A photo from this mornings walk in the woods, with two black labs. Very pretty, but lethal under foot. 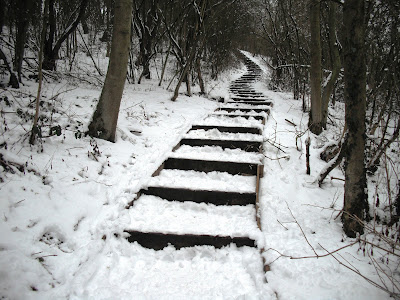 Breakfast was porridge with half a tin of rice pudding added to it, to give it a bit of creaminess. Lunch was a piece of grilled salmon, with the rest of last nights bulgar wheat concotion. I throw nothing away.

How do you like my new arrangements for keeping food cold? Two plastic boxes with lids, on the back lawn half buried in snow, with blocks of ice on the top from the cats outdoor drinking water pots. Inside are three loaves of bread, one salmon portion, a few peas, carton of Clover spread, and elderberry juice ice cubes. 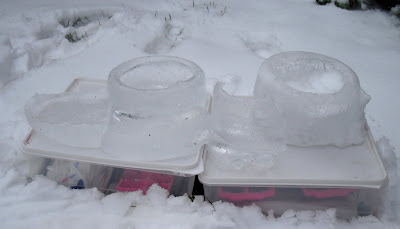 The real fridge is now defrosting. Can you see Garcia's little head at the bottom, looking in. He practically lives here now, I'm thinking of sending an invoice for board and lodgings to his owners up the street. 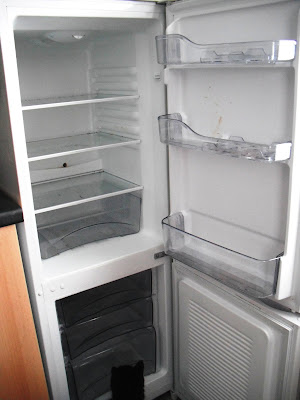 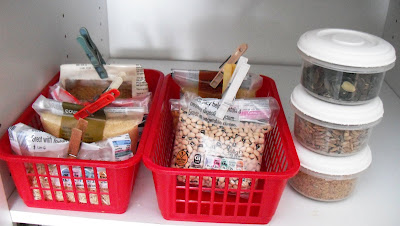 On this shelf, stock cubes, frog spawn (tapioca), cuppa soup, pickled onions, honey, tin spaghetti, tuna fish, (of which I have 49 tins in total), and two cartons of apple juice. 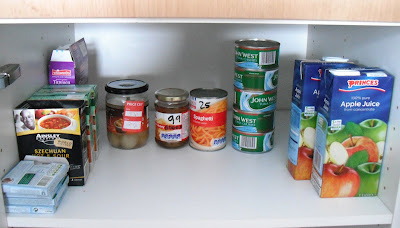 Elsewhere I have four boxes of bran flakes, two bottles of Robinsons peach barley juice, two bags of porridge oats, half a tin of rice pudding, Nescafe and coffee whitener, green tea, half a bag of sugar, olive oil, and various packet sauces and spices. Oh nearly forgot, loads of apples. And that is the total sum of all my food. So what can I make with it, not a lot. Spaghetti on toast for dinner, followed by rice pudding. Or bran flake sandwiches perhaps, ha ha. Possibly rice and tuna fish.

Now I must go shopping, I am craving fresh vegetables. Not only am I running out of food, the cats also have very little left. They need cat litter, which I am hoping to get from Morrisons. I remember in the snowy season last winter it was in short supply because people were buying it to scatter on their driveways, that was quite annoying because it pushed the price up. Toodle pip. Catch you later.
Posted by Meanqueen at 13:57