In the top right hand corner of North Lincolnshire, close to the villages of Thornton Curtis, East Halton, and Barrow on Humber, is the largest monastic gatehouse in England. Although I have been living here a number of years now I have never been to see it. It's about time I did.
Thornton Abbey and Gatehouse is managed by English Heritage. Here is a link to their web site. 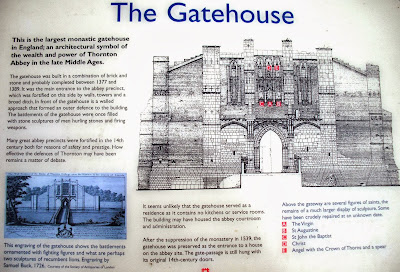 There is more information on Wikipedia, the free online encyclopedia, link here. 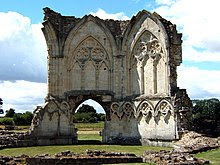 Ruins of Thornton Abbey
Thornton Abbey was founded as a priory in 1139 by William le Gros, the Earl of Yorkshire, and raised to the status of Abbey in 1148. It was a house for Augustinian or black canons. These priests lived a communal life under the Rule of St Augustine but also undertook pastoral duties outside of the Abbey. Officers within the Abbey besides the abbot and prior included a cellarer, bursar, chamberlain, sacrist, kitchener and an infirmer. It is located close to the small North Lincolnshire village of Thornton Curtis.
The abbey was closed in 1539 by Henry VIII as part of the dissolution Thornton was a wealthy and prestigious house valued at the dissolution, at the considerable sum of £591 0s 2 ¾ d.

This is my photograph of the front gate, as you approach from the car park. It looks rather magnificent but on closer inspection most of the brickwork is crumbling. Hardly surprising considering how old it is. I am not sure if any preservation work is planned, or if any has been carried out. There is no obvious evidence of it. 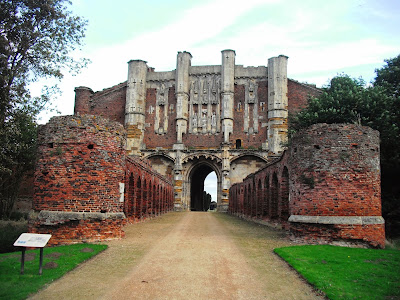 This photo is taken from the English Heritage web site, it's the view of the gatehouse from the inside looking out. 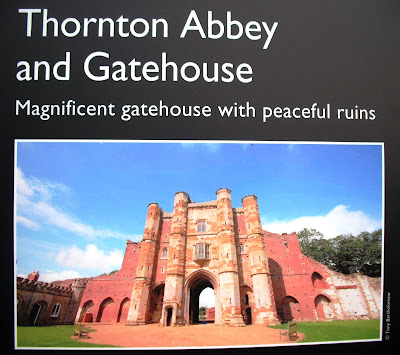 There are ornate carvings above the archway. 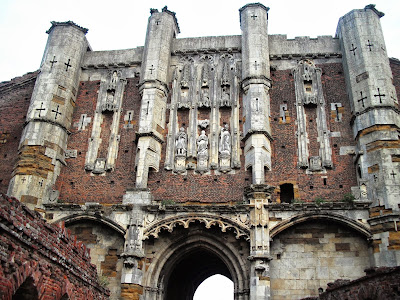 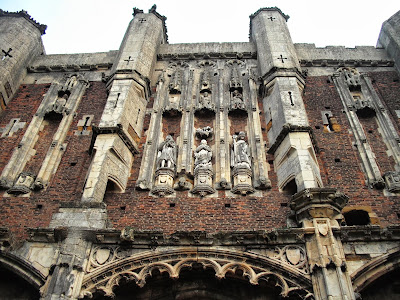 These are the original doors which are now so crumbling from the bottom up, they are secured safely against the walls. Imagine the work that went in to carve doors of this size. 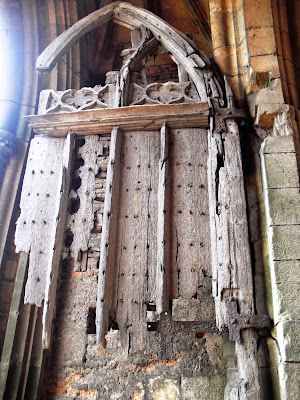 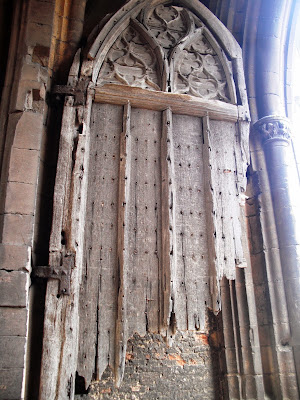 I got as far as peeking through the archway to see what is inside the grounds, when a lady emerged from inside the shop and said she will have to charge me if I go any further. I decided not to pay the £4.10 and walked away. There didn't seem to be much else to look at apart from the gatehouse. I see there is a photo of the last remaining ruins of The Chapter House, (small picture above), apart from that it is all grassland with pleasant walks amongst a few ruins. Nice to spend a couple of hours walking around or picnicking in the sunshine if you are in the area, it's free entry if you are a member of English Heritage. You can walk from Barton along the Humber bank, to Immingham, but any further south and you hit the docks and industrial areas, which are full of chemical works and gas plants. I might go and have a look there one day.
It's sunny again today, so best make the most of it and go outside.
Toodle pip.
Posted by Meanqueen at 09:58