A visit to Tattershall and Coningsby

Hello. I started this post last night, but tiredness overcame me and I went to bed. So this morning, fully refreshed, I resume.

It was a lovely sunny morning so me and the pooch went out today. I am running out of local places to visit so each trip is a little further afield from the one before. This time I headed south through Lincoln and along a 'B' road through Metheringham and Billinghay, and made a stop at a picnic area for lunch. On then to Tattershall. I have been past many times but never had time to stop. The castle is visible from the road, so now is my chance to have a look around. I went in the church first. 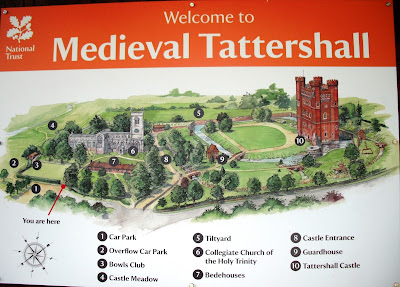 The Collegiate Holy Trinity Church is 180 feet long. All the windows are clear glass, except for the large coloured glass one in the Great Eastern Window. 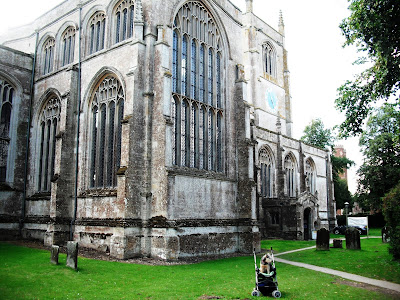 There is a warm welcome inside. Ladies serving cups of tea and cakes, and lots of bricabrac stalls. It looked a bit like lots of charity shops selling donated goods, all clustered together at one end. It was free to go in so I bought a packet of scrumptious home made oaty biscuits. 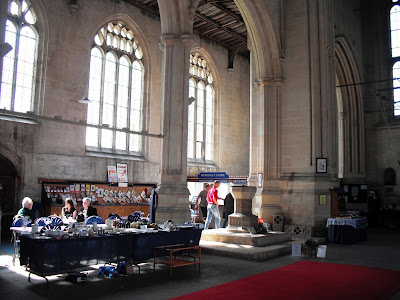 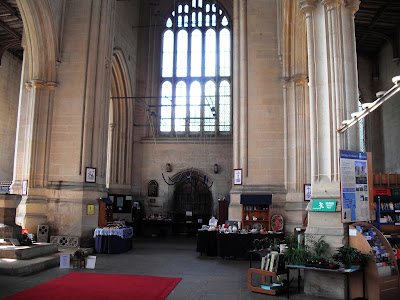 If you look at the map the castle is only a short walk away. The trouble is that once you pass the entrance at the Gatehouse it is hard to push the buggy through the deep shingle surface. Rocky had already had a walk up to this point, and he was struggling to walk through the loose stones, but I persevered and pushed him along on the grass where I could.
The castle is a National Trust property, access is free to the grounds but there is a charge to go inside. The Gatehouse has a shop where they would like you to spend your money, either buying goods or joining up. I didn't want to do either so I bypassed that and took a path to the side. Besides there wasn't room for a buggy inside there. 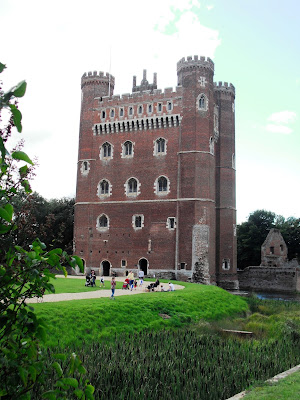 There is a moat around the castle and to get to it you have to cross this small wooden bridge. I don't like the look of those supports underneath it, the whole thing looks a bit dilapidated and could do with replacing. Parts of the moat are also full of reeds. 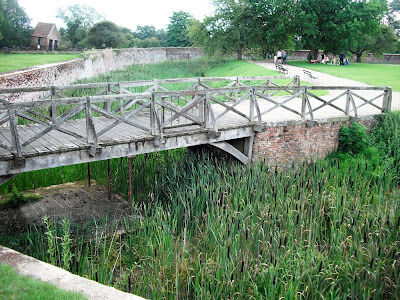 Aaahhh, I can see water there. Apparently the view is very good from the top if you want to climb the stairs. There are six floors, 149 steps. 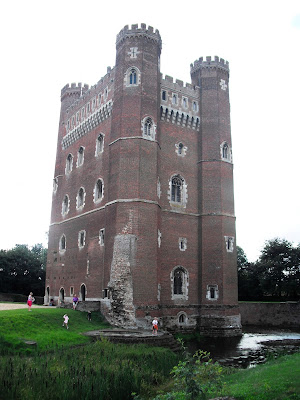 The castle is built of red bricks, by Patrick Cromwell, between 1434 and 1447, as a display of his wealth and power in unstable times. For more information you can look at the web site.  It was a warm sunny day, and nice to see the families out with their children. Lots of space for them to run around in. 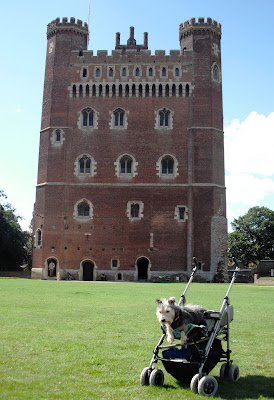 View of the castle from the churchyard. 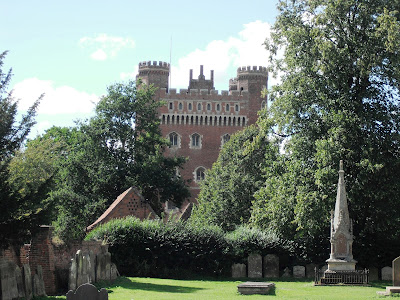 Next I thought we would take a look at the RAF Battle of Britain Memorial Flight  exhibition at nearby Coningsby. Oh dear, I forgot to check that, no dogs. I went in and asked if they could make an exception for an elderly dog in a buggy, but the computer said no, so we had to be content to walk along the outer perimeter for a short distance and peer through the wire fence. 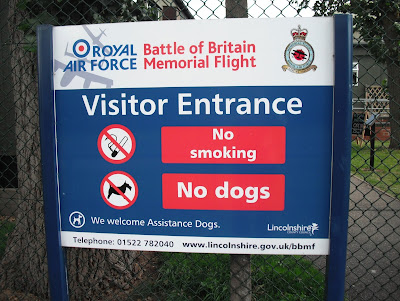 This little gnat was buzzing around, landing and taking off several times, I think they were rookie pilots practicing. 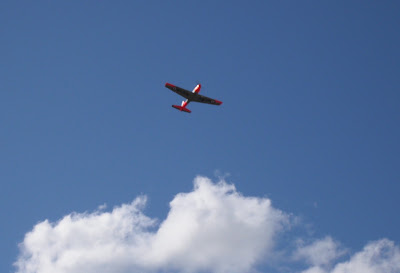 Then it came down and landed, taxiing to it's parking slot. 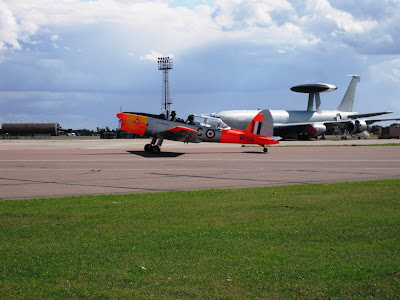 The pilots climbed out and left it in the capable hands of the ground crew for inspection and maintenance. 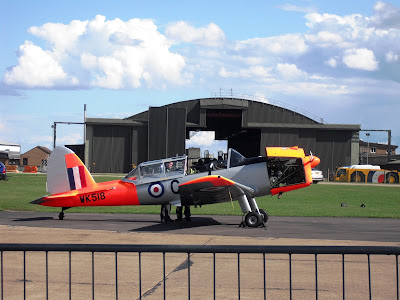 I reckon this plane is strategically placed to block the view from the many enthusiasts poised with their zoom lens cameras along the fence. I spoke to a man and he said it was the same one in this exact spot he had seen on his previous visit, weeks before. 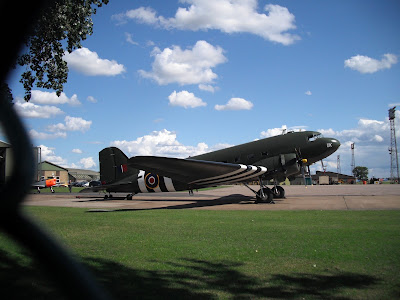 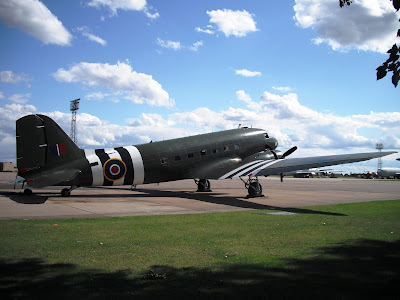 The man told me that these two planes are kitted out with radar, the dishes on the top pick up signals from other aircraft while patrolling the skies. Like an early warning system. 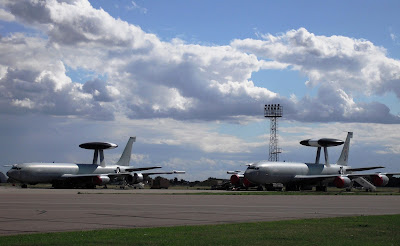 Here is a link to the Battle of Britain Memorial Flight. 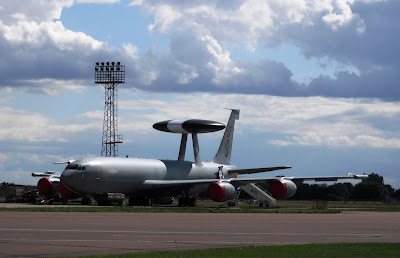 After half an hour of standing and watching, and not much else happening, I decided to go back to the car. Earlier I had heard the boom of several Spitfies taking off, and hoped there would be more, but no luck. Plane spotting needs a lot of patience, maybe it's not for me, ha ha.

Time for a nice steady ride back through the Lincolnshire countryside, with the usual battle through the traffic at Lincoln. A nice relaxing day out, it's good to get out of the house now and again.

Looks like another sunny day today so I'll say Toodle pip and thanks for popping in. A bit more hedge trimming to do, and playing in the summerhouse. Catch you soon.
Posted by Meanqueen at 09:39