Hello, I've had a busy day, Crafty Club, and a talk for a smashing bunch of ladies. We had a lot of fun. I don't think they quite believed what they were hearing when I enthused about my passion for skip diving and buying second hand. Ha ha.
I've been saving this book review for a few days, and will now slot it in to fill a gap. As you know, I like autobiographies, an interesting true story beats anything made up I reckon. This book held my attention till the end, it's the second book from Kevin Lewis, the first one was about his early life in a dysfunctional family. I did wonder if I should have read that one first, but there are plenty of references in this one about his harrowing early life at the hands of an unstable mother who regularly beat and tortured him. 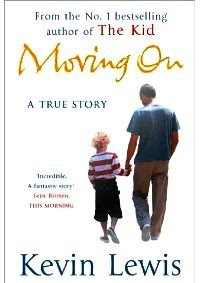 Moving On, starts at the time when Kevin has just finished his first book. By then he was married to Jackie with two children of his own. Jackie had no knowledge of Kevin's childhood, as he has refused to speak about it, but now everything was recorded on paper and Jackie could read it. After much soul searching the decision to publish The Kid, was taken. Old childhood memories resurfaced and he was forced to face up to his demons.
Moving on is a powerful and moving memoir, he describes going back to face Gloria and Dennis, he always called them by their first names, never mother and father.
Finally he talks about his hopes and dreams and ambitions for the future. Moving On is about making positive use of his past, to enable him to build a new life for him and his family.
I found the book interesting and inspiring, to read about how one man has managed to make a good life for himself after such a rotten start. Reading the reviews on Amazon, it seems that a few people who read the first book, found this one disappointing, which I was surprised about, as I thought it was a good read. I don't feel the need to now read the first one, this book gives a complete picture of the whole story.
Thanks for popping in. Toodle pip