Using up the smellies

Hello. I've been on a mission to use up the toiletries that I already have before buying more. The hair conditioner is gone, I used it instead of shampoo. The Value baby shampoo has been used up, and a new bottle of cheap Aldi shampoo is now in use. I could use the bath foam on my hair, but it will get used when I have a bath. I have two deodorants, one given to me by my sister, and the other from a friend, both didn't like them. I don't care, it's all the same to me, I have no particular preference when it comes to under arm spray.
The Nivea sun lotion is being used as a face moisturizer. I got the Yardley violets spray out of a skip, someone's  house clearance. The Youth Dew perfume is about 35 years old, it doesn't spray very well, that's why it has lasted a long time, ha ha. I don't buy perfume now, I think it was about 35 years ago when I last bought some. The So Soft body oil gets used as a face moisturizer, I don't feel the need to moisturize my whole body. What's the point of scrubbing yourself clean, only to block your pores with gunge. The Baby lotion also gets slapped on my face from time to time, as does the Aloe Vera Jelly.
I am holding off buying anything new, until I really have to. I use everything sparingly so it lasts ages. I don't need a lot of bottles cluttering up my bathroom cabinet, these few items will last me for a while.

I've just had a bowl of fabulous soup, and plenty left for tomorrow. I found two packs of celery in the small Tesco yesterday when I popped in on my way back from the council dump. Always worth a look if passing. Aha, celery soup I thought when I saw them. I also threw in a few other bits and bobs which needed using up. Half a dozen mushrooms, half a parsnip, a carrot, a potato, and a handful of spinach. I used six sticks of celery, still plenty left for another batch. Chuck in some spices, simmer for ten minutes, zap with a stick blender. 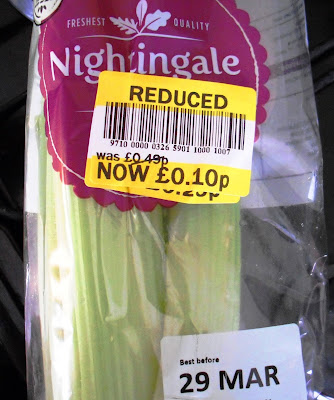 It was bloomin lovely. I love these chuck it in and see what happens kind of soups. 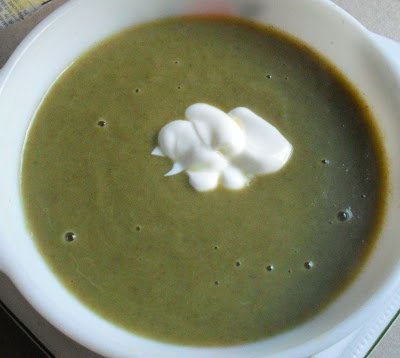 I did my walk early today, and I have hit the 250 miles, YAY. Trouble is it took me over three hours to do it, ha ha. Paul was in his garden as I passed so I stopped to say hello to him. Then I popped in to see the other Paul, as he was on a late shift. I didn't stop long there as he was watching a film on TV. Then I saw that Phil was in his garden and as I hadn't seen him for ages I stopped to see how he was. He was hobbling because he had missed the step as he was getting out of his lorry, and pulled a muscle in his leg. He said come on in and see Angela, so I did and ended up staying for a coffee, two coffees in fact and some lunch. Angela has a new hobby of painting up old furniture to give it a new lease of life, and she is making a good job of it. I was dead impressed.

Almost the end of the month, are you having one last splurge to top your miles up? Only another nine months to go. You can make a start on the 1st of April if you want to. The next target to work towards is 500 miles at the end of June. Or if you are a late starter try for the 250 miles in three months. Come on, put your best foot forward, you can do it.

The kids are all in for the night, I'll give Heidi her tablet shortly. She has been such a good girl, mostly I get it straight in and she swallows it, sometimes my aim is not so good and she spits it out, ha ha. But whatever happens she is never annoyed with me, always after lots of cuddles.

Thanks for popping in. We'll catch up soon.
Toodle pip