A perfect night out.

Hello. I'm just back from a fab night out. The Scunthorpe Male Voice Choir were joined by similar choirs from steel towns in the north of England. It was a full house, tickets were sold out months in advance. I had a front row seat, and Leslie Garrett was right in front of me. It was brilliant. 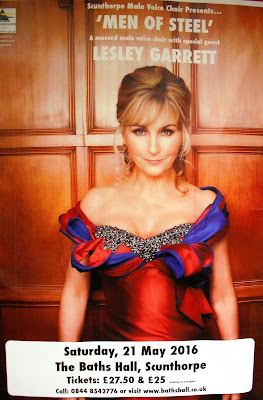 There were songs for all tastes, it was hard to pick a favourite. The choirs sang I Dream a Dream, and I immediately had Susan Boyle's voice in my head. They sang it beautifully. Unchained Melody, and The Rose,  are also two of my favourites. Lesley did opera, I don't know how she reaches those high notes, and she did some smashing songs from the shows. There was a medley from The Sound Of Music which she starred in, in London.

I've found a video of Lesley with the Peterborough Male Voice Choir, singing You'll Never Walk Alone, she sang this as a closing number tonight. The combination of a female opera singer with a male voice choir are just perfect together.

I've just noticed that it's past midnight, so I'd better get to bed. I'm going to adjust the date to the 21st, ha ha. My birthday treats are over, and I've really enjoyed myself.

Thanks for popping in. We'll catch up soon. Toodle pip
Posted by Meanqueen at 23:30