Hello, I've loaded the pics so let's see if I can remember where they were all taken. There was no wifi at Mankinholes Youth Hostel, but I did take the small computer so I could at least upload the photo's from the camera and edit them.
I was the only person staying at the hostel apart from the volunteer warden, so I virtually had the place to myself. There is no TV, but plenty of books and magazines to read. I took my own food for two evening meals and two breakfasts, and enough for packup nibbles during the day. Packets and tins are useful for this and I don't mind if I have the same meals twice, pasta and baked beans. Cheesy biscuits, malt loaf, and currant buns are good to have in the rucksack. I always take boiled eggs as well, great to sooth a rumbling tum when out on the hills. Diluted juice drinks in the bottles.
The drive up to the hostel from the main A646 road between Halifax and Todmorden is a bit narrow and twisty. Hair pin bends, one is so tight it requires a shunt manoeuvre. There is a small car park between two stone pillars. I arrived about lunch time, the hostel didn't open till 5pm but I expected that, most are closed in the daytime. I had an idea for a shortish afternoon walk so I set off down a track opposite the hostel which soon opened up along the edge of a field. Already I was getting a sense of what's in store, fantastic views, love this area. 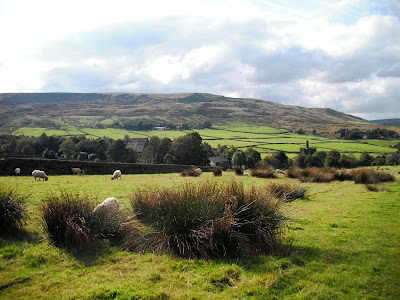 I came out onto a road. This looks at first glance like it is a very posh residence. Someone probably does live here, but at the entrance is a sign saying it is an activity centre for young people. If you note the top of the tower, it is the same design as the old abandoned mill next to it. 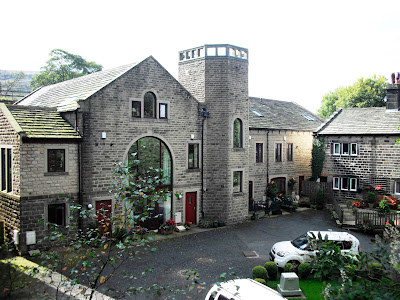 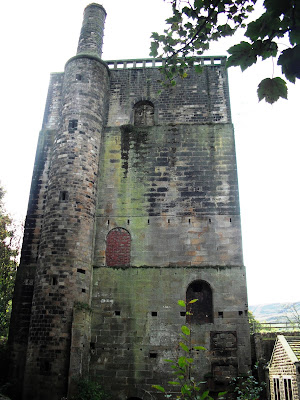 There are cottages similar to this, big and small, scattered all around here. Some of them perched precariously high on the hillside. 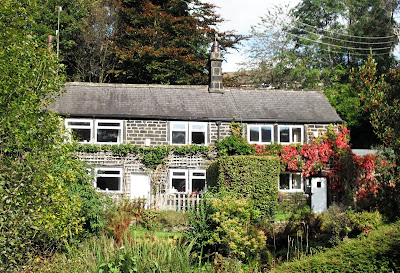 I joined the Calderdale Way, a long distance path, to Todmorden, and came into the graveyard of a church I have seen on a previous excursion. I'ts high on a hillside and has been left to it's own devices, so is very overgrown.  Looks kind of spooky to me. 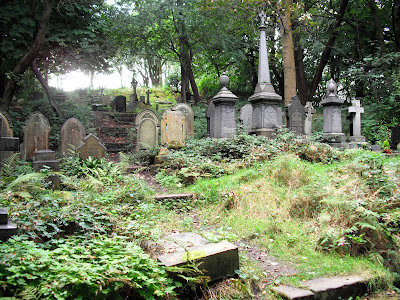 I like Todmorden, have seen it before, so I got on the canal tow path to continue my walk. Not many boats about at present. 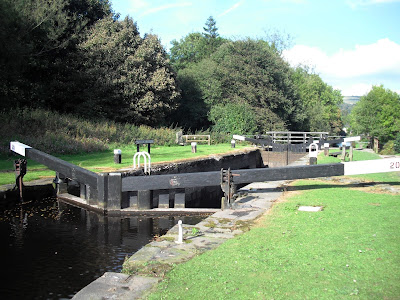 That's the railway bridge going over the top. Twas a lovely sunny day, with a cool breeze. 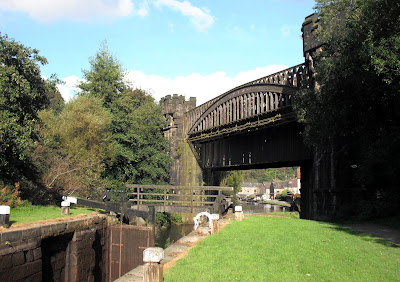 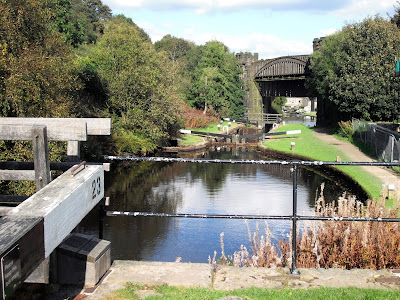 I happened to be standing on a small stone bridge for a few minutes while checking my location on the map. I like to know exactly where I am. A local chappie on a bike asked if I wanted directions. I said no thanks, I'm just planning the next part of the route. He started to tell me stories about the history of the place so I chatted to him thinking he might be looking for someone to talk to.
Then he told me about the famous award winning fish and chip shop called Grandma Pollards just round the corner, they make wonderful home made pies. I went with him to have a look. They were ready to close for the day but the boss beckoned us to come in. Then I got the whole story from Tony all about the shop being in his family for 50 odd years and him taking it over from his father. He split a potato and onion pie between the three of us to taste. It was nice.
Tony was a jolly sort, the banter between us was hilarious, he could have been a standup comedian, we made a great double act. The shop was ready to close so we all stepped out onto the pavement. A couple came out of the restaurant to say a few words to Tony, and I was introduced to the lady. I thought the man looked familiar but didn't say anything. Then the lady introduced me to her husband, Tony Booth. Blimey, yes it was, Tony Booth father of Cherie Blair. Chuffin heck. I remember him years ago in comedy sitcoms. He is in his mid eighties now. This chance meeting has prompted me to google him. By 'eck, he has led a colourful life. If you want to read more try this story in the Daily Mirror.
I finally managed to get away and continue my walk, so off I went down the canal tow path. I eventually came off it and turned north on the Pennine Bridleway which for a while gave me wonderful views down in the valley with the canal in the bottom. 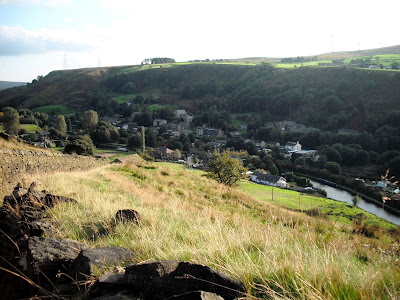 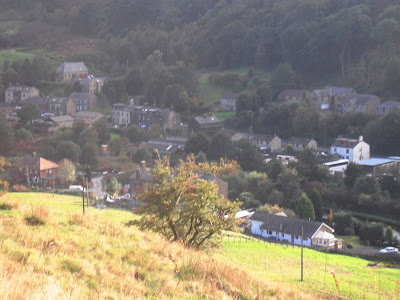 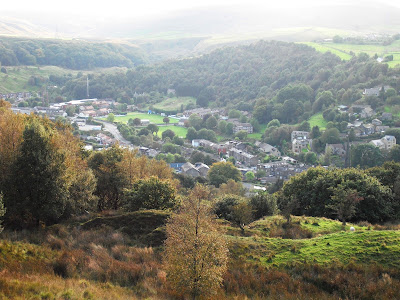 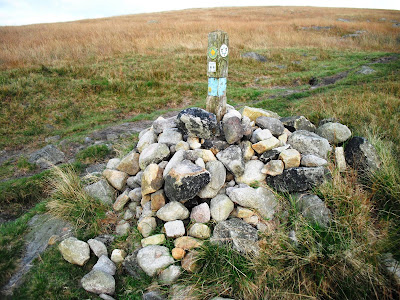 I followed this track across the moorlands until it joined a road, which took me to Lumbutts, and further on to the Hostel, arriving at 6pm. The door was open and Derek the warden signed me in. 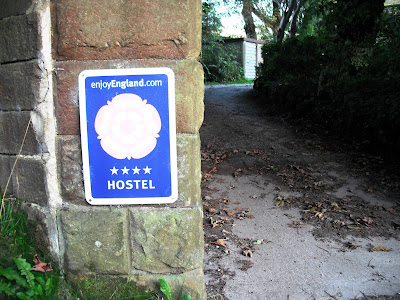 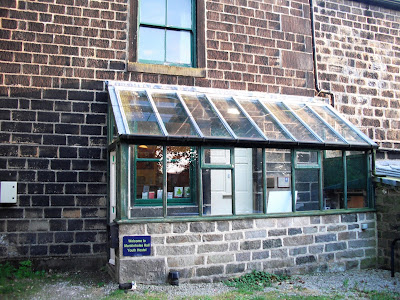 It wasn't a long walk today, 7 miles, as I only had the afternoon to do it, and also there are a lot of hills to climb around here, so I am not going to clock up the miles as I would do on the flat. If I hadn't stopped to chat for so long I would have done more, but if I hadn't spoken to the man on the bike, I would never have met a famous person. Tomorrow will be a full day so I'll check the map for a route.

Thanks for popping in. We'll catch up soon with day 2.
Toodle pip
Posted by Meanqueen at 14:19