Good Morning. I think most people like to sit for a while and watch the sea. It can be a calm and relaxing experience with the waves gently lapping the shoreline, or an exciting and spectacular performance of waves crashing crazily over a rocky outcrop. There is something mesmerizing about watching something with so many different features
Another exhibit in the Ferens Gallery aroused my curiosity. One enters a small dark room rather like a small cinema. There are no lights, it's total blackness. On one wall is the screen, with one small bench for those who wish to sit and linger awhile. The rest of the space is standing only. I poked my head around the corner to catch a glimpse of what was being shown, and saw  the sea. Hmmm, shall I keep watching , it looks a bit boring.
I sat down and let the film wash over me. The only sound was the shusssshing of the waves, which had a relaxing effect. Every few seconds the picture changed, the same view but at different times of the day, and different weather conditions. Often there was nothing much to look at, no sign of life, just the sea.
I found myself peering through fog searching for any indication that there was life out there. Was that a boat on the horizon or was it a figment of my imagination? I think I can see a bridge, or maybe the fog is playing tricks with my vision.
A succession of pictures when not very much was happening was quickly interrupted by movement in the foreground. Someone walking a dog from one side to the other. Someone riding a bicycle, stopping to check his brakes, then moving on. These little quirky disturbances jolted my almost dozing brain into alertness.
Just when I was getting used to the pattern of  the mostly grey weather changes, my eyes were assaulted with a blinding flash of colour. Wow, that grabbed my attention and I began to find the whole thing quite like a musical performance. I could imagine the music in my head, each changing scene was played by different instruments. The sunset was the whole orchestra building up into the loudest finale. 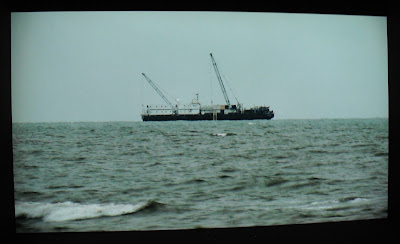 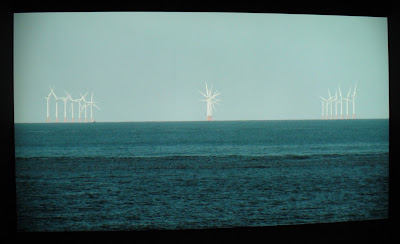 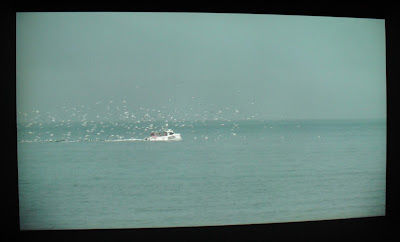 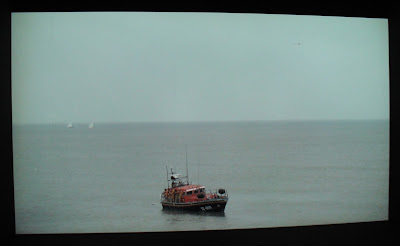 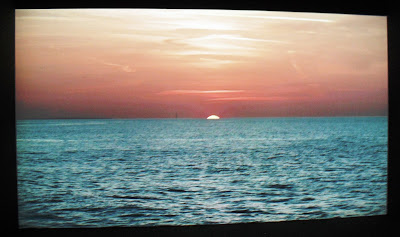 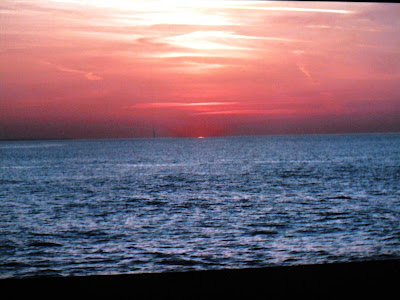 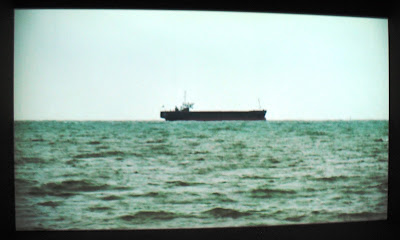 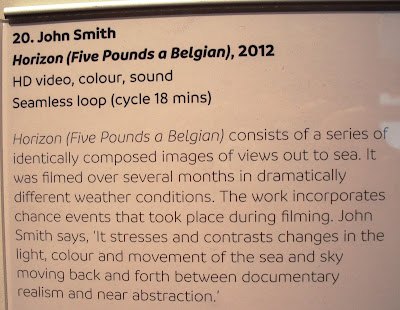 The film is on a loop and I searched for the first frame I saw to tell me when I had seen it all. It's about eighteen minutes. I was so lost in it that I hadn't noticed several people had crept in behind me. After goooogleing I found this video of the artist John Smith. Have a look, listen to his thought processes as he was making the film. See what you think.

Hey, it's looking like a nice day outside. I'm off out. Thanks for popping in. We'll catch up soon.
Toodle pip
Posted by Meanqueen at 10:19