Hello. I remember when the news came out about the massacre of 69 young people on the island of Utoya in 2011, and wondered what kind of person could do that. There were some court scenes on the television of the trial, and Anders Breivik came across as smirking, with no remorse whatsoever about what he had done. What usually happens when such murderous atrocities occur is that the perpetrator is often gunned down in a shoot out, but on this occasion Breivik gave himself up. He momentarily decided he wanted to live. 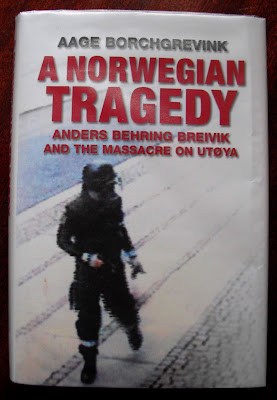 The newspapers were full of 'how could this have happened,' stories, what kind of a mind could be so evil? This book is a study of Breveik's life from childhood to the time he was arrested, painstakingly pieced together by the author. It charts the difficult relationship he had with his mother, the graffiti gangs he ran around with, and his obsession with computer war games. In his disturbed mind the differences between real life and imaginary avatars battling it out on a screen blurred into one, and was not clear cut. The book digs deep into the psychological profile of Breveik. He was very much a lone psychopath/sociopath who tried to fit in but never really succeeding.

The first part of the book is about the bombings in the centre of Oslo which Breveit carried out. There is a lot about the political climate at that time, which I must admit I skimmed through. Levels of immigration were the cause of a lot of the turmoil on the streets. Breveik's motives were thought to be based on this.

I am always interested in how the human mind can take on so many different personas, and this one is as complicated as they come. An interesting read, but maybe not for the squeamish or easily upset.

This book is reviewed on Amazon.

Thanks for popping in, we'll catch up soon.
Toodle pip
Posted by Meanqueen at 14:17