Hello. Had a day off yesterday, was busy. On Friday I called in to see my friend Angela as I was passing. It's hard to tell if she is in or not by glancing at her house, because it's at the end of a long driveway, and I have always been reluctant to knock the door in case she is in bed, she works nights sometimes. However, on Friday I saw her in the garden so I knew it was safe to call. She invited me in for a coffee, and gave me the news that she is now retired from her job. We like to talk arts and crafts, she is very good at furniture refurbishment, especially re upholstery, and it's always good to swap ideas.
Like me, Angela is also a skip diver, and car boot browser, we love a second hand bargain, better if it's free. She recently found these small lamps in a skip, they need some attention and she hasn't got time to deal with them right now, she was going to give them to a charity shop, but I said I would clean them up and find something to replace the rusted metal on them.  I'll start with a good scrub in soapy water. 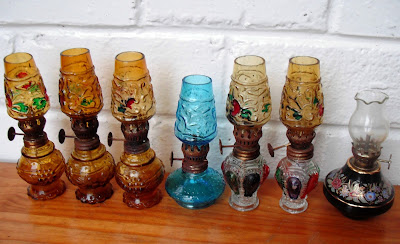 Yesterday I went to an Embroiderers Guild meeting in Scunthorpe, to see what they get up to. I was made very welcome, it was a big room in a church hall, rows of tables all around the perimeter. People were working on their own projects, then there was a set piece of embroidery to complete. They are having a celebration in the summer and they need bunting to decorate the place. Each flag was going to be a letter and we were given a piece of felt like fabric, the design, some thread, and instructions. It was a bit like cross stitch, but straight lines and flowers. Simple enough, but not really my thing. The lady next to me explained about counting squares on the pattern, but I just wasn't getting it, and wasn't really interested.

I don't like following instructions, prefer to make things up as I go along, and as all the letters had to be the same, I felt it was a bit like being at school, or on a factory production line. Oh dear, I'm a bit of a rebel. When we made the banner for our Chat and Craft group we were allocated a letter and told to use any medium we liked. Much better, but when the group is part of a national association you have to do things in a certain way. Luckily the lady next to me gave me a hand, but I gave up with it, so she suggested I go and have a look at some of the work members had displayed on the tables. I really enjoyed that bit because it was just what I like to do.

They also had a sales table, with bits and bobs of a crafty nature which people no longer wanted. I spent £1. It was 50p for this roll of erm, thick felt like matting. Not sure what it is, or what it's used for, but no doubt it will come in useful for something. 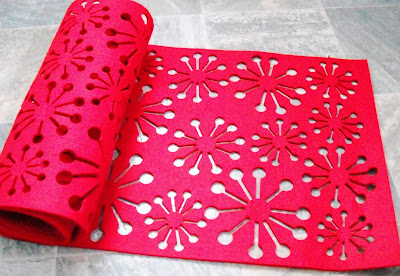 This little hessian bag was 50p. It looks like in might have held bottles of smellies at some point, there is a divider inside. I could stitch onto it, tart it up a bit, give it a new life. 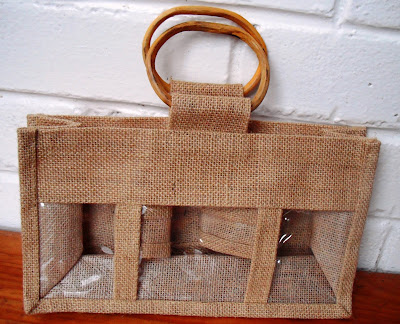 I will go to the group again, they meet once a month, and different activities are planned. I haven't decided whether to join or not though, it's a bit pricey. £5 for an afternoon session, (2 hours) and if you do the morning session on the same day and bring your own work, that's also two hours for £5. Membership for the branch is £32, and if you want to join the national EG it's an additional £35. So, £67 for both. I can go twice more before I decide.

I have a few wrapped rings now, they are mainly curtain rings. I have filled some of the middles in, they look quite nice like that, will do some more. Not sure exactly what I will do with them, but I have an idea. 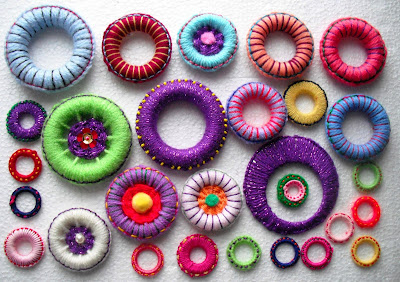 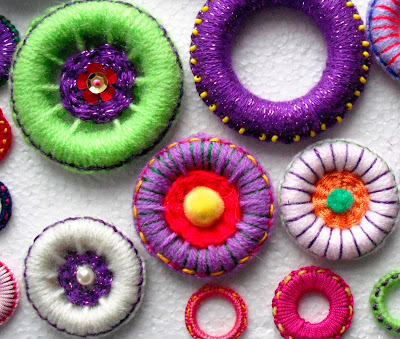 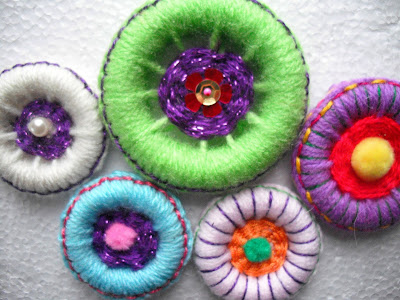 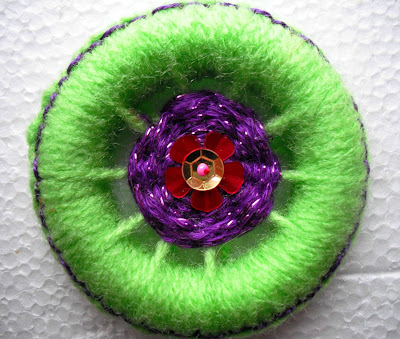 The bleeding tissue paper picture is finished, next job is to frame it. Watch this space.

Going to have my lunch now, then go out. It's dry and mild here in North Lincolnshire. Thanks for all the comments on Mark's Aussie post, I sent him a link so he is reading them, and he has commented. Thanks for popping in, we'll catch up soon.
Toodle pip
Posted by Meanqueen at 13:09