It was later in the day after a full days walking, that I decided to take a look at Mallyan Spout Waterfall. A slight detour off the Rail Trail, I followed the signposts. There was a lot of steps, up and down, as I followed the sound of the running water alongside West Beck. 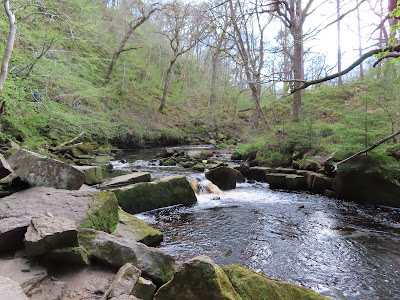 I met a walker coming towards me, he asked if I was going to see the waterfall. I said yes, and he said there wasn't much to see. I was already thinking do I have time for this, and was it worth the bother. He showed me a photograph that he had taken on his ipad, it was fast running water over rocks. I said it looked ok. I carried on thinking I am half way there now, might as well go and have a look. I will curse myself if I miss something because I hadn't made the effort. 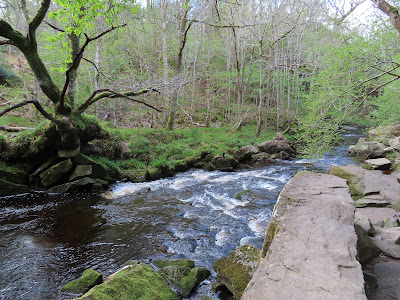 Up ahead I saw two people clambering over rocks. The woman looked like she was having some difficulty. I stopped for a minute to let them get ahead. I was almost ready to give up feeling quite tired by then. I sat down and took these photo's. 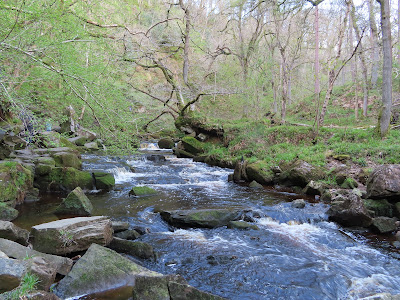 I lost sight of them for a few seconds as they went round a corner. Then the man's head popped out he was beckoning me to keep coming. This is what I saw just around the bend. . 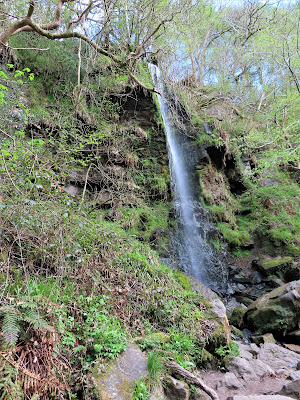 The man with the ipad had stopped before he got there and turned round. He missed it. I'm glad the man up ahead waved me on.
From there it was a matter of backtracking to the junction where I had seen a signpost back to Goathland. I was relieved when the track took me straight into the field where I was camping. Twelve miles that day, I slept well after that.
More about the Yorkshire trip to follow.
Toodle pip.   ilona
Posted by Meanqueen at 12:01