Found a bargain or two.

The local car boot sale was very busy this morning, perhaps the brilliant sunshine had something to do with it. I was looking for a baby bath which I want to make into a garden pond, I found one for £5 but they wouldn't go lower, so I walked away. One man had two tables full of stuff and several boxes in front, with a notice saying everything is 20p. Worth a look I thought, even better than a Pound shop.

I got a couple of handbags with chrome handles that can easily be removed, and transplanted onto my hand made bags, and a large net curtain which I will use to cover my brassicas when they start appearing. I am going to step up my battle with the cabbage white butterflies this year. 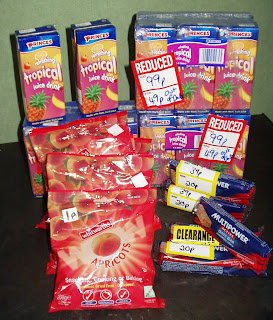 I popped in the nearby Poundstretcher store, I have noticed that a lot of discount stores now have an expanding food section, so inevitably there will be many more opportunities to find out of date stuff. I was lucky, I got three packs of 6 pack Princes Tropical Fruit drink, reduced from 99p to 49p. Five cherry coconut oat bars reduced from 39p to 20p, and the best find was five packets of Whitworths apricots for 1p each, that's right, one pence each!

Next stop was the DIY store for a bag of compost for my forthcoming seed sowing. Outside the door was a beautiful border collie, mostly white with a few brown and black splodges, with it's lead loosely round one of those concrete bollards. I felt a bit concerned that someone had left it there, probably to go inside the shop. A few weeks ago I saw a terrible story in the newspapers about an elderly man who had left his dog tied up outside a supermarket, when he came back it had gone. Two youths had taken it and killed it, heartbreaking story.
The collie was called Sasha, I looked at the tag on it's collar, no contact details though. I went into the shop, but had to come back out again because I was so worried that she might come to harm. Call me an interfering old woman if you like, but I could not walk away until I knew she was safe. I waited for nearly half an hour watching Sasha looking for it's owner, I was beginning to think she may have been abandoned. Eventually a young woman appeared, and at once Sasha acknowledged that her owner had come for her. The woman adjusted the dogs collar which I had noticed wasn't fastened properly, a clear indication that she was the owner. Was I relieved! I spoke to her about my concerns , I hope she doesn't leave the dog alone again.
Daily spend - £1 car boot sale. £4.99 compost.
£3.57 Poundstretcher.
Posted by Meanqueen at 15:24

Email ThisBlogThis!Share to TwitterShare to FacebookShare to Pinterest
Labels: bargains