A day out in Holmfirth

I don't care how much fuel costs, if I want to go out I will go out. The bus pass comes in handy for free travel, but today I had the fancy of going to Holmfirth, home of 'Last of the Summer Wine', so it was the car, as it would have taken all day to get there on the bus. Seventy miles and one and a half hours, later I arrived at 11.30am. What a picturesque place it is, nestled in the valley just south of Huddersfield, exactly as you see it on the tele.
I thought Sid's Cafe would be a good place to start, there was Compo waiting for me. Sorry to say, I didn't go in, I sat on the bench outside the church opposite, and ate my sandwiches. 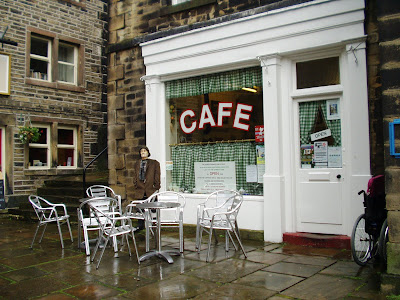 Just outside is the starting point for the tour bus, and luckily it came along just as the rain came down. I got front seat for a good view and paid my £6. For fortyfive minutes we were taken up and down the narrow lanes, the driver did a comentary and told us some of the filming secrets. 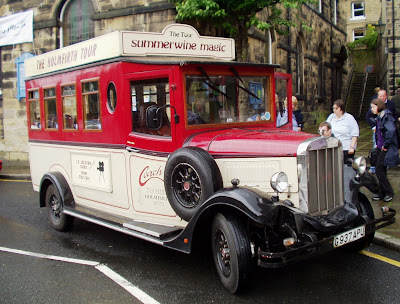 Everyone thinks all the houses in the programme are in the same village, but they are not. They are in several villages dotted around Holmfirth. When all the trucks come with all the equipment they are parked in a large park, and the actors and props have to be ferried around in small vehicles due to the width restrictions of the roads. Also some of the scenes are shot in the studios. Aunty Wainrights junk shop doesn't exist, it is a house made to look like a shop, and the cafe has to be changed to make the counter on the left hand side, but in reality it is only a wall. The scenes showing Ivy going into the kitchen are shot in the studios because there is no kitchen behind the counter.

When we got back the rain had stopped and the sun came out, what luck! I set off for a walk up into the hills, I wanted to be high up and admire the views. The Ordnance Survey map was very useful, I did a circular walk following the footpaths. Here are a couple photo's. 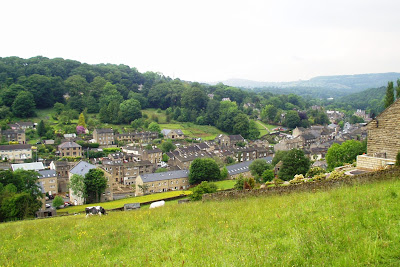 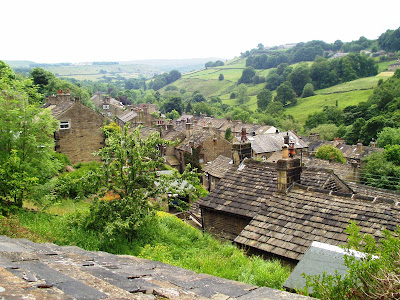 When you are in Holmfirth you have to go and see Nora Batty's cottage. Remember the railings around the balcony by the front door, well the the balcony is not very wide, so for filming they have to build an extension, like a wooden platform so everything can fit on it. Also they never show the top story of the building, in the programme it is a one up one down cottage, in reality it has three floors. 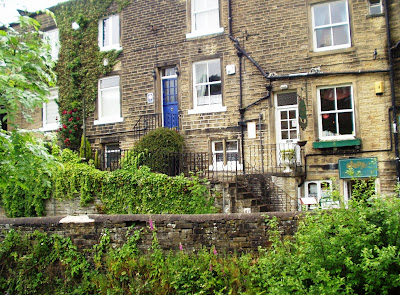 The people living in Holmfirth must be very fit, it is full of steep and narrow streets, some of which you can't take a car down. The only thing that spoils it is all the traffic going through it, it's a pity they don't have a bypass, but I am not sure where they could put one without blowing up millions of tons of rocks and destroying the beauty of the place.
Posted by Meanqueen at 21:16