Keeping in touch with the past

I got back lateish last night from the wedding in Nuneaton on Friday, managed to make it into a two day jolly. The bride and groom, Adam and Gemma, looked lovely, here is a photo I took outside in the park. It is not as sharp as it should be as there was a bit of a jostle for places, and they were both having fun so it was difficult to snap them at the exact moment for a perfect picture. 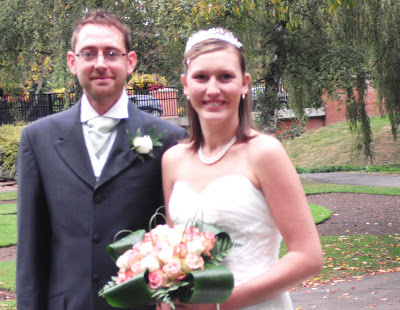 After the service we all walked to Adam's favourite hostelry, The Jail House, for a meal and entertainment, then we went on to the Conservative Club where more guests arrived for the evening disco. At this point I was very pleased that I had dressed sensibly, in black trousers, soft little boots, flowery top, and a jacket, all from charity shops except the trousers which I have had for years. The walk to the club was a bit chilly for some, but I was ok. A lot of the ladies were tottering around in high heels and suffering the consequences of sore feet. My feet were lovely however, as I threw myself around the dance floor to Sweet Soul Music, the moment that starts I just have to get up. I gave up dressing for fashion years ago, now I dress for me, and my style is comfortable.
After an overnight stay at my sister's house in Burton upon Trent, she wasn't there and her bed is lovely and comfortable, I had a look round the town. This is where I grew up so I was keen to see some of the changes, some of them good some not so good. The traffic seems to have increased tenfold, there are two bridges to cross the River Trent so I decided to cross it early because later it was going to become almost gridlocked. I parked a short distance away and walked into town.
I had to have a stroll over the long foot bridge which goes from the back of the market place, over the washlands to Stapenhill Gardens on the other side of the river. This area flooded regularly when the river burst it's banks. It used to be just wild rough ground, now it has footpaths criss crossing it has been turned into a lovely country park. This is the sign in the ironwork half way along the bridge. 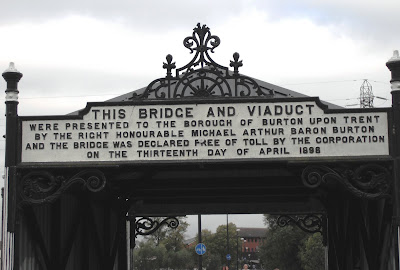 This is the point where the bridge crosses the river. I had a loaf of bread which I fed to the swans and geese, it took all of three seconds for it to be demolished, then I made a hasty retreat as the word got around that there was food, and another fifty thousand birds appeared. Maybe I should have bought a pallet load for them, ha ha. 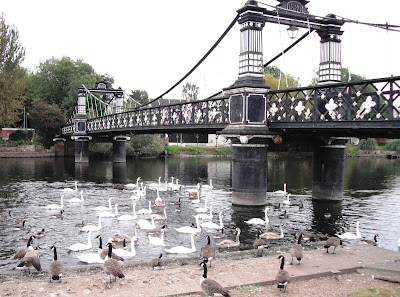 I remember playing in the Stapenhill Gardens when I was a child, mum would bring us on the bus, we loved it there. The flower beds had little footpaths and steps between them which we merrily ran up and down. It's nice to see that the council are keeping things tidy, although there are no flowers at present it still brings back memories. 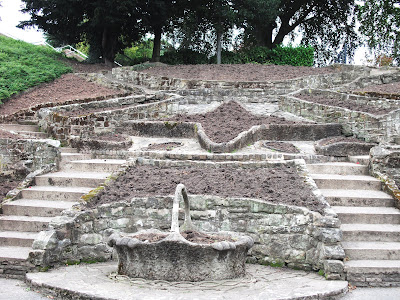 The big white swan is still there, this is also filled with flowers in the spring. As a focal point in the centre of the gardens it must have been photographed millions of times. 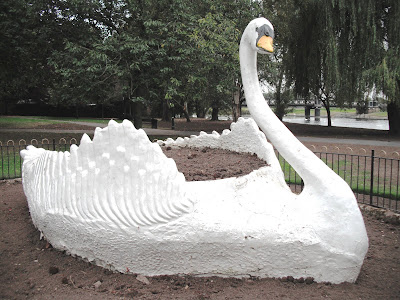 A lot of the town is pedestrianised now, with modern shopping malls. I used to spend my Saturdays around the market when I was a teenager, spending my small wages on clothes, makeup, and magazines. The outdoor market has been downsized now, due to the economic climate, but the indoor market is still vibrant. It was a pleasure to walk round, light and airy, and clean and tidy. I even recognised some of the stall names, though I'm not sure that the original people are still running them.
The old Woolies in the High Street where I worked in 1965 is now a Wetherspoons pub, my old optition is still there, Lancaster and Thorpe, and the leather shop where I worked for all of five days, Start and Tremayne, is still there. Of course over the years all the new names have moved into the town, the people in the area are well served now and don't need to go to nearby Derby like they used to.
The rest of the day was taken up with visiting my uncle Stan, he is a lively gentleman of 86 years young, his wife Pat cooked us up a lovely lunch. From there I visited my lady lorry driving friend, Paddy and her husband Joe, at Melbourne just outside Derby. It was good to see her, and talk about the old days of trucking. Paddy was 73 last week and she is still driving her 44 tonner. As she was late starting her driving career, 50 something, she still has diesel in her veins, although she admitted that the job has changed and it isn't as good as it used to be. I tried to persuade her to retire, and go off touring in their motorhome, one day she might just do that. I have found an interview that Paddy did with the late John Peel for Home Truths on Radio 4, six years ago. She talks about retiring then. Click to see photo's and listen.
http://www.bbc.co.uk/radio4/hometruths/20031117_lady_lorry_driver.shtml
I love catching up with old friends, we have many people who come and go in our lives, but only a few who stay forever. Value your true friends and don't lose them.
Posted by Meanqueen at 11:00