A walk on the wild side

Hi, I feel a marathon post coming up, you might like to read it in sections. I had a fantastic mini holiday, walking in Yorkshire. I set off on Friday lunchtime and had a look round Saltaire near Bradford in the afternoon. Picturesque Saltaire is a UNESCO World Heritage Site. The village has been preserved in all it's Victorian glory. They have an Arts Festival on over ten days, and as I don't know the story of Saltaire I thought it would be a good opportunity to combine a visit with my holiday. I spent a couple of hours getting my bearings, street map in hand, and decided to visit again over the weekend because that's when most of the activities and entertainment was taking place.
I got to the Youth Hostel at Haworth at 5pm. 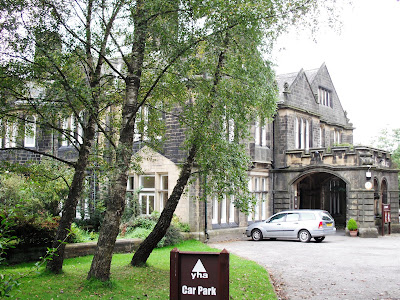 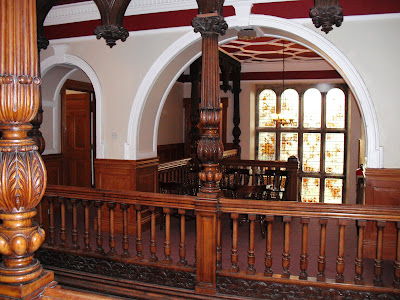 You meet some very interesting people at Youth Hostels. I was there four nights, and one of my room mates was a lady in her sixties who was walking from Edinburgh to Manchester. Another was a young lady from Tiawan, on her way to Newcastle University to start her course. Then there was the couple from New Zealand who were touring the UK for five weeks, their daughter, who now lives in the UK was also staying there with her friends. Another lady I got chatting to was in her seventies and goes hosteling regularly, she loves it.

I sat in the lounge on the Friday night, studying my maps and working out which footpaths I was going to follow, and got chatting to a friendly chappie. After an hour we were getting on great, so he asked me if he could come along on my walk the next day. I said yes, nice to have some company.

It was a fantastic day, we ambled through Haworth main street, had a look at the church then set off. I did the map reading and oh dear, we got lost a couple of times. We had a bit of everything, tramping through fields, sloshing through boggy moors, scrambling up steep banks, climbing rocks, and marching along the road. I couldn't resist stopping at a lovely country pub and partaking of a half pint of Theakston's Old Peculiar, my favourite ale. We had such a laugh. The highlight was when we sat on a big rock on the top of Penistone Country Park, it had fantastic views. Suddenly overhead we looked up to see the Red Arrows passing, what a bonus.

On the way back I needed to dive behind a bush, as you do, so my friend walked on. I noticed a lot of scraps of paper strewn about and saw that there was a letter and some membership cards. I was just thinking that some people are so inconsiderate littering the place up, when I noticed a handbag with most of it's contents still inside. I was shocked and wondered what had happened to the woman who owned it. I picked all the bits up and found a wallet with bank cards in it, and two cheque books. My friend came looking for me as I had been gone a long time. We decided to take it straight to the police station, but found it was locked, so I used the phone on the wall to talk to someone. It transpired that the bag had been reported stolen from a car, they said they would contact the owner and she would ring me to arrange to pick it up. I got a phone call half an hour later, the police said the lady was about to go on holiday and a police officer would collect it the following morning. I was relieved to hear that she hadn't been attacked, and pleased she was going to get her bag back, even though she had probably lost some cash and had cancelled her credit cards. Here are some pictures from our day out. 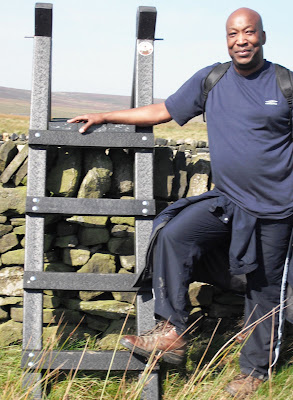 The main street in Haworth. The steep cobbled street is lined with flower boxes at the front of each house. 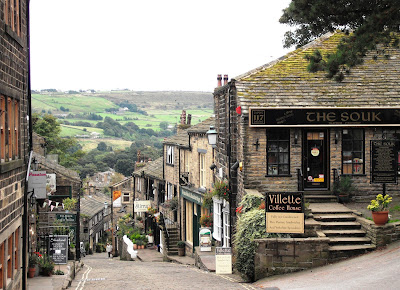 We had a look at Haworth Railway Station. We don't have time to travel on a train today. 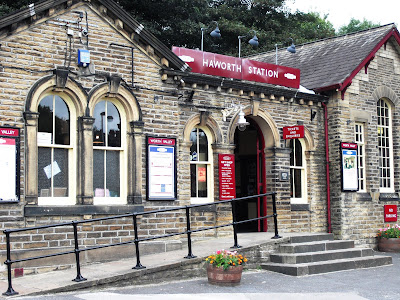 Haworth Church at the top of the main street. the Bronte's are buried in a vault inside the church, except for Anne who was buried at Scarborough. 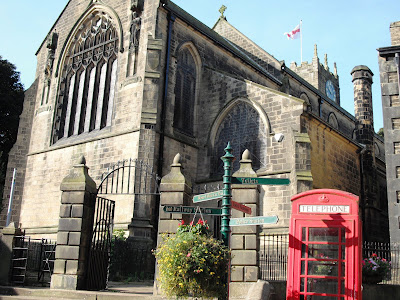 The Red Arrows have just flown over the top of Penistone Nature Park. 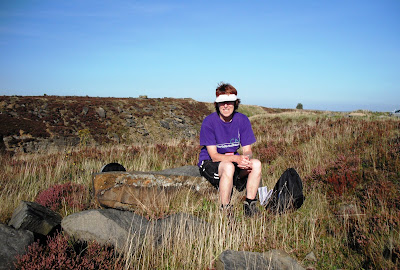 On the Sunday I went back to Saltaire and picked up a free directory of all the houses which were open to the public. It's a bit like the Open Gardens idea when people invite everyone to come and have a look round, only this is to come in and view what crafty things they have made, or pictures they have painted. It seemed very cheeky to step into people's front rooms and have a nose around, but they were all very friendly and keen to talk about their craft projects.

I had a look round the huge Mill built in 1851 by Sir Titus Salt, it stands near the the River Aire, hence the name Saltaire. He also built all the houses nearby for his workers, and the church, and nearby Roberts Park. The whole project took 25 years to build. The Mill now houses art galleries, shops, and restaurants, many of David Hockney's works are displayed there. I hadn't taken much notice of his creations before, but now I am well and truly hooked, the man is a genious. 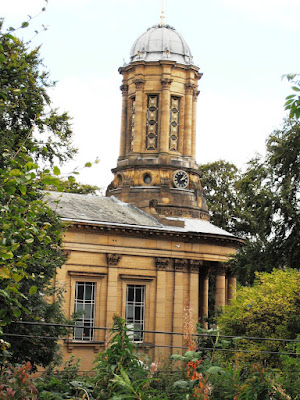 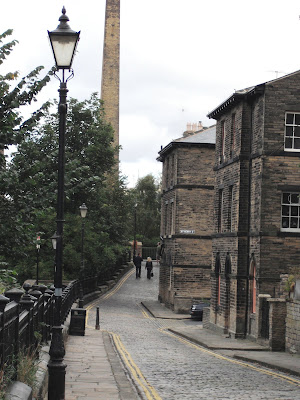 Later in the afternoon I had a walk to the Shipley Glen Tramway, but unfortunately it was closed, so I carried on further up onto Baildon Moor, I just love spectacular views. 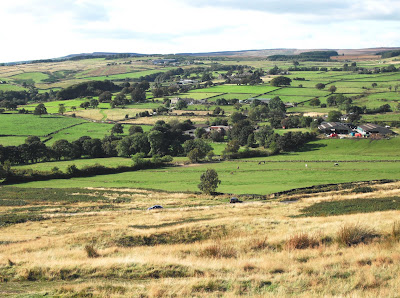 The following day, Monday I had a full day's walking by myself, as my walking friend had gone home. I set off up the footpath from the Parsonage Museum, and headed towards the Bronte Waterfalls. Someone had mentioned that it was only a stream tumbling over some rocks, but I was determined to see it for myself. An hour and a half later I was there, it was a beautiful setting, massive rocks all around, steep sides reaching up to the sky. I sat for a while listening to the water trickling by. 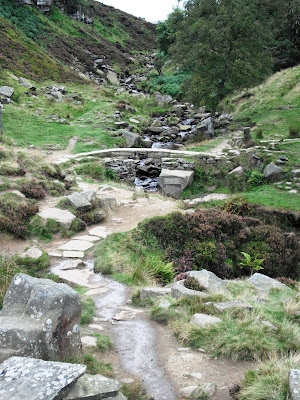 I carried on from here up to Top Withens, on the Penine Way, it's a farmhouse ruin on Haworth Moor thought to be one of the inspirations for Wuthering Heights. Blimey it was a long way, I seemed to be going forever. I was amazed to see a film crew when I got there, having their lunch in the ruin. 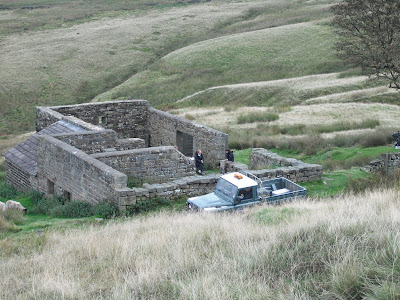 On the way back I walked around Ponden Reservoir. 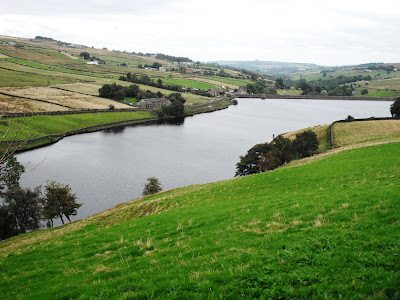 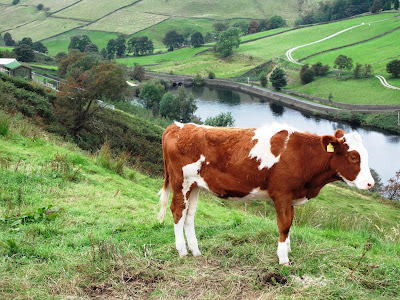 Just when I think I should be starting to come back I think of a detour I can make to see something else. I looked at the map and decided to go to Oakworth and take a look at the railway station where they filmed The Railway Children. 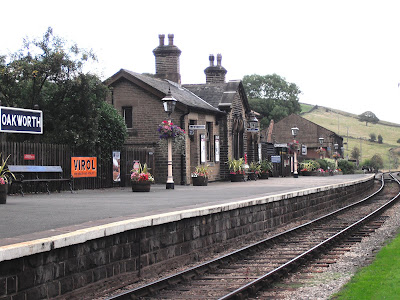 Oh boy, my feet are sore now, I must have walked about 13 miles, or possibly more, another mile and I can take these boots off. The sore feet only last a day or two though, can't wait to go out walking again.
Posted by Meanqueen at 10:11