The garden has looked lovely and clean these past few days, with a thick layer of snow covering up all the ugliness of the empty veg beds, and those where I have yet to pull up the last few dying plants. Today the sun is out and the ugliness is back.

The lawn is covered in a white sliced loaf of bread torn to shreds and offered as bird food, along with fat balls, rotting apples, and a scattering of bird seed. The frying pan/bird bath is now visible and even though it is filled with fresh water, our feathered friends are not in a hurry to hop into it.

As I followed Ben round the garden for his morning stroll I noticed that two of the raised beds have been used as a feline toilet, several little squiggly mounds are laid on the top. Despite my attempts at putting barriers over them, they have managed to squeeze under and between the branches I laid on top of the plastic trellis covering the surface. They must have given up trying to bury it, which I suppose is a good thing, because at least I can see it to scrape it off with a trowel, rather than sticking my hands into it in the spring when planting time comes around again. :-(

My defences need to be reinforced, I gathered up the plastic tubs, pots, and pieces of wood that were scattered around and placed them on any bare sections of compost which might be the next target. I lifted a piece of wood which was laid over the join between two of the beds, there is a gap of a few inches here, and underneath I found a prickly ball. Horace the hedgehog was asleep.

I quickly replaced the wood, not wanting to disturb him. I though hedgehogs buried themselves under piles of leaves and twigs, this one did not seem adequately covered. Not wanting the poor little mite to freeze to death, I got some plastic sheeting and made a tent over his hideaway. I do hope him and his friend survive and come back next spring. They came onto the lawn every night last summer because they knew there was a feast to be had, it was lovely to watch them. 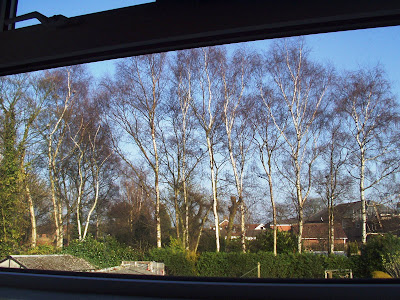 The tall silver birch trees in the next garden are looking like skeletons. At the moment they are still, but when the wind comes a thousand small twiglets rain down on my garden. These are home to several wood pigeons who seem to do all their courting around here. All my pottering in the garden takes place down the bottom in the veg patch, the rest is lawns. The borders are full of evergreen bushes, so these only need trimming once in a while. I love the seasons in the garden, going to sleep in the autumn, resting in the winter, new growth shooting through in spring, and glorious colour in the summer. How lucky we are.
Posted by Meanqueen at 14:09