Quick peek into my rock pool

A month or so ago I posted a picture of a stone I had covered in crochet, and added some beads for decoration, just to remind you here it is again. 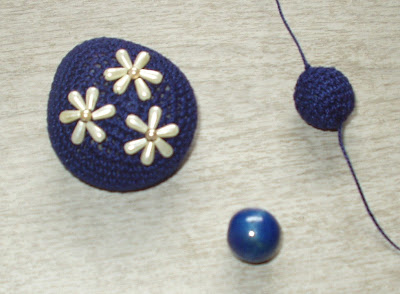 Now I have some more stones finished which are going to be part of a larger table decoration. It's taking a bit of time to complete because I have a picture in my mind as to what I want the finished piece to look like. I have to be happy with each part of it, design wise, and the construction has to be as good as I can make it.
I want to move a bit sideways with my creations, thinking further out of the box, using my imagination to make things more artistically appealing rather than having a practical use. I loved the tv programme, School of Saatchi, where six young people were given the task of creating pieces of art. Fascinating to see how different people's interpretation of art manifests itself.
Anyway, I thought I would let you have a sneak preview of my new creation. I have finished six of the stones. To keep the cost as close to nil as I can, I am using found, recycled, or rubbish items that would be thrown away. Here is one stone. 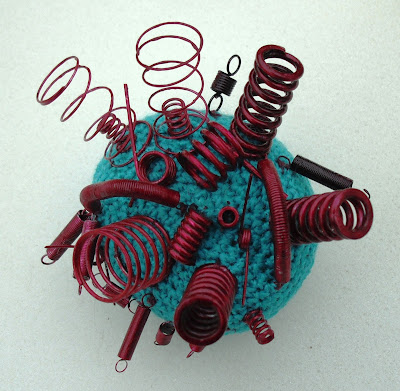 The springs are from a video recorder which I have taken apart. I have painted them with nail varnish, and stitched them onto the crochet covered stone. I rather like this one, the colours contrast nicely. The problem I had with the two long thin springs was the nail varnish chipped off when I bent them into an arc, so I had to repaint them once they were sewn on. Maybe I'll put a picture of another one on soon.
Posted by Meanqueen at 15:07