This is a post for Butterfly, or anybody else, about what you can do with cat food boxes. I made this coffee table some time ago and have been thinking of ways to finish it off. 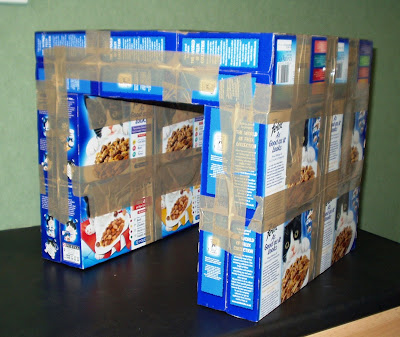 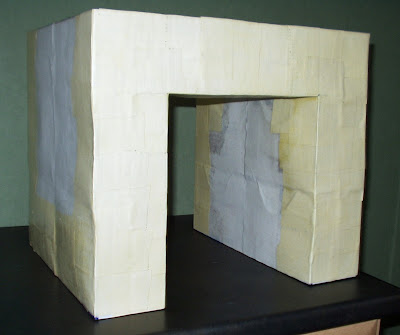 I have used fourteen boxes, a simple test design to see if it will work. The two sides are four boxes on each side, the top is six boxes. Make the sides first. You need to get inside, pierce small holes on the outside about one inch from the edge where two boxes meet. You also need to pierce another hole through the two boxes on the inside so you can thread a piece of string right the way through, and tie the ends in a tight knot on the outside. Trim off excess string and close the box lids. Practice with two boxes first.

When you have made the sides, make the top in the same way with six boxes. Then tie the three sections together. It's like a bridge but the middle two boxes will not fall in if you tie the string tightly. You can see on the first picture that I covered the joins with parcel tape to strengthen it. I had to remove this later because the papier mache would not stick to it.

I then covered the whole thing, except the bottom, with papier mache. I started with walpaper paste and newspaper, but it wasn't sticking very well. Also the wet was distorting the flat sides of the boxes, they were bowing inwards. I tried tearing up some large sheets of white paper and stuck these on, it worked a lot better than the newspaper. Any recycled A4 sheets would do, it's a better quality paper than newsprint. Then I had to build up the dips with extra paper to try and level the surface. I used some old CV's next because they were printed on strong paper.

Now the whole thing is covered in washable wallpaper. I put a coat of varnish on the top which has stuck alright, but it is difficult to get the edges straight and tidy. It is very sturdy.

I think there is no limit as to what furniture you could make with them if you have the space to work. Think of them like lego bricks, in fact you could use lego to play around with different designs, then copy it with the boxes. If you make anything big though you would have to think about it being very inflammable, it would be very dangerous if it was placed in a position where it might catch fire.

Email ThisBlogThis!Share to TwitterShare to FacebookShare to Pinterest
Labels: recycle