Mystery solved. The pregnant pussy cat has been claimed, it isn't female and it definately isn't pregnant, it's just a fat old boy who likes hiding in the coal shed. His name is Chester. Oh well, he had a good old feed while he was there. It's always difficult to know if a cat is genuinely lost, or if it's just used to roaming about but popping back home occasionally. I'm glad we didn't take him in, we could have been accused of cat napping.

Update on Mr Beasley. He seems happy at Sue's for the time being till we can find him a home he likes, and will hopefully stay there. He has a new friend called Lucifer and they are happy to share a pen. Sadly Lucifer is poorly, he has had a scan and is found to have tumours on his kidneys. He came to Sue when his elderly owner had to go into a care home. Now he will be on medication for as long as he is comfortable, but he will be going to stay with another friend Janet, (my cat sitter) and her nine cats, untill the end of his life. Poor Lucifer, but he will be well looked after.

Now I have got Ben dog here with me for two weeks, the old boy keeps plodding on. We strolled up to the smallholding this morning to get some eggs. As long as he can sniff about, and get his treats and cuddles from me he is happy. 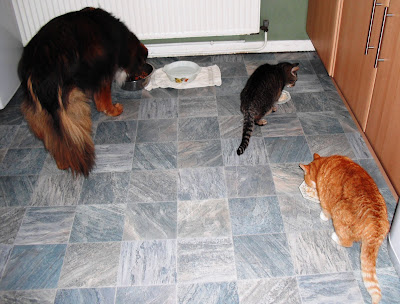