A walk from Grassington

It was a bit damp when I arrived at Grassington about lunch time on Monday. I have wanted to visit this attractive little Upper Wharfedale town for ages now, after seeing pictures of their famous Dickensian Festival, which is on three consecutive Saturdays in December. I will put the dates on my calendar and make an effort to get there this year.

I decided to park in a side street just over the river in Threshfield, my walk was going to take a few hours and the car park charges would have been quite expensive. Grassington lies on the 80 mile long distance footpath called the Dales Way, which goes from Ilkley to Bowness on Windermere, and I wanted to walk the stretch up to Buckden and back. I had a Bimble around the shops before I set off.

There were lots of quiet little narrow cobbled streets, with almost every house adorned with hanging baskets brimming over with masses of colourful flowers. This house had large pots of flowers all the way up the stone stairway. 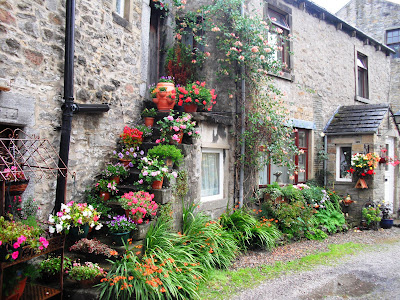 The main street does allow cars to drive up it, and it has limited parking, but it would be so much more enjoyable if they were banned altogether to allow visitors to imagine what it would have been like all those years ago. This eating house seemed quite popular. 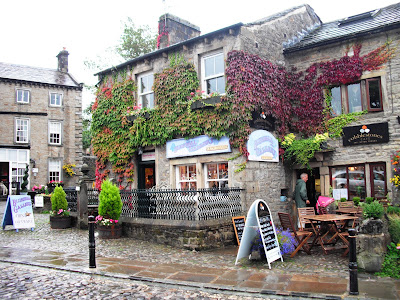 Everyone has gone to a lot of trouble to make it as attractive as they can, after all this is what brings in the tourists. 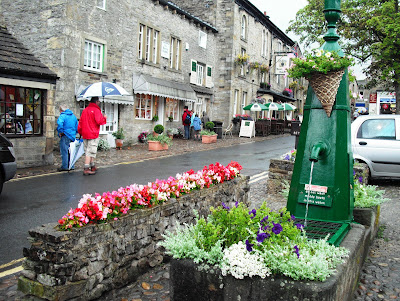 At the end of this cobbled street is a posh hotel. 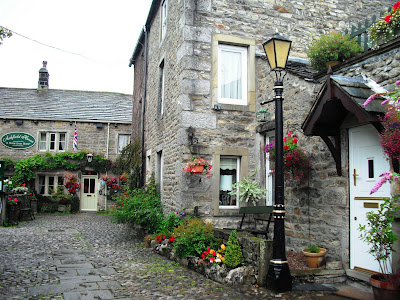 This shop sells all kinds of garden ornaments, mostly animals and birds carved from wood, and some are made from metal. 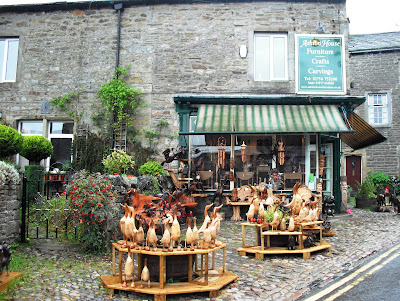 I can't spend hours wandering around shops, a quick look then I have to get out into the countryside, so off I went up the Dales Way. The rain had stopped and the sun was beginning to shine. It wasn't long before I had to stop and change my trousers and waterproofs for a pair of shorts.
Limestone pavements like these are everywhere. 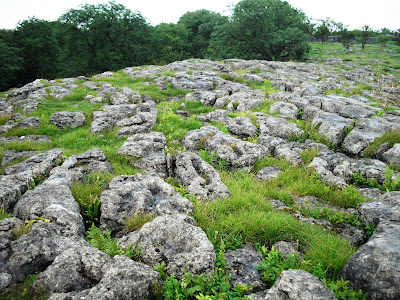 The deep vertical cracks and wide crevices between the stones shelter rare ferns and many different kinds of plants and grasses. 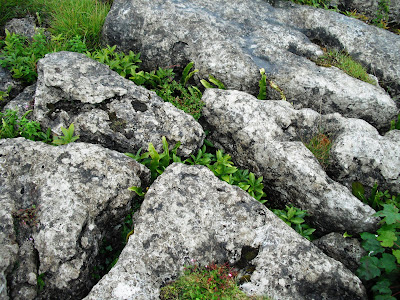 They are like giant stepping stones and very difficult to walk on, it's easy to lose your balance. You could easily twist your ankle if you misjudged your step and slipped down the cracks. 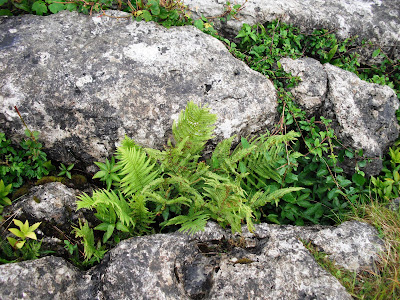 I reached the village of Buckden and checked out the Youth Hostel. Although I wasn't booked in here I wanted to see what it was like, as it has no car park and the building doubles up as a Post office as well. I might stay here in the future as I could use it as a base for walks further north. It's a pretty village, I found a bench and had a bite to eat.
Coming back I walked along the road for a while to get a bit of speed up. Time was getting on and I needed to get to the hostel at Malham. After a bit of a power walk, I left the road and joined a footpath which ran alongside the River Wharfe which took me back to my car. I met a youth who was walking his very lively young black labradoor. It came bounding towards me, eager to make friends. I spent a few minutes talking to the lad and fussing the dog who was called Bramble. When I got back into my car I thought, what is that horrible smell. Sniffing everything around me, oh heck, what has that dog been rolling around in!!!
I checked into the Hostel at 8pm, and made a quick meal in the members kitchen. There doesn't seem to be many people here tonight, except a couple of families with young children. Two small boys were playing their parents up something rotten, they wouldn't sit still and eat their dinner, they didn't have any control over them at all. I wanted to swipe the little monsters, but you can't do that any more.
Just checked the mileage, 13.13, not bad considering I didn't start till 1.30pm. Just think how far I can walk tomorrow if I start a lot earlier :o)