I'll catch up with that later

I've been skiving off a bit over the last couple of weeks, watching tele on the computer. I am so pleased that I haven't got a real tele, because it would be so easy to switch it on and sit in front of it the whole day. I would spend ages looking through the TV guide and working out my viewing timetable, and everything else would have to fit in around the box in the corner of the room. I know I would not be able to switch it off because I would want to get my money's worth from the licence fee. My mentality would tell me to watch everything because I have paid for it. 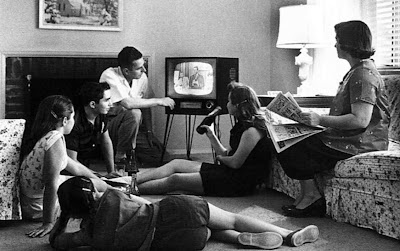 Most of the time I am pretty good on the willpower, I have loads most of the time. Like not switching on the heating willy nilly, not pigging out on cakes and biscuits, and not giving in to sales blurb. I can give myself a good talking to about the consequences if I should step out of line, and then feel good about myself because I have fought and won. Saying 'no' becomes easier the more you say it.

But with a tele, the temptation is always there to switch it on. It sit's there leering at you, winking and smiling, 'go on, you know you want to'. That is why I didn't want a central heating system that works, too easy to flick the switch. I am pleased to report that I am winning that battle, even though the government has fixed it for me. I am sitting here wrapped up in three teeshirts, two sweatshirts, two jog bottoms, jacket and scarf, and I haven't switched it on because it is warm enough without today.

But where tele's are concerned I am hopeless, so it's best if I don't have one. I can still watch Coronation Street, the only soap I have ever followed, even if it means catching up several days later. I have just watched a couple of programmes about Ronnie Corbet, a wonderfully funny man, and still funny even though he has lost his partner Ronnie Barker, and is now 80 years old. I like a bit of comedy, a good laugh does you the world of good, but I didn't laugh much at the new comedy with David Walliams and Matt Lucas, 'Come Fly With Me,' or something like that. A little bit tacky I thought.

For a little bit of light hearted entertainment I like Heartbeat, or Graham Norton if he has an interesting guest. Travel programmes are my favourite, especially if they are about places in the UK. Good for ideas for places to visit. I like being able to watch what I like, when I like, I'm in charge, and I like that. Now the tele programmes fit in with me.
Posted by Meanqueen at 18:08