Seems such a lot of photo's in one day, so I thought it best to split it into two posts, so here is Thursday part two. Here I am standing on Jacobs Ladder, looking down towards where I have come from. Beyond the trees you can see the track, following me up is a group of four walkers. 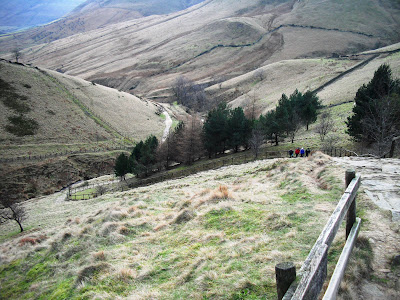 The crazy paving makes a lorra lorra steps to climb. 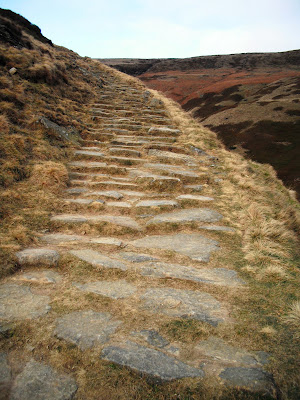 I am even higher here and you get a better idea of the distance. 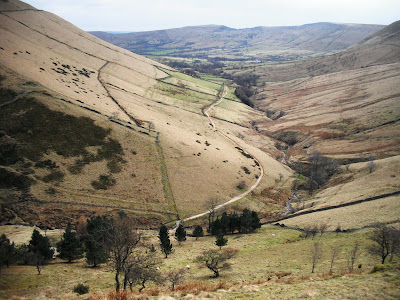 Now it is getting very cold, I let the other walkers pass me at this point. 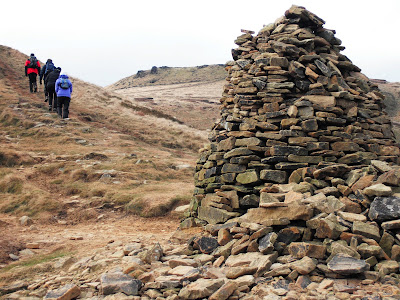 There are a lot of unusual shaped rocks on the ridge, but I am not familiar with their names, to me they are just odd shaped rocks. The more experienced walkers could probably tell you what these are called. My fingers were frozen so I could only take one photo before I had to put my gloves back on again. 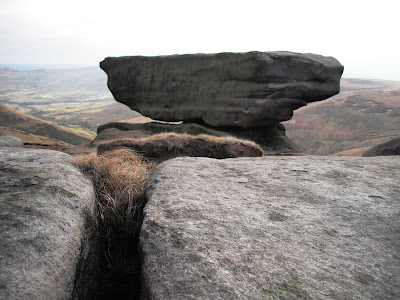 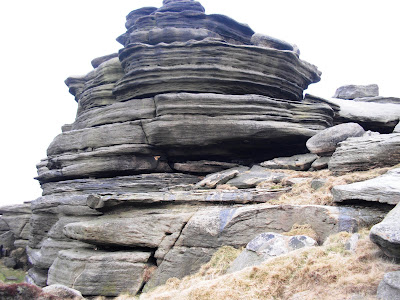 I was so very very cold, and it wasn't very pleasant. All my bodily fluids seemed to be exiting via my nose and my eyes. I couldn't see clearly through the tears, and I had to bung my nostrils up with screwed up bits of a paper hanky. I needed to get down quickly, so I excercised my right of freedom to roam, abandoned the map and went straight down.

The helicopter was still about, he must have done about fifty trips by now. 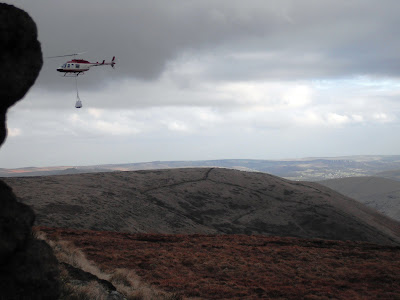 I joined Crowden Brook about half way down, and followed it to Upper Booth. 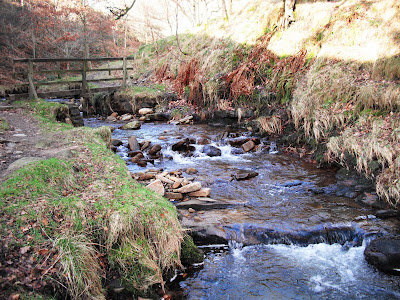 I decided I needed to stride out at a fast pace to get my body warmed up a bit, and realised I was heading for the field that the helicopter had been collecting the bags from. There he goes again. 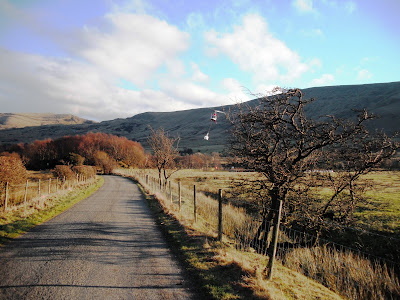 Just missed him, maybe I'll catch him when he comes back. 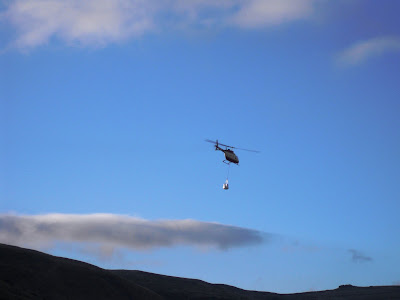 Yep, I found the field, a man from the National Trust was there overseeing the operation. What happens is that the helicopter lands while the man on the ground hooks up a bag to it. 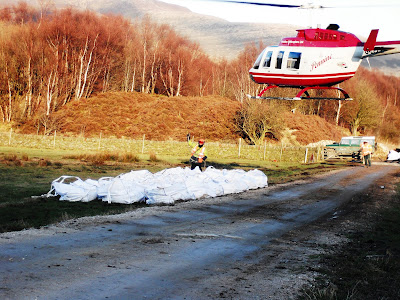 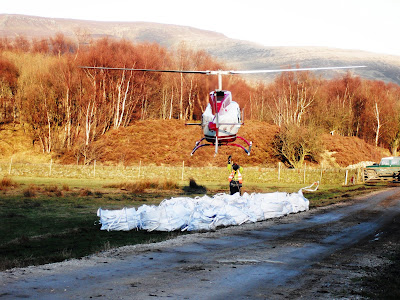 Then it slowly rises to take up the strain, 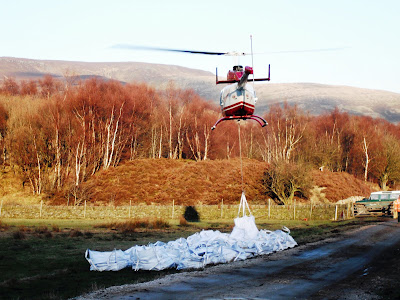 and up up and away it goes. 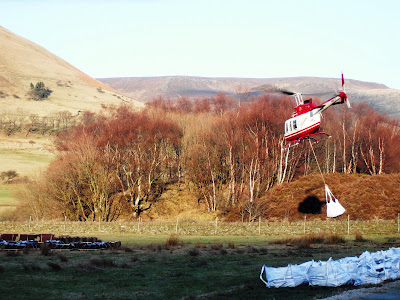 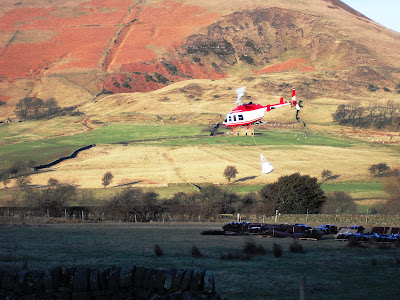 It takes less than five minutes each way. 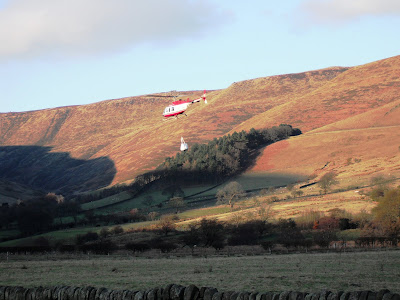 The helicopter went away to get refuelled so I asked the National Trust man what they were doing, I thought they were making up some new paths, but that wasn't the case. He said the rocks are put into the gullies to help stop errosion. The land has been over grazed with sheep, so any rain that falls rushes down the gullies taking the peat with it. They have put fences up to keep sheep off certain areas, the rocks will slow the water down, and they will plant more grasses and heather to bind the rocks together.
Apparently this is cost effective because they are taking tons of peat out of the water lower down at the treatment plant at Ladybower reservoir, and the helicopter is the quickest way to transport the stone.
Here he is back again, it didn't take him long to refuel. These photo's are a slightly different shade to the previous ones as the sun has now disappeared over the horizon. 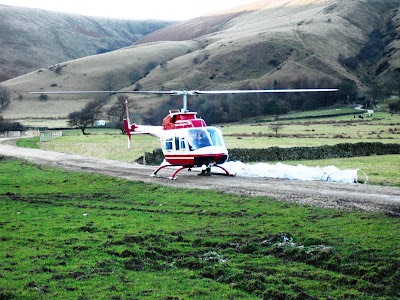 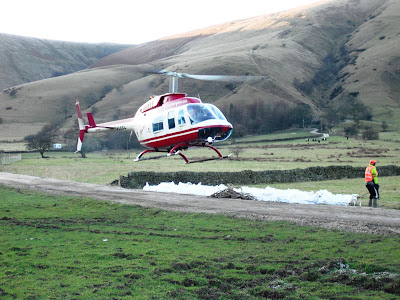 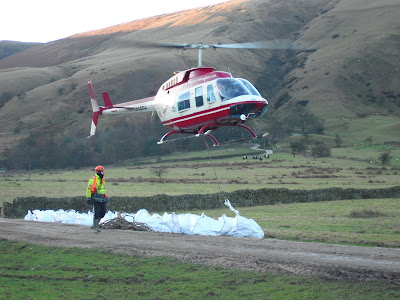 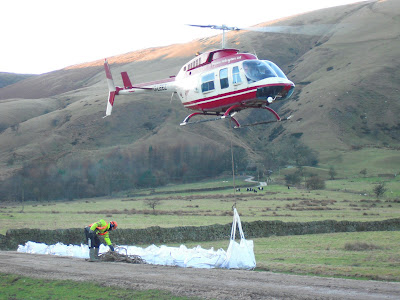 And he's ready for off. What an interesting day I've had, despite being half froze to death, and almost blown off the top of a mountain, ha ha. All I have to do now is walk back to the hostel. Wonder what's on the menu tonight? I know, can't be bothered to cook so it's a tin of mackeral fillets in tomato sauce, and a spud in the microwave ;o)
Posted by Meanqueen at 04:18