Oh no, not again!

Here we have four glasses of champagne. This afternoon I went to Janet and Paul's house, my pussy cat friends, and Sue my other pussy cat friend, came as well. I had a bottle of champagne, given to me about three years ago, and I thought it was about time to drink it. What better way than to share it with friends. 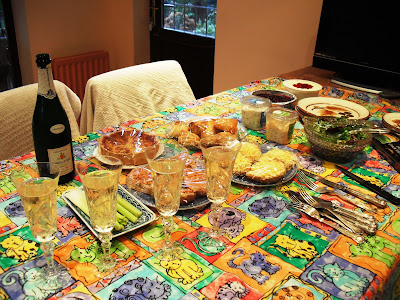 Janet very kindly laid on some tasty food for us, and I took along some posh ice cream for pudding. Do you like her table cloth, it's got colourfull cartoon cats all over it.

The champers was lovely, I could get a taste for it. I'm afraid I had rather a large helping of pudding. As well as the ice cream I had a piece of cheesecake and a scoop of trifle, drizzled with fresh cream, and topped with crushed chocolate and marshmallows.

I know what you are going to say, how silly to stuff my face again, after last week when too much stodge gave me belly ache. Well it serves me right if it happens again. I am just off out to try and walk it off before bed time. 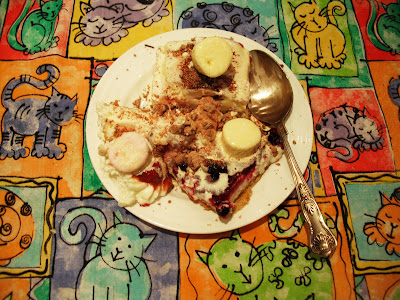 That's definately it now for over indulging. Never mind, it was only twice over the holiday period. Back to sensible eating from now on. I wont be needing any dinner tonight.
Posted by Meanqueen at 18:40

Email ThisBlogThis!Share to TwitterShare to FacebookShare to Pinterest
Labels: food