The Palladium, a national treasure

When I took this photo of the London Palladium in November, it was closed, and I was disappointed to see it looking quite shabby and neglected. 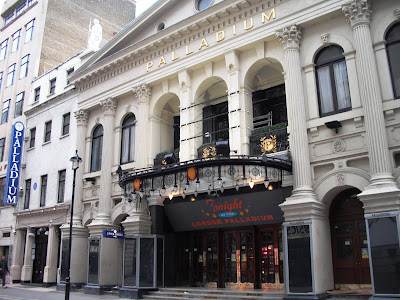 I have just beeen watching a very interesting programme on the history of the Palladium, here.....
www.bbc.co.uk/iplayer/episode/b00wyn7s/100_Years_of_the_Palladium/

It brought back a lot of memories as we used to watch Sunday Night at the London Palladium every week without fail. It was like a ritual, in homes all over the country, everyone sat down to watch it at 8 o clock.

Looking back at the artists who performed there brought it home to me just how talented and professional they were. There was no smut, no flashes of flesh, no half dressed females with bossoms spilling over, everything was inoffensive and respectable. How lovely it must have been to see a live variety show where the performers were actually good at their job, and didn't need to bolster their own ego by their misguided tackiness.

How things have moved on. For a variety show now, all we get is the hopeless wanabees queueing for hours in the street, they are whittled down to a handfull of manufactured clones, and even the winner sounds like a million and one other so called singers. Our up and coming talent these days have a much limited shelf life, unlike the stars of yesteryear. Susan Boyle was the exception, she has talent but didn't win, don't suppose she is bothered now, and Mary Byrne in the latest contest had the best voice, she didn't win either.

Anyway, it's nice to know that The Palladium is once again opening it's doors, in February. Andrew Lloyd Webber owns it, and his Really Usefull Company are putting on a new production of The Wizard of Oz. Long live our national treasure, the Palladium.
Posted by Meanqueen at 18:40