A tasty cheap meal, and virtually no cooking!

I had a look round the local car sales this afternoon, it was too cold to hang about for very long though. I thought it was strange that the gates at Gocar were locked, and there was no staff about. I made a few notes as I looked around, and got chatting to someone else who was also looking. He gave me a bit of usefull information, Gocar has gone into administration. Apparently they are going to try and sell it as a going concern, but if they don't maybe they will have a massive sale to empty the place. I think what normally happens is that they go to auction, but you never know, I will keep my ears to the ground to see what I can find out.

More people turned up to look, perhaps after a bargain. I spotted a security chappie inside the showroom, he was smiling as I smiled and gave him the thumbs up. He probably thinks it is amusing that people are around in the hope they might find a cheap car.

At 2.30pm I'd had enough, I was freezing cold, so I went to Tesco. It is eleven days since I last did a full shop and my fridge is quite bare. There was a few bargains to be had and the total came to £18.87. Some cheap bread for the freezer.

When I got home I made myself a very quick meal. 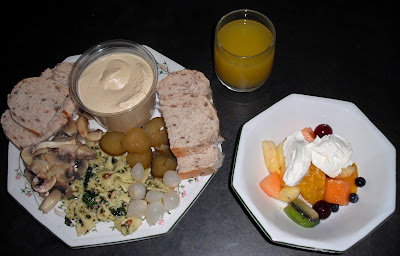 Market Value mushrooms are very cheap, £1 for a big punnet, I sliced three big ones up and cooked them in margarine, dash of oil, splash of lemon juice, and a shake of garlic granules. That was the only thing I cooked.
On the plate is half a carton of spinach and pine nut pasta, reduced from £2.10 to 52p. Pickled gherkin out of a big jar I bought for £1 two weeks ago, and a few silverskin pickled onions. A tub of houmous reduced from 85p to 21p, and three slices of sunflower wholegrain bloomer, reduced from £1.39 to 35p.
For afters I had a small carton of mixed fresh fruit reduced from £1.25 to 31p, topped with two spoons of creme fraiche D'isign, what ever that is. It was reduced from £1.28p to 28p, so it was worth a try, and it is yummy. So if you work that out I reckon it was a cheap and tasty meal, and plenty more left for tomorrow.
Posted by Meanqueen at 18:42