I'm just back from shopping, wanted to get this over and done with before the weekend crush starts. Tesco's B2GOF offer on pet food and breakfast cereals ends on Sunday, my friend Sue wanted to get stocked up on her cat food, so we went together in my car. Worth a little bit of petrol to save some money, and as she spent over £50 she got a voucher for 5p off fuel which she gave to me because she hasn't a car, so that's the petrol for this trip paid for :0)

Here is my stash. I have seperated it, the top pic is what I paid for, and the second pic is what I got free. Twelve boxes of 750grm bran flakes, 77p per box. You can keep your branded name fancy cereals, these are just as good, and along with the three bags of porridge oats I got last week that will keep me in breakfasts for about four or five months.

Six bags of cat litter £1.56 per bag. You don't need to pay any more for sweet smelling, soft and fluffy, woodchip, flushable, compostable stuff that cats pee and poo in. Just scoop the soiled stuff out regularly.

Whiskas dry, £4 per bag, my cats like this, waste of time buying the cheaper stuff they turn their nose up at it. I got a dozen tins of Whiskas, to give to Janet for looking after my cats while I am away. Strangely enough, buying them singly instead of six in a shrink wrap, is cheaper, even with the offer, daft init! 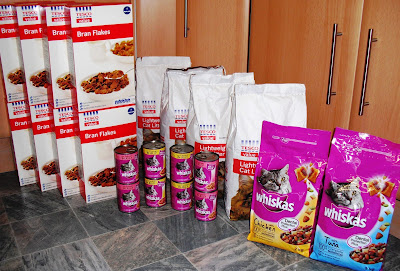 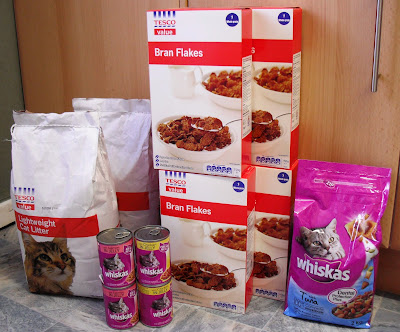 You might have noticed that I haven't got any Felix pouches for my cats, that's because, wait for it, the price per box has gone up, crafty eh! It's normally £3.40 something, it's now £3.79. I was so annoyed and didn't bother to work out if I would save a few pennies by buying it. I will stick with getting it at the market where it is £2.50 a box all the time.
I noticed that some of the pet food prices have increased, I wonder if they will drop back down again once this offer has finished. I buy Bakers Meaty Chunks for my doggy friends, usually at £2.10 or 20p a box, today they are £2.59, one heck of a price hike. The same with the 48 Felix pouches, usually £12 something, now £13.25. You've got to watch them.
I had a rummage in the reduced shelves and picked out a few battered tins. Spaghetti and beans. I don't eat too much of this but ok for a quick lunch. 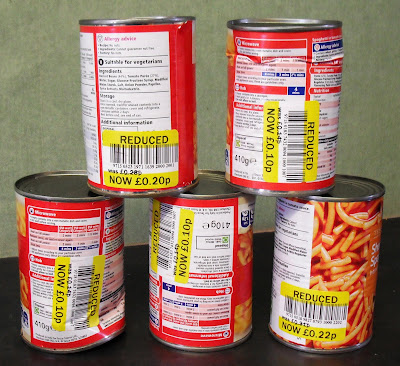 Then of course a few Value items, some to take with me next week. Mulitpack crisps (12) for 48p, and very nice crisps they are. Value onions were cheaper than loose, 2kg for £1.18. Ten sultana scones for 33p. Malt loaf for 28p. Tuna chunks four at 45p, mainly a treat for the cats, but I might get a taste, ha ha.
You have got to be very savvy when it comes to choosing cheese. I like tasty cheese but very rarely buy the expensive, flavoured fancy stuff. Tesco nearly always have offers on, and these are usually located in the chiller at the end of an aisle. They had two types of cheese from Lakeland, BOGOF £3.99. Fair enough sounds about right, but on closer inspection I saw they are not the usual 400grm, but now 370grm. So off I went to the cheese cabinet and found the Cathedral for the same price, 400 grm. So the brand they were pushing was not the better buy after all. On the shelf labels you need to look at the unit price in smaller print, below the cost price.
The four tins bottom right in the pic is something new to try. I usually buy mackeral fillets, but they have gone up in price to around 68p. When that happens I always look for a cheaper substitute which is just as good, so I got these flat tins of tuna slices in lime and pepper sauce. They were 49p each, so a saving of 19p a tin. 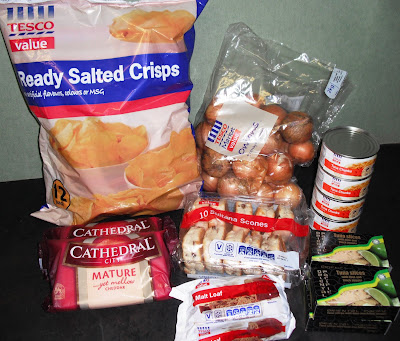 I got a few other things as well but didn't need much. Value honey for my coffee 67p. Flora Light was on offer £1.40 each, two for £2. Bananas, the loose ones were cheaper than the Value packs.
On the way home we called in at a small Cash and Carry open to the public. They buy in out of date stuff and have a market stall as well. Some of the items are only just out of date, you have to check the dates on everything you buy.
I got two packets of Ryvita for 50p. Four pots of rice for 50p, handy for my days out next week. A jar of Korma cooking sauce for 39p. Three boxes of Enchilada Kit for £1. Sue had one of mine for 33p as she didn't want three herself. 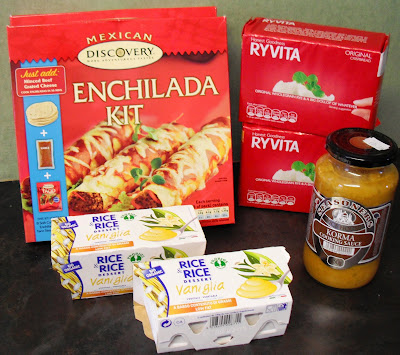 So there you have it, my foraging trip. I now count shopping as my job, it has taken the place of going out to do a real job of work. This job has flexible hours, I can do it at any time of the day or night. I can do it in short bursts, anything from ten minutes, up to a long shift of trawling round Tesco for three hours. I see it as time invested, not a chore, but a plan to win. I'm like a squirrel gathering nuts for my store. My cupboards are full now, I only need to get fresh veg for the next few months, maybe a carton of soya milk, maybe a loaf of bread. All is well in the kitchen.
Posted by Meanqueen at 15:39