This morning my body said, 'Go out for a walk, you need to walk', so I did. I dropped the bedding from the skip, at Jerry Greens, and went to Binbrook on the Lincolnshire Wolds, about thirty miles away. The weather was a bit overcast, but I was hopefull that it would brighten up. You can't hang around waiting for a good weather day, if you want to go out, just do it.

St Mary and St Gabriel's church, known locally as the Cathedral of the Wolds. The reason this church has two names is because there were two churches 100 yards apart. In the 1840's St Gabriels was just a ruin, and St Mary was in a poor state. The two parishes were amalgamated and a new church was built on the St Mary site. In 1869 it was consecrated. The church can seat 400, but I couldn't go inside today as it was locked. 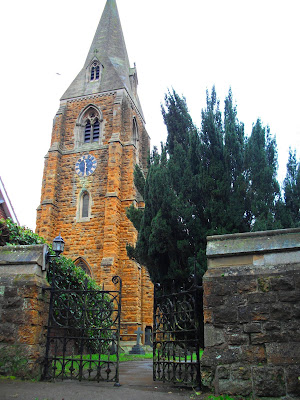 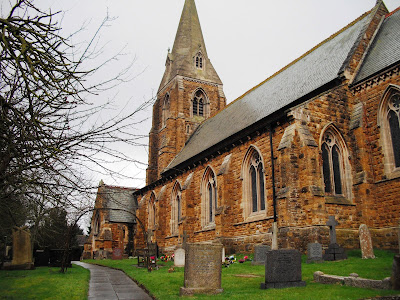 In 2005 Binbrook won the Best Kept Village award. Nearby is the former RAF Binbrook. There are several of these cast iron signs scattered around the village, mainly on the approach roads. 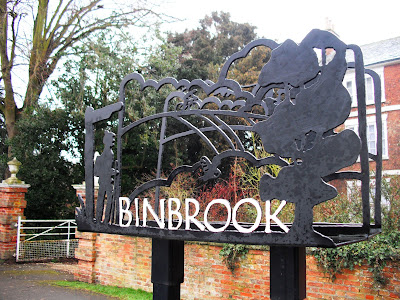 I had left it a bit too late to do a long walk today, so I thought two or three short walks would be better, depending on how the weather panned out. I set off on a track towards the sewerage works, then it ran alongside a stream for a while and passed by Binbrook Mill. The building looks as if it is derelict, the water gushed down the side of it and I suppose at some time there must have been a water wheel there to drive the mill. Behind it is a large family home. 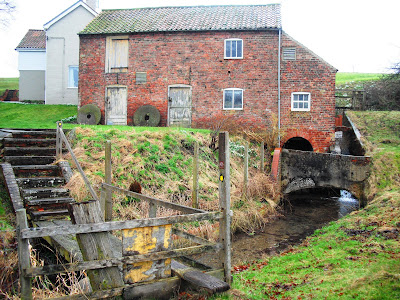 Another sign as I was coming back into the village. 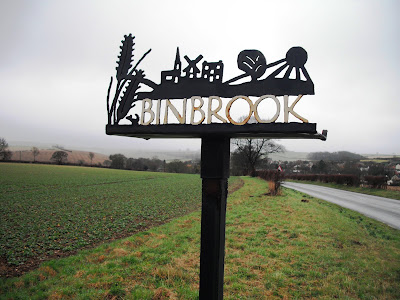 There was a bit of drizzly misty rain, but that had stopped as I sat on a bench in the village centre to eat my lunch.
Just past the school I took a public footpath, which ran along the driveway of a private house, and over a stile at the back into a grassy field. This is nice I thought, as I patted the nose of a white horse that wandered over to greet me. Not so nice when I went through the gate into the next field. It had been ploughed and the farmer had run his tractor across where the footpath should be. I squelched along the tyre tracks, gathering lumps of sticky mud on my boots as I went. If you look into the next field in the picture below, you can see the tyre tracks across there as well, yuk. 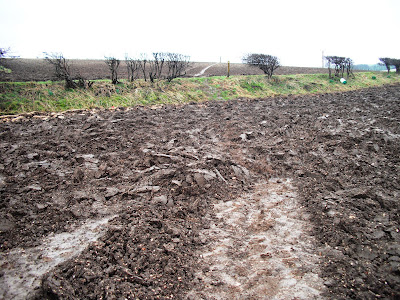 Eventually I left the mud behind. I don't think I will bother going into this field thank you very much, ha ha. It's straight on for me. 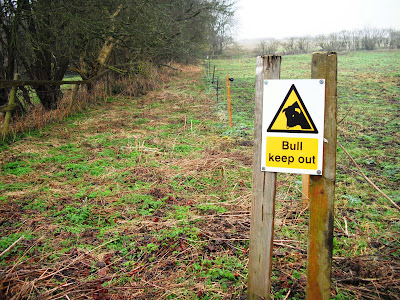 That's better, dead easy to follow that path. The weather was getting pretty grim now, heavier rain and wind blowing it sideways. I pulled the toggles tight on my hood to tighten it around my face, to keep my ears warm, could have done with some windscreen wipers on my specs though. 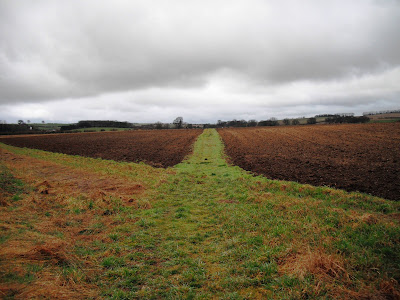 I came into Stainton le Vale alongside a stream and took this photo of the back of Manor Farm. They always have old wrecked machinery lying around farmyards. 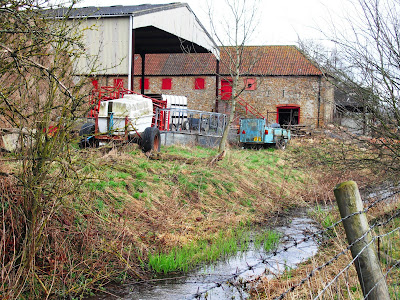 Quite a lot of villages have these tin sheds, this one looks like it was a village hall at some point, it has a portaloo next to it. 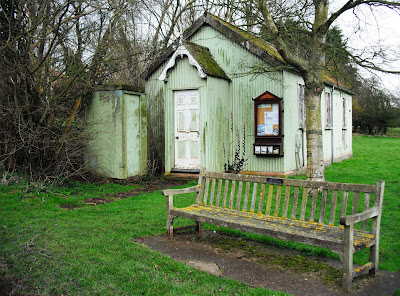 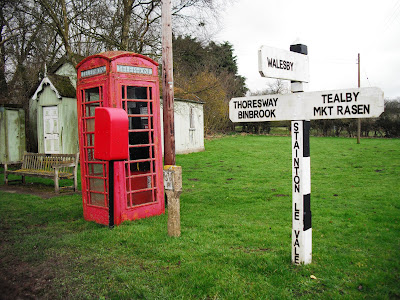 As I came back, along the road towards Orford Bridge, I saw that they had built some barriers with wire cage boxes full of rocks, to stop any stray cars falling off the edge of the road and into the stream which flowed underneath it. Some cheeky beggar had come along with wire cutters and opened the box up and stolen a lot of rocks. No doubt they have a very nice rock garden now. 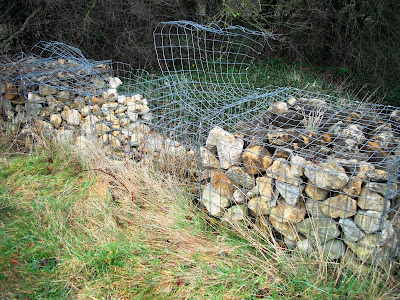 Here we are coming back into the village again, and another fancy sign. 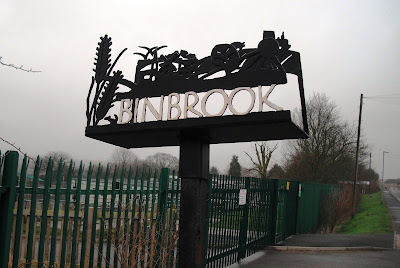 At 3.15pm I decided to call it a day. The weather hasn't got any better, and I wasn't enjoying it any more. Just checked it at 7.15 miles, a bit pathetic really, must do better next time.
Posted by Meanqueen at 21:15