No lying down on the job

Here I unveil my new artwork for the garden, cue fanfare. This is my own creation, it has been a work in progress in my spare room for the past fifteen years. I brought it with me from my previous house.

As I had difficulty getting it down the stairs in two pieces, I had to make some alterations with a stanley knife and a pair of pliers, while perched on the landing at the top of the stairs. To assist manouverability some surgery was required and so I had no alternative but to chop one piece in half.

Initially, after much struggling, I had thought that a few hefty blows with a sledge hammer might solve the problem, but all that did was to give me a sore hand and make me sweat a bit. It's hard work being an artist.

Jessica blind dog was sitting nonchalantly at the bottom of the stairs wondering what the heck was going on while I was shouting her to get out of the way. I managed to stop it from crashing down on her head as I hugged it close to my body, and inched my way down sliding it on it's side. It was a tight squeeze to get it out of the front door, with only two handles on each side, and the first piece being bigger than myself.

At last the task was completed, with only one scrape about six foot long, at head height, along the wallpaper, and several chips in the paint on the door frames. Never mind, it's not a posh house anyway.

So here is the said work, an installation in arty speak. I couldn't decide which angle to take the shots from, so I chose these three. A close up showing the detail in the craftmanship, and the precision in which I turned the two pieces into three. A composition shot showing how the three pieces relate to each other. And finally the work as a whole. Can you see how it enhances the look of the rather boring timber clad shed and the patches of weeds growing through the tarmac on the drive. I'm rather pleased that I have a red door, it's a perfect match for the pink fabric. 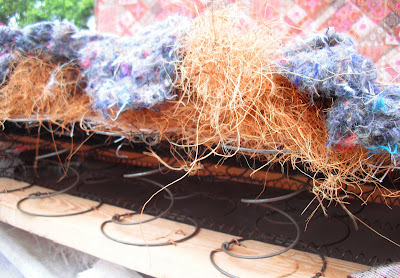 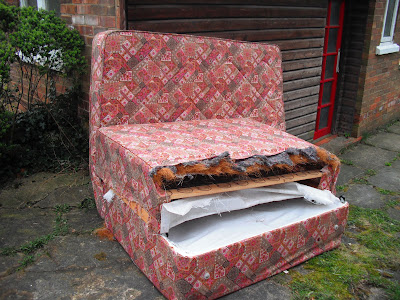 If you want to see it you'll have to be quick, the exhibition will close within the next ten days, and then the men from the council will come and take it away in a truck.
My poor Bugsy is very miffed, he wondered what was going on as I dismantled his hidey hole, and dumped it unceremoniousy outside. The bed used to be upright against this wall, he climbed up it to sleep undisturbed. I have tried to make him another safe place by putting some cushions on a big box coverered in a blanket, and putting it on a desk. It isn't quite so high, but I think he likes it. 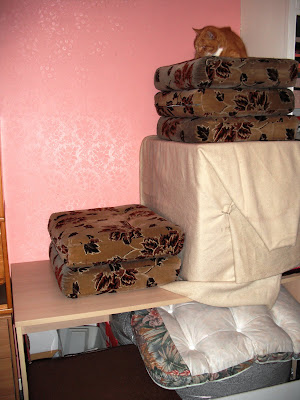 I didn't need a spare bed anyway, no one ever comes to stay, ha ha. It was in the way, and old and smelly, so it had to go.
Posted by Meanqueen at 19:02