After packing the tent away I made a sandwich for later. Peanut butter, some of the beans left over from last night, and salad leaves. A bit of a strange combination but I eat what's easy to make when I am out, and as I don't take a cool box I substitute peanut butter for low fat spread.

It was about and hour and 45 minutes to Kettlewell, and the closer I got the more excited I became. I have decided I love the Yorkshire Dales, it's one of my most favourite places to be. 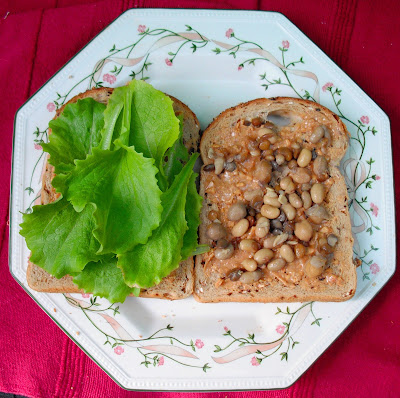 This map is not very clear, I couldn't fit the marked routes on the scanner so I photographed it. Perhaps it will enlarge if you click on it. If anyone is not sure where Kettlewell is, Skipton is on the A65 and due north is Rylestone, (Calendar Girls country), Grassington, and Kettlewell. It's in a deep valley and whichever way you walk you have to climb out of it. The pink line is the Sunday walk which was 12.45 miles, and yellow is Monday, 11.60 miles. 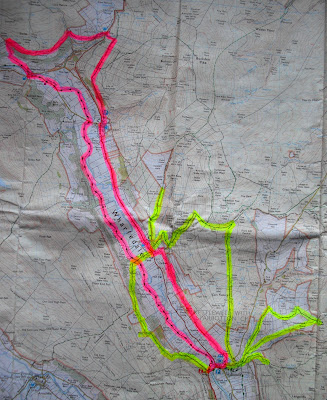 Lets start with a pic of the hostel. This is in the centre of the village, and doubles as a Post Office as well. The PO counter is also the hostel reception, and two ladies come in during the week to open up the Post Office.

On the ground floor is a large dining room, well equipped kitchen, and drying room. Upstairs is the lounge, bedrooms and showers. There is no TV or internet here. Nearby is the village store, and there are three pubs. 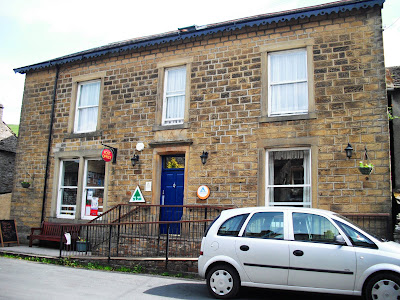 These cottages are opposite the hostel. 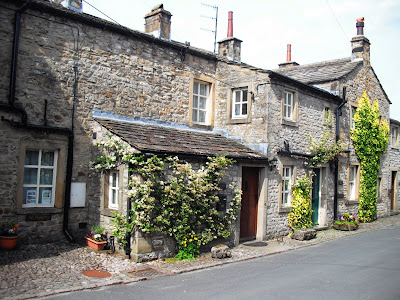 First port of call is St Marys Church which was built in 1883. The gardens are well looked after and tidy. 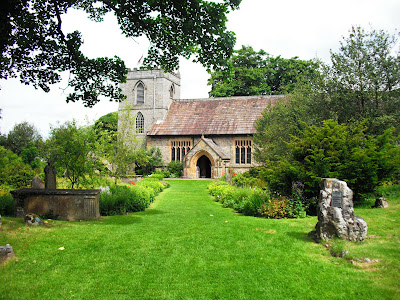 This is an interesting memorial, the names are all from one family. Setting the plaques onto a rock gives a natural look to the garden. Now that's interesting, I've just looked it up. Charles John Cutcliffe Hyne wrote The Lost Continent, The Story of Atlantis. He also wrote the Captain Kettle stories. 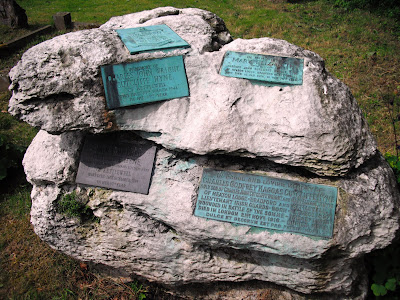 I decided to walk another section of the Dales Way, a 76 mile long distance footpath, from Ilkley to Lake Windermere. So this is where I start out, at the bridge over the River Wharfe. 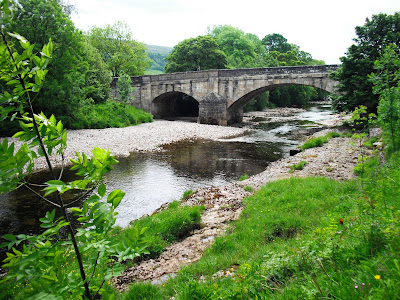 As it's a sunny sunday morning there are lots of people out enjoying themselves. The kids love playing in the river, the path follows the left hand side of it. 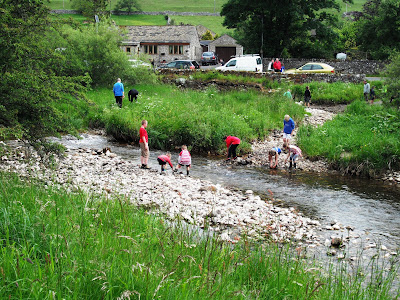 I went through this gate and the path here is well worn. All the tree roots are showing above ground. 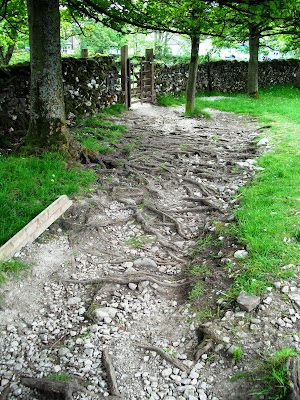 This is a view of the hill on my left. Several derelict stone farm buildings, and trees dotted about on the grassy slopes, with crumbly stone walls marking the field boundaries. 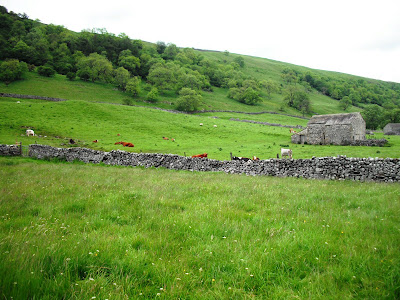 I came to this bridge which crosses the river to go to Starbotton. there are two very large squat pillars supporting the rickety bridge. 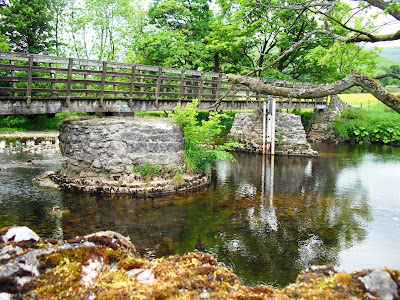 And a stile to get onto the bridge. I didn't cross it but carried on along the path alongside the river. 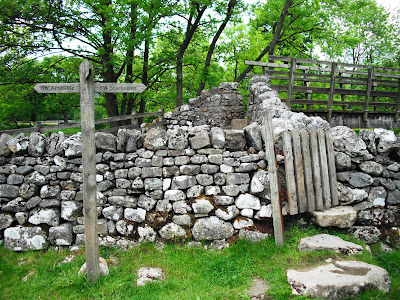 This is another bridge which I came across but the water has dried up completely. I don't know if that is because we haven't had any rain for ages or if the river has been diverted somewhere else. 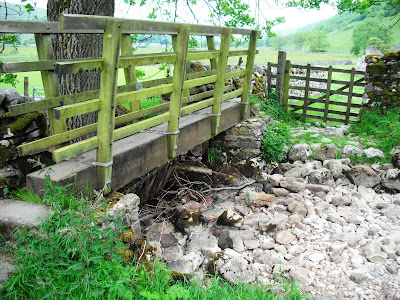 This building looks very solid. I wondered why some of the stone slabs have been laid to stick out sideways instead of in line with the rest of them. I'm sure there must be a logical reason but I can't think of one. 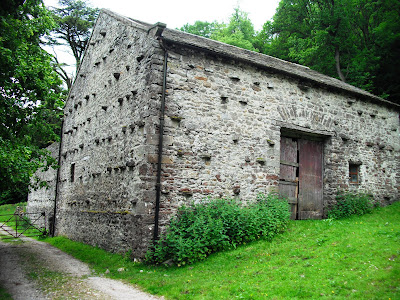 As I reached Buckden it started drizzling so I looked around for somewhere to sit for a bite to eat. A helpfull local chappie came to my aid and proudly showed me the shelter that the whole village had raised money to build. It was perfect, he said no one knew it was there, and if I could write about it on a blog or web site it might help spread the word. So I have. He also showed me to a barn which had been converted into a mini museum and information centre. It had old photographs and details of past history of the village. Very interesting. 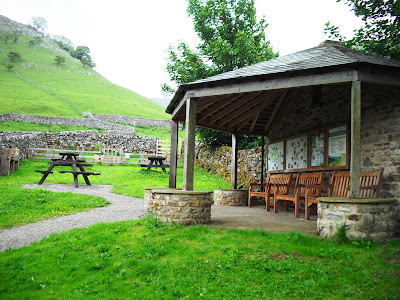 The rain had become heavier, but I decided to soldier on to Hubberholme. The church here is the resting place of the ashes of the writer and playwrite, J B Priestly. 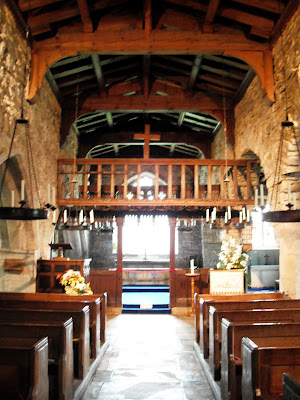 Of particular interest here are the pews carved by Robert Thompson, some of them have his famouse mouse trademark carved into them. It took me ages to find them. 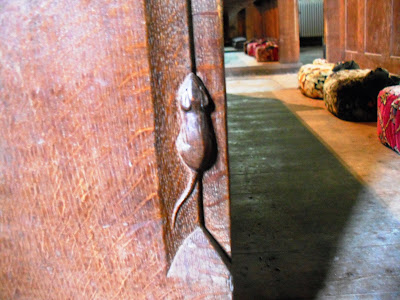 A bit further along the path and I came to Scar House where I turned right to come across, then right again to head back. The rain was now quite heavy and I could feel the wet coming through to my socks. The wind was quite strong as well. This is a typical Dales view. 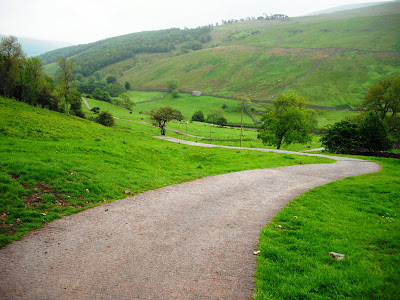 I think I will put an offer in for this des res, look it even comes with it's own swimming pool, ha ha. 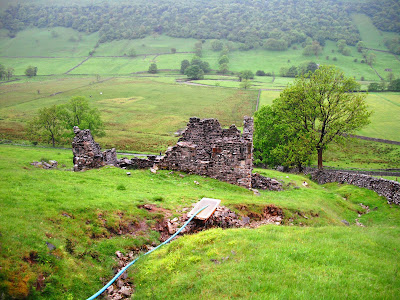 It really wasn't worth taking any more photo's. The rain was impairing visibility and I couldn't be bothered to get the camera out of my pocket while grappling with an umbrella which insisted on turning itself inside out every time I was off my guard.

I checked into the hostel at about 6.30pm to find I was sharing a room with another female of similar age. She was on day 12 of a backpacking holiday, by herself. She was carrying the full kit, tent, camping gear the lot, and she wasn't any bigger than me. She had been camping every night, but had descided to use the hostel to give herself a break. Later when we got chatting she told me she has a husband and family, and has completed several long distance paths. Amazing. Also staying was 26 guys, they were members of a cycling club. As I said before, you meet such a lot of interesting people. Dinner tonight was cous cous, sweetcorn, and tuna fish. More photo's tomorrow.
Posted by Meanqueen at 17:51