In my previous life

I hope you don't mind me indulging in a bit of nostalgia here, but Maa has posted some photo's of trucks on her blog, and I've come over all sentimental like. So I've dug a few pics out of my hundreds, and scanned them.

My trucks were the love of my life. I say 'my trucks', I never owned them but treated them as if they were my own. Polished them, looked after them, and fell in love with them. If it was a contest between which I liked best, men or trucks, the trucks always won. So here we go...

I loved my job at Leicester Heavy Haulage. Every load was different and you never knew what you were getting on your trailer untill you arrived at the collection point. Here we have semi step frame trailers stretched out to 50feet. Having a break in a layby, waiting for an escort. 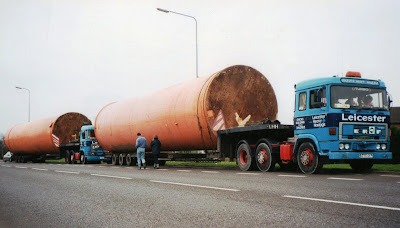 Goodness knows what this was, again a step frame trailer to keep the height down. Notice my name in the windscreen and the Lady Truckers Club sunstrip. 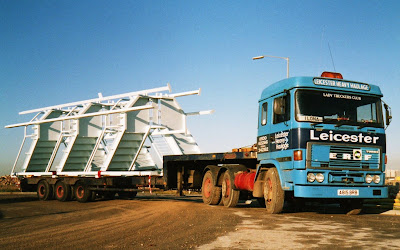 This monster thing was a water filtration plant. There was two loads and we had two mates riding with us. We picked them up in Gloucester and took them to Goole Docks where they went on a boat, or maybe it was a ship, ha ha. Quite an eventfull journey, I broke down in the Gloucestershire countryside. A terrific bang came from the back end, I though a tyre had blown but it was an air bag which had disintegrated.
We were under police escort and the cops took the other truck further on, I had to wait for assistance. My firm sent a man in a van. I broke down at 4pm, eventually we were ready to move at midnight, so I rang to ask the police to come back for me. They said they would come in the morning. I said they have to come now, I am blocking the road, I have all my hazard warning lights on plus the orange beacon on the roof, and I want to go to bed. They came out to me and took me to a parking place, I got to bed at 1am.

Also during the journey we were parked on the Leeds Ring Road, changing escorts, when a woman drove her car into my load. It ripped the whole side of her car out, but just scratched the paintwork on the massive iron girder on the bottom. I felt a bit sorry for her. 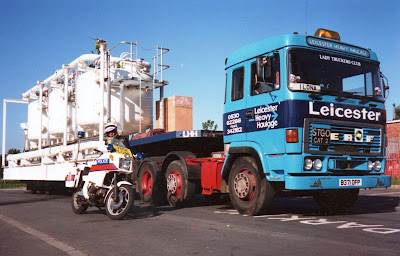 This is a low loader trailer with a brand new All Wheel Drive tipper truck on the back. I picked it up at the NEC after the motor show, and took it back to the factory at Dunstable where it was made. With a low loader you have a donkey engine at the front. After starting it up you lower the bed to the ground, knock a few pins out with a big hammer, and the neck splits in two. Then you build up a ramp with timbers and you can drive your load onto the back. Connect it all together again and bingo, ready to go. After chaining down of course, don't want the load to fall off the back, ha ha. 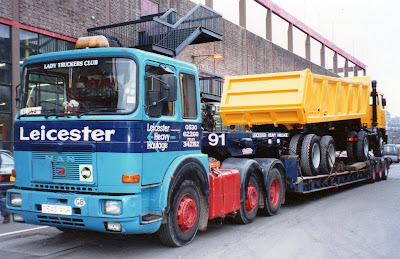 Sometimes I went to a job without a trailer, because the load was the trailer. I picked up this machine in a quarry. It had been there for some time so they usually send a gang in first to dig it out, clean it up, put the axle and wheels on, and make it fit for the road. I come along and hitch up to it and put my light board on the back.
You can see that it is very low on the ground, only a few inches clearance. To get out of the quarry I had to go over a hump back bridge, tricky. I ran one side up onto the pavement, and built a ramp up with railway sleepers for the other side. Just made it over without scraping the bottom on the bridge. 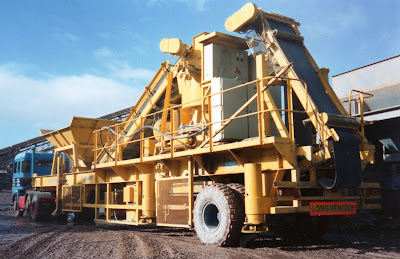 Intercity railway carriages. There were eight of these coming into Felixstowe Docks, every two months, from Italy. We had to have eight vehicles parked by the side of the boat, trailers stretched out to 60feet, and the crane lifted them out of the hold. We took them to Metro Cammel in Birmingham to be completed. They were just empty shells, so quite light. Overall length 95feet. 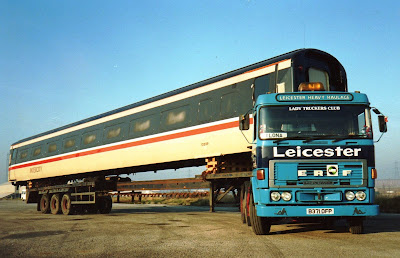 These concrete panels were being lifted off the trailer with a tower crane, and bolted straight onto the side of the building while they were hanging. We transported them from Nottingham to the centre of London, just off Fleet Street. The orange frames stay on the trailer so we couldn't pick up return loads with these. 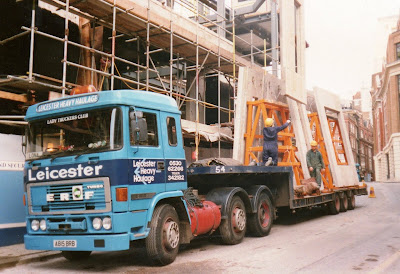 Can't remember much about these, but we used to transport a lot of second hand tanks and vessels. Somewhere in Norfolk possibly. 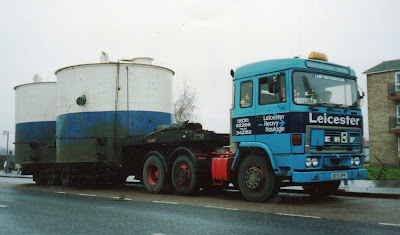 On my days off I used to play with trucks as well. I was friends with the driver of this truck and he told me of this load he was transporting. It sounded exciting so I went out to meet him on his journey, and my friend Polly came along. It was a huge push and pull job, the company is Abnormal Load Engineering (A.L.E) It was my ambition to work my way up to drive vehicles of this size. Alas it didn't happen because the men love their trucks that much no one ever leaves. 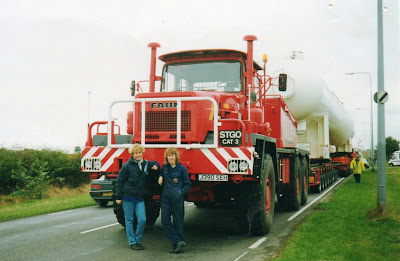 Here's one make of truck that Maa might recognise, a Western Star. My friend Geoff Byford owned this truck, he named it Lady Louise after his daughter. Sadly his daughter died at a very young age in Great Ormond Street Hospital, so Geoff had posters printed and sold them at Truck Shows and donated all the money to the hospital. I went to the Savoy Hotel in Lady Louise, for the Women of the Year Luncheon. This beautiful truck won all the top prizes at the shows for Best Custom Truck. 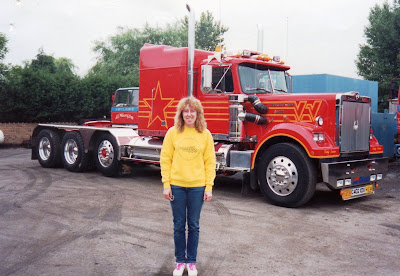 What wonderful memories I have. I hope you have enjoyed my trip down Memory Lane.
Posted by Meanqueen at 17:54