Two into one will go

Here is something you didn't know about me.........I love drag queens :o) I am fascinated by how men can become someone else by putting on some slap and wearing a frock. I love the trickery, the showyness of it, and the fact that one person can have two different personalities. I love watching the transformation from butch rugged male into feminine pretty female.

Lilly Savage was my favourite, with Dame Edna a close second. They were and are so entertaining. Mind you Paul o'Grady is great as is Sir Les Patterson, the overweight spitting Aussie, another of Barry Humphries characters.

A few years ago I saw a Ladyboys show at Manchester, and I loved it. Not tacky, but very polished, and very funny, some of those men make very pretty women.

There was something in the press not so long ago where an up and coming top model who wears female fashions in in fact a male. He is outstandingly beautifull. This seems to be a whole new trend amongst the modelling fraternity now. Good for them I say, embrace your differentness.

This is a pic of my three trucking buddies from the eighties. They did a comedy and musical act called The Heathrow Flyers. So funny, a bit of a micky taker. Not very feminine I admit, but they did a lot of gigs for charity. 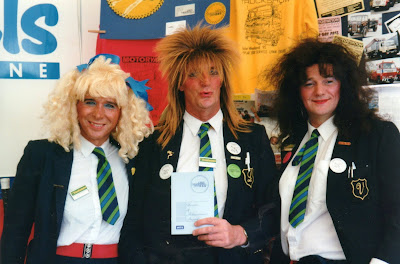 I have just watched a lovely programme on the iplayer, about 16 year old Jamie from up north, who wants to be a drag artist. It brought tears to my eyes, what a lovely lad, all he wanted was to be himself. I wont go into detail in case you want to watch it, but it highlights the differences in people, that we are not all the same. He got a chance to appear in a drag show, his mentor was Betty Legs Diamond, who I have seen at Funny Girls in Blackpool. If you want a good night out, Funny Girls is a fabulous place, the show is top class entertainment.

This is a beautiful film, very well made, and very sensitively done.
http://www.bbc.co.uk/iplayer/episode/b012p4kc/jamie_drag_queen_at_16/
Posted by Meanqueen at 13:51