I needed some kind of wrapping to post the bag to Eileen, which she won in the raffle last week, and looked through my small pile of used padded and jiffy bags. Occasionally someone sends me something in the post, and I try and unwrap it without damaging the bag too much, then I can use it again. I didn't want to fold Eileens bag, but send it flat so it arrives in good condition. Luckily I had one just the right size.

I try not to accumulate too much clutter, but I find it hard to throw things away which might come in usefull one day. This little pile doesn't take up too much room in a cupboard in my office. 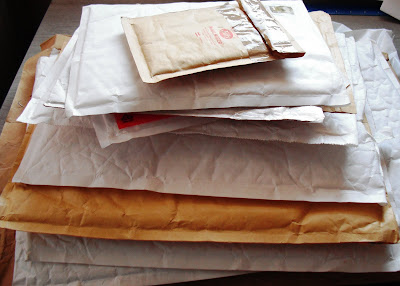 I wondered how long you should keep potentially usefull things, before you decide you no longer have a use for them. In this case, the bag I have used has a postmark dated March 1998, so 13 years and 7 months later I have found a use for it. Maybe Eileen will also open it carefully and re use it at a later date. It could be the most travelled padded bag ever. 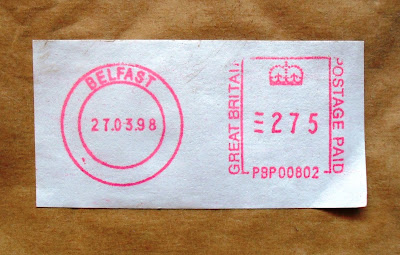 Here is another one, not quite so old, January 2006. So how long do you keep something in case it might come in usefull? 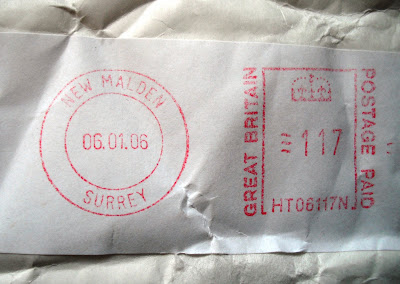 I took Henry a walk to the new cemetery again today, to see what his reaction would be. He remembered it from yesterday, and went into search mode again. Sniffing through the undergrowth, and looking all around him. This time he didn't put his tail down though, and it only lasted a few minutes before he gave up and decided there was nothing to find. Maybe the spirit had moved on.

We called in to see Julie, and Jessica blind dog. Julie had a bone, which they both took great interest in, so to make it fair and not favour one more than the other, she took it to the garage and sawed it in half. Here they are both enjoying it out on the lawn, while we had a cup of coffee. 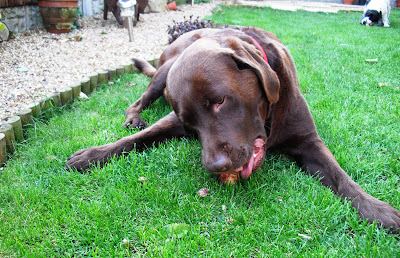 Henry absolutely loves Jessie, he gets so excited to see her. He has got more friends here than he has in his own village. 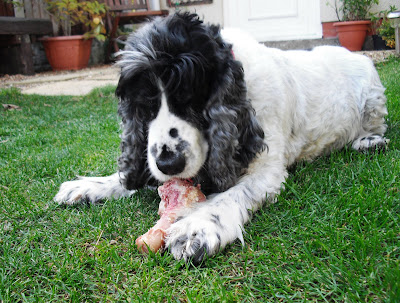