Lots and lots of cats

The party was excellent last night, the room was packed, and nearly everyone wore fancy dress. It looked like a lot of them had hired their costumes. Me and Julie made our own up from whatever we had lying around.

Julie had a pair of crutches in her garage so she covered her lower leg in bandages. With blood on her head and face, she limped her way into the room. I am a painter and decorator. I wore my old overalls, rigger boots, hard hat, and gloves, and took my step ladder and a can of paint and some brushes. The story was that Julie was up the ladder and she fell off because I wasn't holding it. Everybody laughed as we made our entrance. I think we should start our own business, Bob and Bodgit the builders. 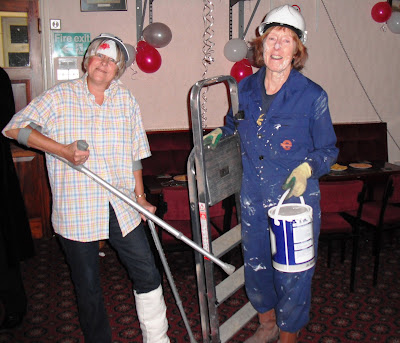 The entertainment was two females singers and one male, seperately not together. I had a bop. Here are our hosts. 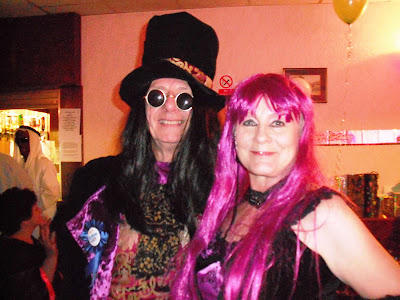 It was a cracking party, but, the food was not good, oh dear. Large trays full of foreign type nibbly food, were brought out, the sort you buy frozen in boxes. Spring rolls and onion barjees, and other unidentifiable objects. These were distributed on all the tables. I asked if anything was meat free, and the woman shrugged her shoulders and said, 'I don't know, it's Chinese and Indian'. I picked up an onion thing and tried it. Spicy hot but stone cold, everything was cold, it was horrible. Then Julie identified something that didn't have meat in it so I tried one. It was like greasy cold fried bread. Yuk, I didn't need a doggy bag. Hardly any of the food was eaten. Apart from that it was a good party.
Janet and me set off at 8am this morning for Doncaster Dome, for the cat show. We set our stall up on the balcony overlooking the main hall. Here the owners are arriving and installing their cats in the pens. 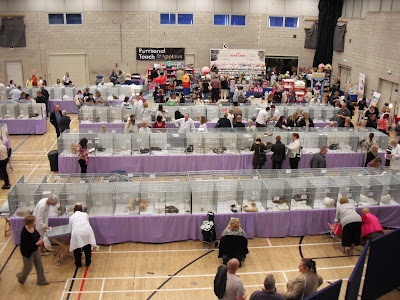 This is our stall, Janet is a bit shy today. She is watching everyone down below. 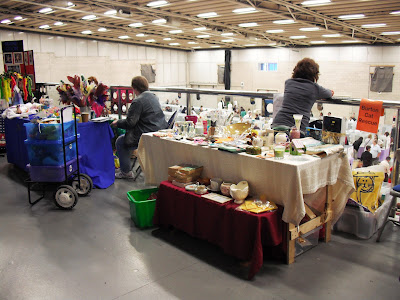 The trade stands are outside of the main hall, in the entrance lobby. These are open the whole time, whereas the hall is closed from 10am to 12.30 for judging. 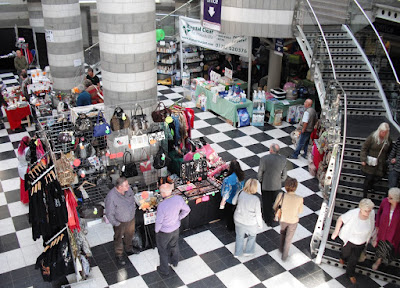 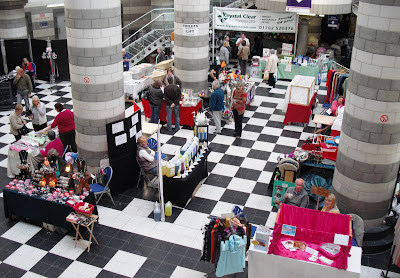 We both had plenty of time to walk round, I took a few snaps of the cats. 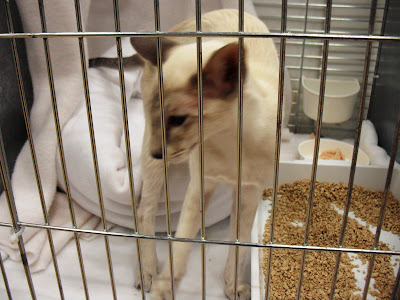 Cats of every description and colour. 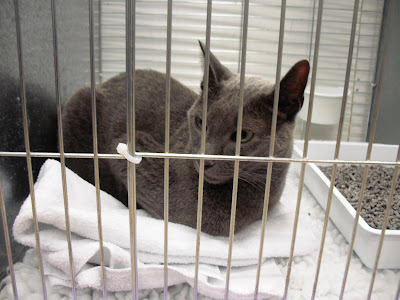 This one has a posh decorated pen, I think it must be a champion. It was the only one with a pen like this. 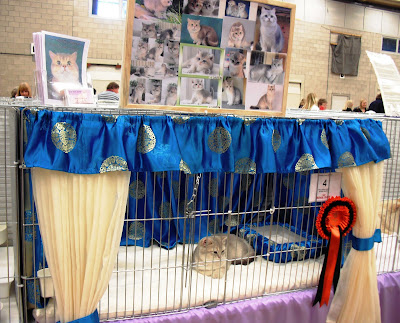 Look at this cutie, he has decided he wants to lie underneath his litter tray, ha ha. I say 'he', but I don't know whether it's male or female. 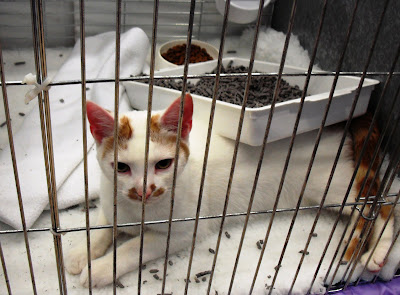 The proud owner of the beautiful Maine Coon opend the cage door for me so I could get a better picture. Gorgeous pussy cat. 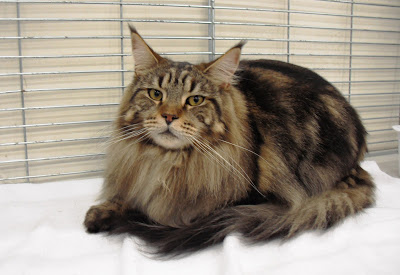 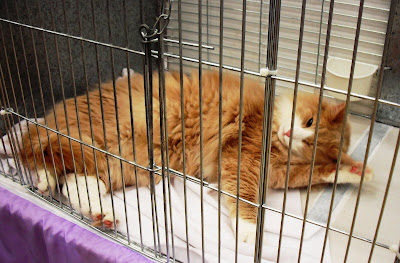 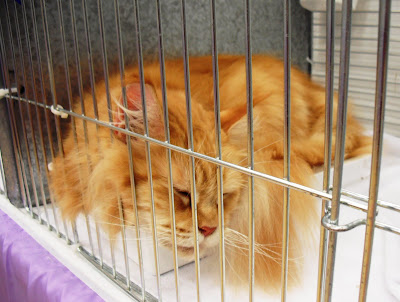 These two like playing with their rosettes. Yum, red ribbon flavour. 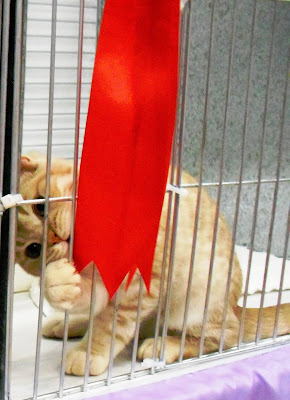 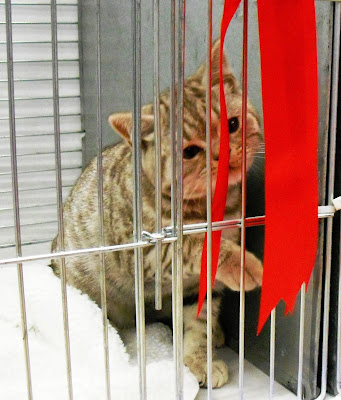 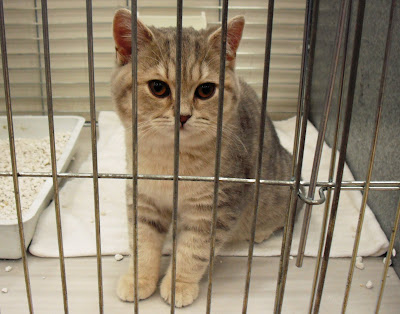 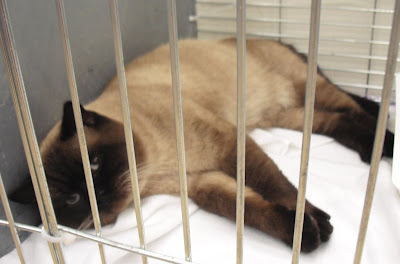 Now the judging is over and people are flocking back into the hall again to see if they have won. Pleanty of rosettes on the cages. 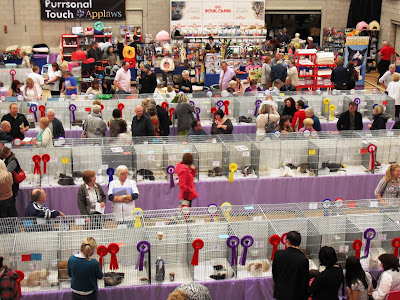 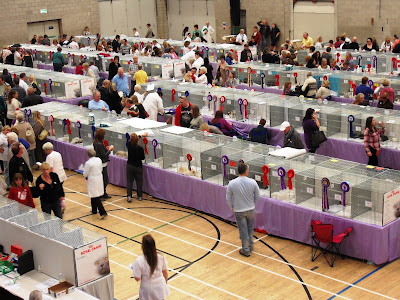 Now they have drawn the raffle, and the Supreme Champion of the show is decided. 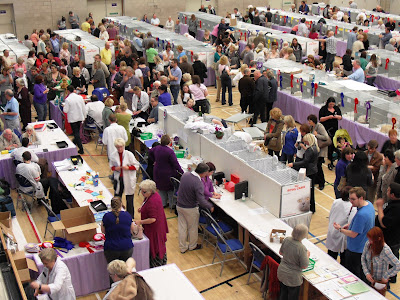 Our sales were not brilliant, but they have paid for four heat pads for our cats beds. They are like a round stone disc covered in fur fabric, which you heat in the microwave. They stay warm for up to 12 hours, you put them underneath the bedding, and it keeps the cats snuggly warm in the winter. I was able to get a good deal from Roy of Crystal Clear Pet Products. Thanks Roy. www.crystalclearpets.com

It was an enjoyable day out for us, I had a good natter with some of the stall holders who I had know previously, and Janet had a good mooch around the cats.
I'm off downstairs now to play with the kitties before bed time. Catch you tomorrow.
Posted by Meanqueen at 19:25