Twas an even more glorious morning on the third day of my mini frugal break, I was so looking forward to it. A fellow hosteller told me of a route that gave particularly nice views with easy walking, which he had done the day before. He said it was well way marked, that will do me. I took his advice and set off northwards. Very soon I was leaving the tarmac lane and hopping over a stile into a field.

There was a couple of miles or so with views like this. Absolutely fabulous. 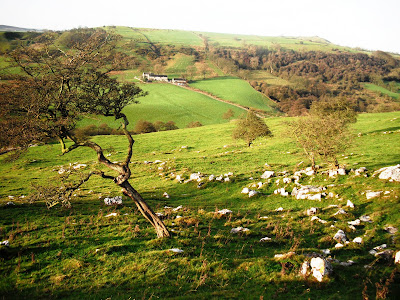 I came to a cross roads and took a left turn. Thank you whoever for putting a lovely new sign post there for me. 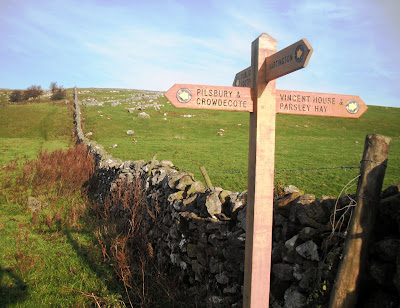 These little marker posts kept me on the right track. 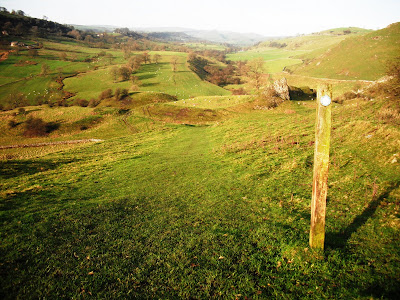 Oooh look, I came across a castle. 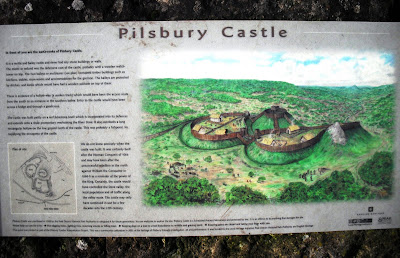 And here is the castle. Not much left. 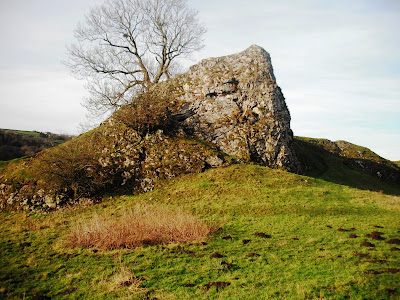 I climbed to the top to admire the views. 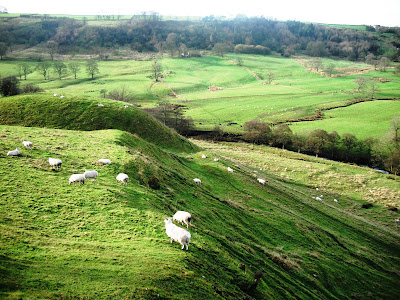 You can see the path down there which I am going to take. 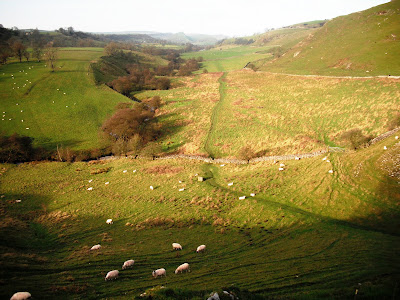 A bit further on I joined a farm track which came out on the road at Crowdicote. A typical Peak District pub, the Pack Horse Inn. 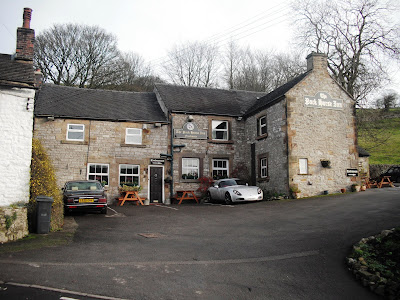 And some attractive cottages next door. It's a very small village, I was surprised to even see a pub. 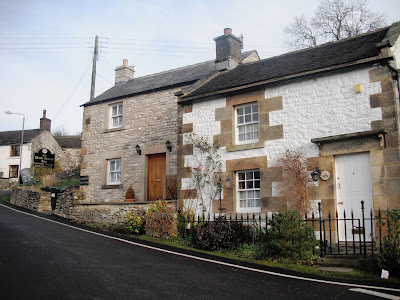 The next stop was Longnor, quite a large village with several eating places. There is a craft centre with a coffee shop, but it was difficult to take a good photo of it due to all the parked cars at the front. Shame really, it was an interesting building, but if I can't get the right shot I wont bother. This pub across the road was uncluttered though. The Cheshire Cheese looks very inviting. I can just imagine the blazing log fire inside. I sat on a bench and ate my sandwiches. Not their bench I hasten to add. 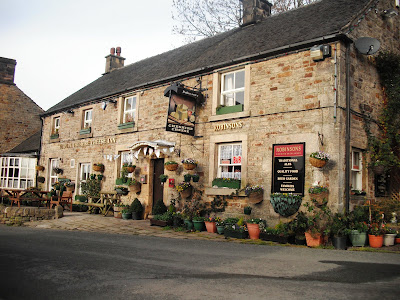 Off again across the fields. This photo makes it look more gloomy than it actually was because I have the hazey sun behind me. A few clouds about but still no rain. 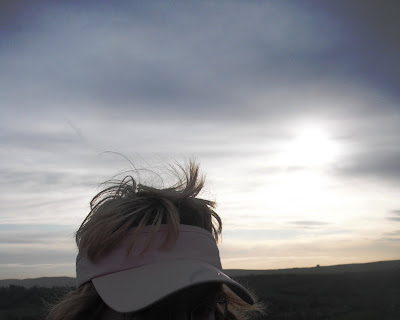 It wasn't far to the next village, Earl Sterndale, and the path comes in, across a boggy field, just behind this pub. I must say the back of the pub looks a complete ramshackle mess. I was half thinking it might be a derelict pub till I saw they were open at the front. 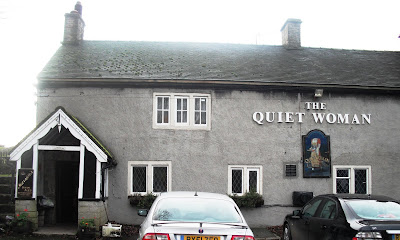 I like the sign though, made me smile. The story goes that the landlords wife nagged him that much, he chopped off her head. It's a Marstons pub, beer brewed in my home town. You can't beat a pint of Marstons Pedigree, it's known the whole world over. 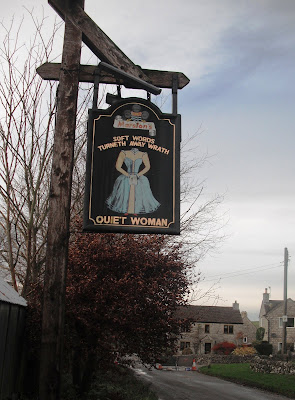 This is St Michael's Church. 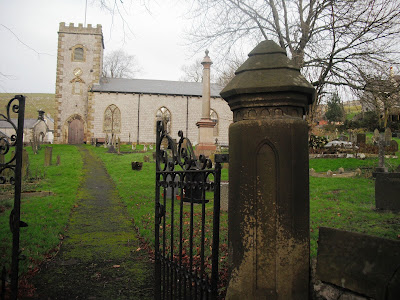 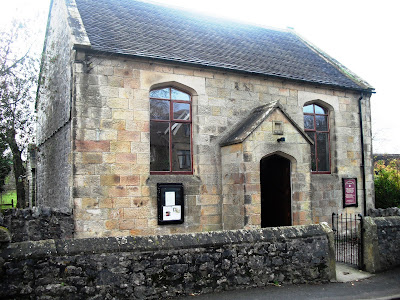 And here we have The Hall, well that's what it says on the front :o) Clever aint I. 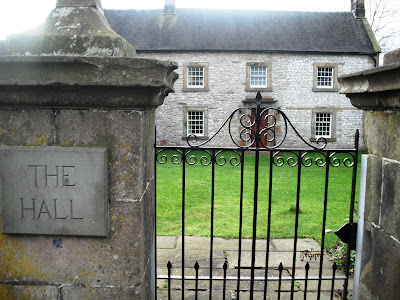 I really would like to go and climb up High Wheeldon over there, but I haven't time. I carried on to join the High Peak Trail, which is also The Mid Shires Way, leading onto The Pennine Bridleway. Then followed a failry brisk march past Sparklow, turn right at Moscar Farm, and join the road at Vincent Farm. 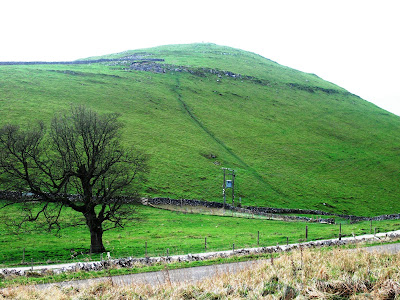 And this is what I found at Vincent Farm, my path was blocked by a bunch of mooing, pushing and shoving cows. I asked the farmer what was happening. He said they are sorting them out, pairing up the mothers and calves, before putting them in their winter housing, basically big sheds. There they will stay untill May. 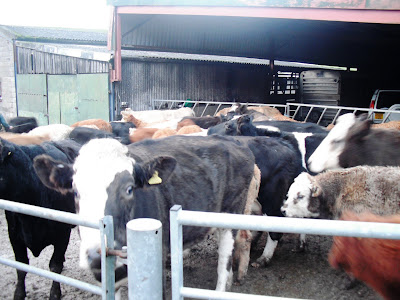 The farmer pointed out a diversion I should take to get round them and out the other side to the road. Then it was a case of following the road back to the hostel. I've had a brilliant day, even better than yesterday. I've covered 14.5 miles, more than yesterday because I didn't get lost, a total of 28 miles over the three days. All I have to do now is to drive home, a happy bunny.
Posted by Meanqueen at 10:40