Keeping on top of it all

Last Saturday it was our Christmas Fair in the Village Hall, we had our stall selling bricabrac to make some money for the pussycats. Here is the lovely Janet giving us a big smile, say cheeeeese :o) Sue has gone walkabout, she is a bit shy of the camera. 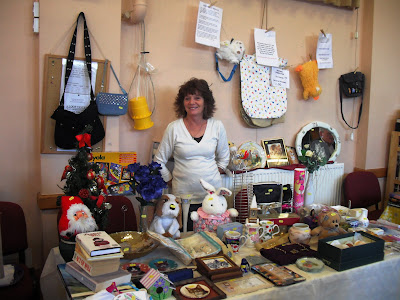 I got up on the stage to take this one, all kinds of stalls. My favourite? The WI cake stall. I bought us a muffin each to have with our drink. 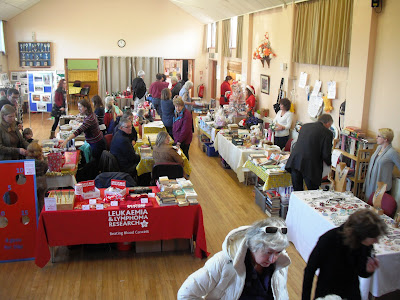 Sadly we didn't make much money, never mind, we tried. We have another one to do this Friday at the school, keeping our fingers crossed for a good turnout.

I went to town today to pay my council tax, I paid for January as well so that's me finished till the next bill comes out in late March for April payment. I've had a letter through from the government, I am to get a winter fuel allowance of £200, that will be usefull. It will cover my gas and electric for about six months, probably longer according to the predictions made by British Gas. I have put the heating on for an hour in the evening a couple of times, but it's not on at the moment, it's not that cold tonight.

I had to make a complaint at the B & M discount store today. The price label on the shelf said £1.10, for four tins of Feline Fayre cat food. They went through the till at £1.20. You've got to check your till receipts before you leave the store these days.

I went a bit mad and treated myself to two bags of crisps from Home Bargains. I haven't had crisps for ages, several months probably, and I had a bit of a craving for them. They were Walkers Crinkles, at only 15p a packet, so it didn't break the bank, and they were lovely. I used to be totally addicted to crisps but have managed to wean myself off them, now I would never pay full price for them and only have them occasionally for a treat.

I wanted a jar of Nescafe but none of the discount stores had it on the shelves, strange there is usually lots. I decided to get a jar of Maxwell House Classic Full Roast instead. It's not much different from Nescafe, and if I mix it with what I have left I will not be able to tell the difference. It's cheaper as well.

I took a look in the new Poundland store which has just opened, my goodness what a load of rubbish they sell in there. I am pretty savvy with the price of things, and the tricks they pull to get you to think you are getting a bargain, it's all a load of cobblers. Most of the food is expensive brand names, and they have adjusted the size so it fits into their 'Everything £1', theme. Some of the cheaper items are two or three for £1, but when you work it out, they are still more expensive than the supermarket own Value items, it's a big con. Have you noticed how they always put the word ONLY in front of their prices on the shelves. They must think we are simple. I did buy one item for £1, a pack of 3 tins of tuna flakes. Tesco have put their Value one up to 45p now, so I thought I would give these a try and see if the cats like it. I like to give them a treat, and 33p is better than 45p. It's flippin hard work trying to keep on top of it all.

I have been spending a bit of time on the Money Saving Expert forum just lately, I do feel for people who haven't got much idea about how to live frugally. There's a lot I don't understand about debt management because I have never been in serious debt, but I do know how to cut spending to live within your means. Some people do not understand the concept of only spending the money you already have. I try and do my bit on the forum. Toodle pip.
Posted by Meanqueen at 18:48