Today was the day when I let mum cat Heidi have a look round the garden. She has been here five weeks now with her kittens, and she is longing to go outside. The back door is open and she is wondering what to do next. Oooh look, shall I go or not. 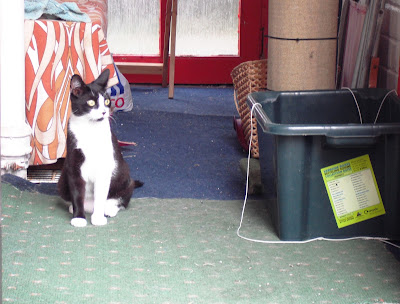 Oh go on then, I'll just pop out for a few minutes, the kids will be ok in their room. 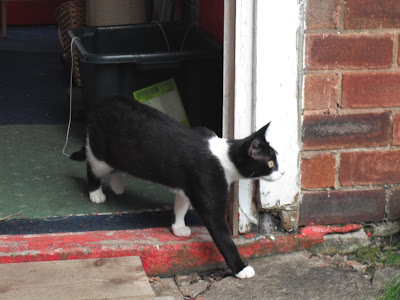 Hmmm, interesting. Wonder what's through there. 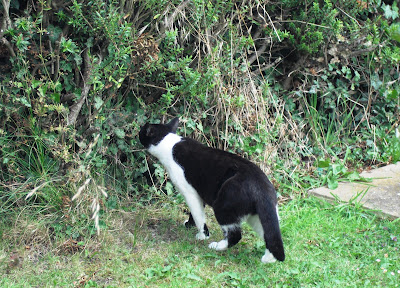 Five hours later she came back. Think she's got used to the place now. After tea she went back in the room with her babies.

Now, dinner tonight. I'm running down my food in preparation for going away next week, there isn't much left. Some scabby carrots, bought just as they went out of date 12 days ago, should be alright. There's enough for two dinners, I'll have the rest tomorrow night. 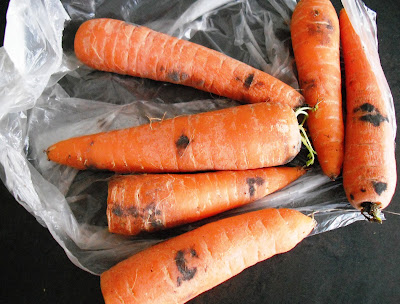 Cut off the black bits. 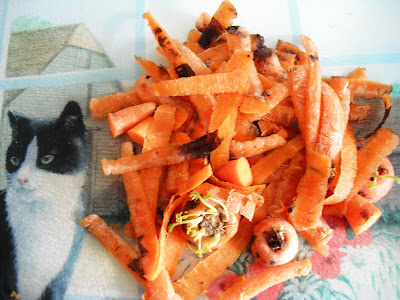 Add some potatoes, also out of date, two onions, and the last bag of dead cheap peas I bought and froze, the ones in the pods. Steam them in a pan and add two grilled Quorn sausages, on special offer £1 for eight. So, a dead cheap meal. 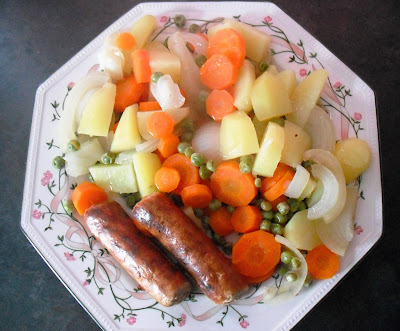 I've had three emails from bloggers who might be able to meet up with me next week on my way south. One's a definate, I'll be popping in to see Billy Jane from Techno-Billies, she's just outside Oxford, I'm looking forward to that. The other two who have shown an interest are near Portsmouth and Worthing. I'm hoping we can get something organised. If there is anyone else who wants to meet, please email me, address on the side bar.

I'm going to have a full week of it, this is how it's looking so far. Meeting a friend for lunch at Banbury on Tuesday 1pm. Meeting Jane later on for afternoon tea, and home made scones, yummy. Booked into a farm B&B near Woodstock Tuesday night. Wednesday walking, Woodstock area and Blenheim Palace. Wednesday night at my friend Carol's near Alton Hampshire. Thursday morning she drops me off at Farnham Station where I get the train to London to go and see my yacht, ha ha. Back to Carol's for a second night. Friday morning drive to Portsmouth and have a look round. This has been cut to a one day visit instead of two, after stealing a day for London. Friday teatime drive to John's of Don't unplug. Camp for two nights there. Sunday and Monday are two walking days. I am booked into Arundel Youth Hostel Sunday night and Monday night. Tuesday I was plannming on going home, but my dentist appointment on Wednesday morning has been postponed till a later date, so I could stop an extra day or two. I'm leaving it open at the moment in case anything comes up. I might go back to Portsmouth if I missed some of it the first time, or I might go to Chichester, whatever takes my fancy.

Just off out with Rocky now, catch up with you tomorrow. Enjoy your Sunday.
Posted by Meanqueen at 20:11

Email ThisBlogThis!Share to TwitterShare to FacebookShare to Pinterest
Labels: cats, food, holidays/days out