Anna has written a book

I've tried writing a book and got so far with it, thousands of words on my computer, but the truth is I lose interest in long term projects. I can't stick at it, a bit of a flibberty jibbet that's me. Crikey, where did that saying come from? Must look it up, what does it mean? The Urban Dictionary has a brilliant interpretation. 'One who hops about like a fart in a frying pan', ha ha. Oh how I laughed out loud when I read that, yep that's me alright, definately a fart. Can't write for giggling now.
Anyway, after that light hearted interlude I'll carry on. I much prefer writing daily on here, it means I can belt something out on the keyboard, add some pics and jiggle it about, publish and move on to the next project. I've always got several projects on the go at the same time and flit from one to the other.
I've been following John's progress with his book over on Don't unplug your hub. Sounds like he has been hammering away on the keyboard at an amazing speed. It doesn't seem that long ago when he announced he was starting it. Now it is getting proof read and he is drawing the illustrations. Won't be long before it goes into print. I hope everyone will buy a copy, he really is a tallented writer.
http://dontunplugyourhub.blogspot.co.uk/2012/10/i-really-am-most-talented-writer.html
My sister Anna Maria is a writer, well she has been at it for a lot of years, mostly magazine articles, fact and fiction, but now she has a book finished. It is a romantic fiction story, and she has tried it with a couple of publishers but not been lucky with anyone accepting it. So now she has decided to put it on Kindle. 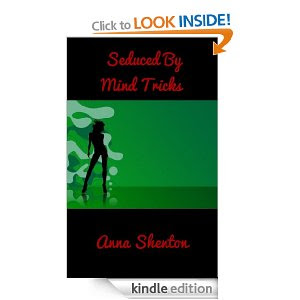 I haven't read it, because I don't read fiction, and Mills and Boon type stuff is just not my cup of tea. Anyway, here is the link to the book, should you wish to take a peek, it's on Amazon.
http://www.amazon.co.uk/Seduced-By-Mind-Tricks-ebook/dp/B009L5R8QE/ref=sr_1_1?s=digital-text&ie=UTF8&qid=1350473092&sr=1-1#_
If you go to this page you can open the book for a synopsis. Anna tells me you can get a free Kindle App on your computer from Amazon, enabling you to download a selection of books for free, and there are millions to purchase should you wish to do so. You need to have an Amazon account to do this. I haven't tried it because I spend enough time on the computer already. But for someone who wants to read but doesn't have a library, I think this is a jolly good idea. Happy reading.

Got to go, something else to do. Toodle pip.
Posted by Meanqueen at 13:37