I have just finished reading this book, and it was as I expected, it made me cry because of the horrific atrocities that the author was witness to. They happened to people he loved, his family, those who he regarded as his family, and his friends. In all the awfulness of his situation he did manage to find some compassionate people who helped him to survive. 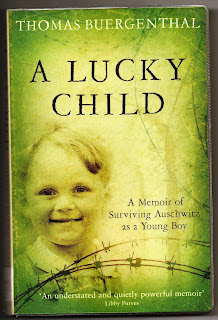 Thomas was born in Lubochna Czechoslovakia, on the 11th of May 1934, his parents were Gerda and Mundeck Buergenthal. They were forced to leave their hotel which was also their home, by the Hlinka Guard, the fascist party which controlled Slovakia with the support of Nazi Germany. They claimed to have a court order declaring one of it's organisations as the owners of their hotel. This was the start of many years on the run, being shunted about from camp to camp, either on trains or walking many miles on the road. Thomas was five years old.

His father was Polish and his mother German so Tommy grew up able to speak both languages, which was very usefull to him when it came to listening in on conversations enabling him to keep one step ahead when the going got tough. He was a very bright little boy.

The family were moved to the Ghetto of Kielce which was surrounded by walls and fences. It was a terrible place and very dangerous. It was a regular occurance that the German guards conducted raids, and pulled people out at random and shot them.

Tommy was ten years old when he arrived at Auschwitz concentration camp. Although this camp is notorious for it's extermination atrocities, it is actually another place nearby called Berkenau where the killings were carried out. Years later Tommy realised that he was actually very lucky to be taken to Auschwitz as there were other places far worse to be sent to.

Some time later their camp was evacuated and so began, one cold January morning, the Auschwitz Death march. This was the worst time of his life. Tommy had two of his toes amputated because of frostbite, at one point he was scared that they would amputate his feet, as that would have meant certain death. The sick and elderly were easily dispensed with.

Tommy survived through mainly his quick wittedness and ability to grasp the situation he was in. He learnt the tricks of survival, but for most of the time it was his luck that helped him. He was a very lucky child.

He was seperated from his parents, his father he never saw again, but he was able to find his mother two years after they lost each other. Fast forward and after the liberation in 1945 Tommy went to live in America with his aunt and uncle. He has spent his life as a leading human rights lawyer.

This is the first book I have read about Nazi Germany and the concentration camps, I think I preferred not to know too much about it because of my German connections. My mum told me she was in a camp for a short time with her parents although they weren't Jewish, but she didn't go into great detail, and I didn't press her on the subject. She was always a very emotional person, always very protective of her children, so much so that I felt smothered at times. This book has given me food for thought, this terrible time in history should never be forgotten.

There are important lessons here, about resilience, finding strength to carry on when so many gave up, and eventually having the remarkable ability to quash all feelings of revenge. To forgive but not to forget.
Posted by Meanqueen at 12:57