I went into town to pay a bill today, and needed to buy a few items, mainly cat and dog food. We have quite a big B & M shop in the High Street, it's in the old Woolworths store. I've been cherry picking a few items from here for a while as some of their prices are quite good. Their 1kg boxes of Bakers Complete Meaty Meals (I call them meaty chunks) are £1.99, whereas in Tesco and other supermarkets they are £2.88, a big saving. They also do pouches of Feline Fayre cat food, mostly fishy in jelly, at 25p each or five for £1. That makes it £2.50 for 12, the same price as I would pay for a box of Felix pouches when they are on offer. By the way, never pay full price for cat food pouches, there is always an offer on somewhere.

B & M do 200grm packs of cooked ham for 99p, far cheaper than the supermarkets, and it looks alright as well. Not that I eat it, it's a treat for the cats and Rocky. My treat is cheddar cheese with herbs and garlic, 99p for 160grm, it's delicious, I try not to breath on anyone when I eat that, ha ha. It's very tasty, I keep pinching a bit every time I open the fridge.

I had a mooch round the food section while I was there, just in case I missed anything. I got a packet of wholegrain crackers for 19p, a bottle of Zest lemon juice 330ml for 35p, and two flapjacks at 19p each, which is cheaper than the cash and carry. Six free range eggs were 89p which I thought was quite good. I also bought a bottle of bleach for 39p. If you look in a Pound shop you will see the same thing at two bottles for £1.

I popped up to Morrisons to check out the price of cat food. The Felix pouches weren't on offer but the foil trays were, at £2.50 a box, so I got some of those instead. While I was there I checked out a few other prices as well, and was surprised to see that some of the items were more expensive than in Tesco. Tins of Value peaches are 29p in Tesco, 39p in Morrisons. Tins of Value rice pud are 12p in Tesco, 27p in Morrisons. There wasn't many people shopping, I spoke to one woman about prices and she thought things were expensive as well, she prefers Asda. It's very difficult to say which supermarket is the cheapest because it all depends on what you buy.

While I was up that end of town I had a look in Poundstretcher, and was surprised to see the same cat litter as I have been buying from the pound shop, at 99p. 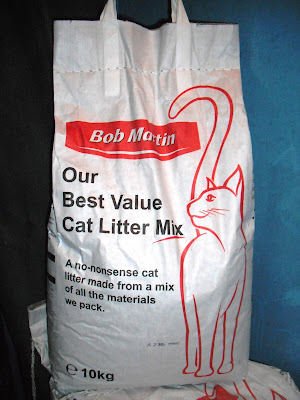 Now this is a good buy if anyone has the clumping cat litter. Personally I prefer it, easier to scoop the dirty litter out. The only thing with this one is it's slightly dusty, but I can put up with that. The supermarkets own brand is £1.58, so a big saving.

I was reading on a forum, someone posted about supermarket prices rising and their shopping bill was shooting up by pounds each week and they felt helpless to stop it. There is only one answer to that, you can't change the prices so change your shopping habits. Don't do the whole of your shopping in one supermarket. Ditch your shopping list and go with an open mind. Be flexible in what you eat. If the price of something you regularly buy goes up, look for an alternative, something which is just as good but cheaper. Stop snacking, no crisps, chocolate, pop, cakes, biscuits. These items are treats and should be consumed occasionally, not every day. I have managed to wean myself off these now, I don't go down these aisles at all. Another thing you can do to save money is make more meals without meat. Gradually reduce your meat days and increase your veg days. Happy bargain hunting.
Toodle pip.