I'm back. A bit of an argybargy going on in previous posts, eh. I leave you a few hours and look what happens. I'll go back and read the comments again, and add a few of my own. In the meantime, here is the book review.
I really enjoyed this book, if anyone is thinking of going down the self sufficiency route this book is a must read. It is a diary of a year in the lives of Dan and Bel, who were dissatisfied with the direction their lives were going, and made the change from city to countryside. They sold up their London flats and bought a remote and dilapidated farmhouse in Mid Wales. 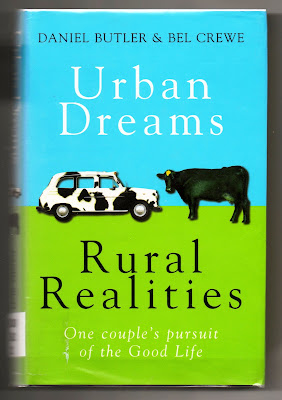 Dan was far more enthusiastic to embrace this new lifestyle than Bel, she wanted to give up many times. Slowly she also began to enjoy her surroundings, and got on with the job of growing vegetables, with gusto. The story is told in contrasting voices by each of the pair in turn, there is plenty of humour in it. Dan's ludicrous optimism is totally the opposite to Bel's pessimism.

They start by growing vegetables, catching and eating wild rabbits, then they buy ducks and an assortment of poultry, and two pigs which they reared for food. Any vegetarians might not like to read their emotional accounts of how the pigs were turned into food for the table.

As the story unfolds there are accounts of Dan's falconry, rats living in the roof space, how they turned tons of apples into juice and cider, foraging for mushrooms, dispatching the ducks for food, and salmon poaching in the middle of the night. Their son is born half way through the book which puts another dimension on things. At the end of the book they quickly fast forward a few years and a daughter is born.

A thoroughly interesting and entertaining story, and very well written, A joy to read.
Toodle pip.
Posted by Meanqueen at 15:40