Well would you Adam and Eve it, (rhyming slang). It's been hot hot hot today, such a contrast from yesterday when I was constantly having to wipe my dripping cold nose. Today it's been shorts and teeshirt weather. I thought I would give you an update on the sunflowers, my little babies are shooting up, the tallest being 15 inches high. The wind has dropped so it's time to get them outside.
There are eighteen, one of them is a little sickly and has not grown as tall as the rest of them. This spot in the garden has the most sun, it comes up from behind the trees and makes it's way across the back and round the side of the house, then goes down at the front of the house. The plants are still in the sun now at 7.15pm as it shines through the gap between the two houses.
I have used six plastic storage boxes and put three plants in each. I was going to use nine boxes with two in each, but I didn't have enough compost, and they wouldn't have fitted on the decking. I hope they have enough room to grow, they didn't appear to have very big roots when I took them out of the pots, so I'm hoping that they carry on growing and don't get too crowded.  I bought the boxes from Tesco for £1 each, when I started growing vegetables five years ago. I have grown tomatoes, cucumbers, and carrots in them. The plastic hasn't crumbled, unlike the ones I bought from Poundland. These are not so brittle and should last a few more years. This is Bugsy's favourite place to take a snooze. The wood must get quite warm. 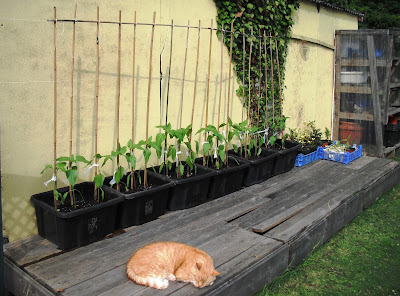 And then I noticed he has stretched out so I took another photo. 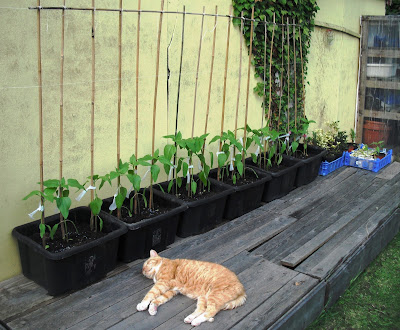 Anyway, wish me luck, the babies are on their own now, I don't think I am going to sleep tonight worrying about them. I'll keep you updated, wouldn't it be lovely if I get eighteen big yellow flowers.
Toodle pip.
Posted by Meanqueen at 19:39