Make your own crisps, it's cheaper than buying them

I fancied some crisps today, but I didn't want to spend any money. I am trying to keep out of shops at the moment, to give my battered bank balance time to recover. I'm eating what I already have, and tonight for dinner was the third portion of a three day veggie curry stew. So, I had three meals out of five potatoes, three small onions, a handfull of frozen peas, and sweetcorn, and a tin of red kidney beans. Lunch was two cheese rolls, the wholemeal bread was bought for 25p on a yellow sticker. Breakfast was cereals and a banana. I have to confess though I dip into the peanut butter and the ground brazil nuts when I open the fridge door. Just to fill a little hole and keep me going, ha ha.
Anyway, I posted about how to make home made crisps in October 2010, it's worth another mention as people may not have seen it, and it will save you money. It's dead easy. Take one potato, the glass plate from the microwave, and a gadget to slice the potato very thinly. 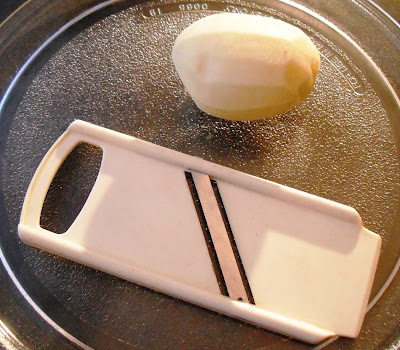 Put a few spots of oil on the plate and smear it all over with your fingers. Spread the sliced potato over the whole plate. 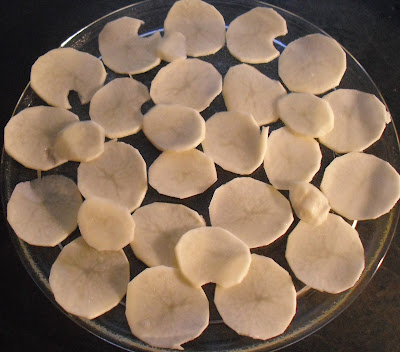 Microwave until brown and crispy. It takes about eight minutes. I do mine in short bursts, opening the door to check how they are doing. Once they start turning brown you need to be carefull not to leave them in too long, get them out quickly before they burn. Use a knife with a large flexible blade to scrape them off, I use the bread knife. You can sprinkle salt on them if you like, I don't because I never add salt to anything I cook. Easy peasy crisps. 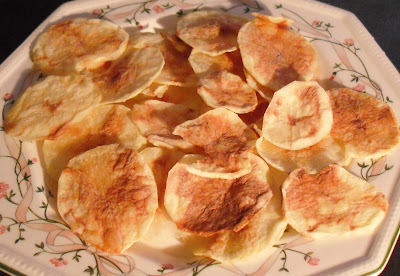 It was a bit windy in the garden today, so I have rigged up a plastic cover for the sunflowers. I cut a clear plastic sheet the right size and clipped it to the edge of the garage roof at the top, and along the rims of the boxes at the bottom. They have their own greenhouse now. Other garden news, I am hopefull that I will have a good crop of broad beans, all the plants are in flower with some bean pods starting to appear. Some of the runner beans have flowers, but the courgettes are a little slow to grow. The potatoes look great, lots of greenery, so I am hoping there will be a lot growing underneath as well.

I'm not sure if I can hold off the food shopping until after the weekend, I am a bit limited to what I can make with what I have. I am not going to go to the extreme I did before when I ate everything I had. As long as I use up some of the tins and packets that will be enough. I have a few mushrooms left, so it will be mushroom omlette for lunch tomorrow I think. Then maybe pasta for dinner. We'll see. No meal planning here, I'll just have whatever.
Toodle pip.
PS, I've had some very nice emails from my lovely readers, thank you very much. I am chuffed that you like my blog, I like writing it. Love and kisses xxx
Posted by Meanqueen at 22:05