The coastline of Yorkshire.

Hiya, welcome back for part two of a day out in Bridlington. After a very enjoyable walk round Sewerby gardens, I decided to walk along the cliff top to the town. There is a train turn around on the edge of the estate, and there happened to be a train about to depart. After a quick word with the driver I decided to carry on walking as it was a lovely warm day, and maybe get the train back. They run quite frequently so no need to make a note of the times, in any case if I missed a train I could easily walk the one and a half miles back. A quick photo opportunity before we set off. 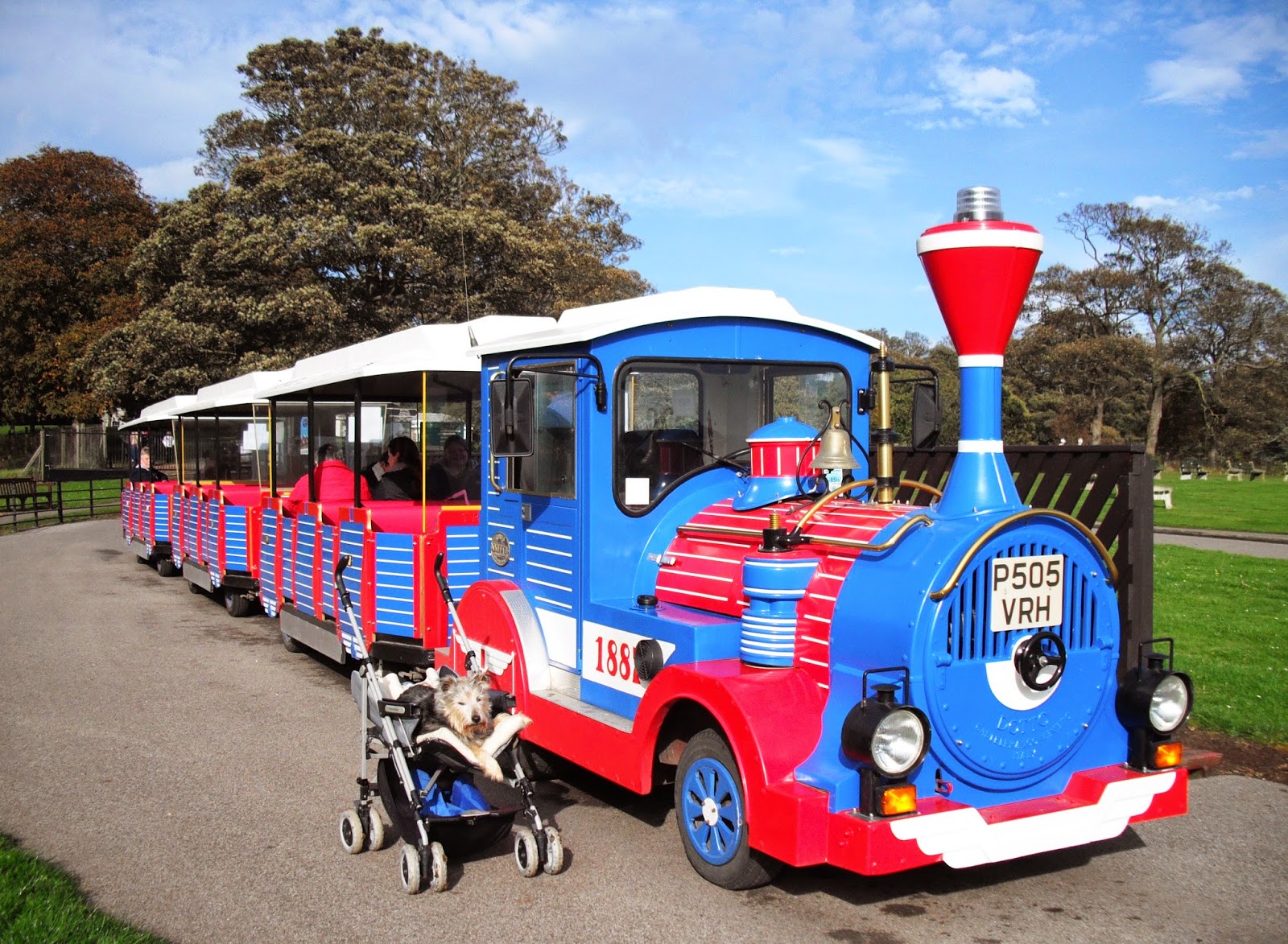 The tarmac path runs close to the edge, and the views towards the chalky cliffs of Flamborough Head are quite dramatic. The beach at this point is very pebbly, not like the soft sand on the north shore. 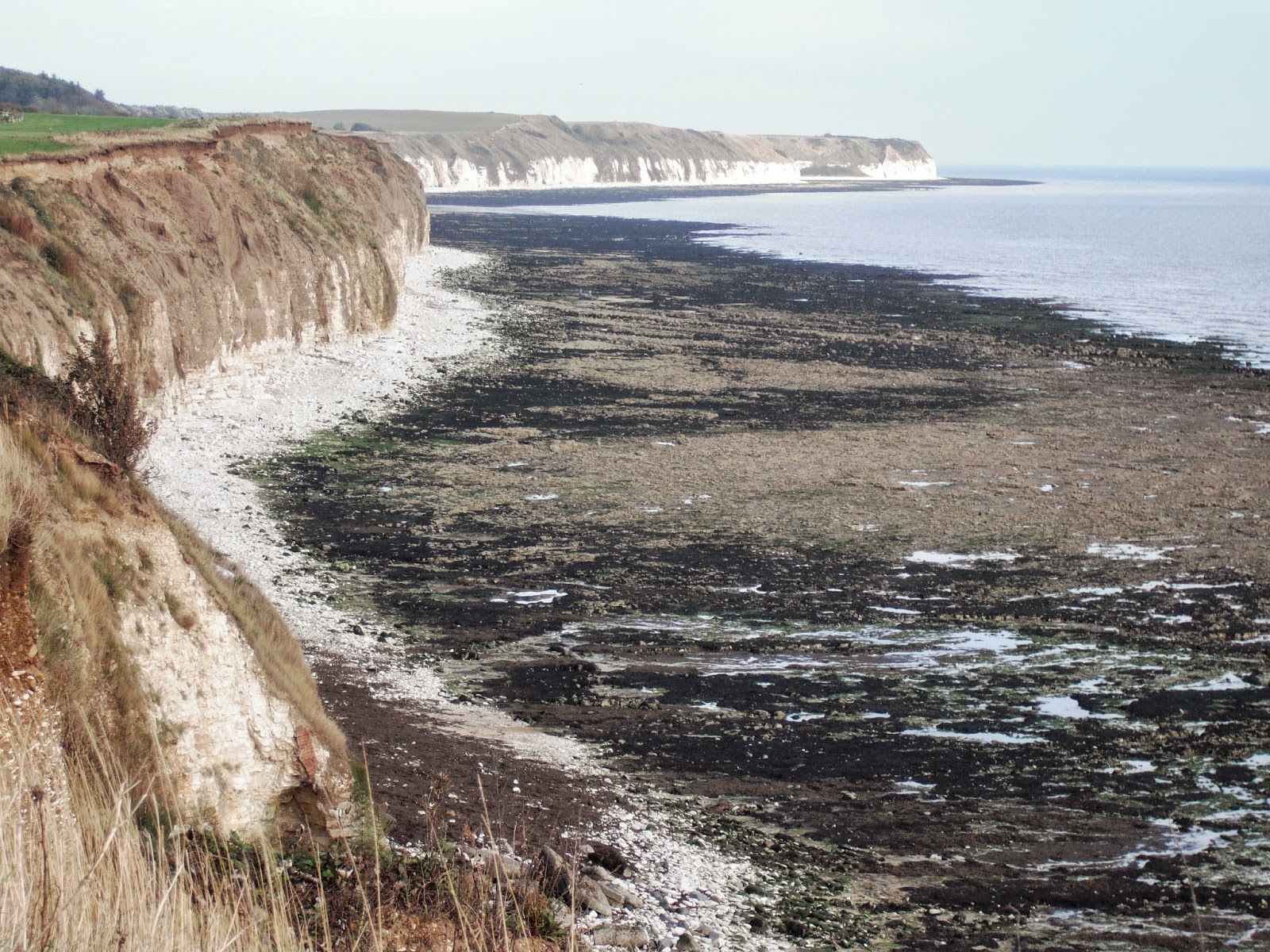 The cliff top is mostly a wide expanse of cut grass. There were lots of people about with dogs, and buggy's. I stood for a few minutes to watch this man unpack his hang glider, then battle with it as he checked the wind speed. I was quite interested to see him take a running jump and throw himself off the edge. Is he ready to go? 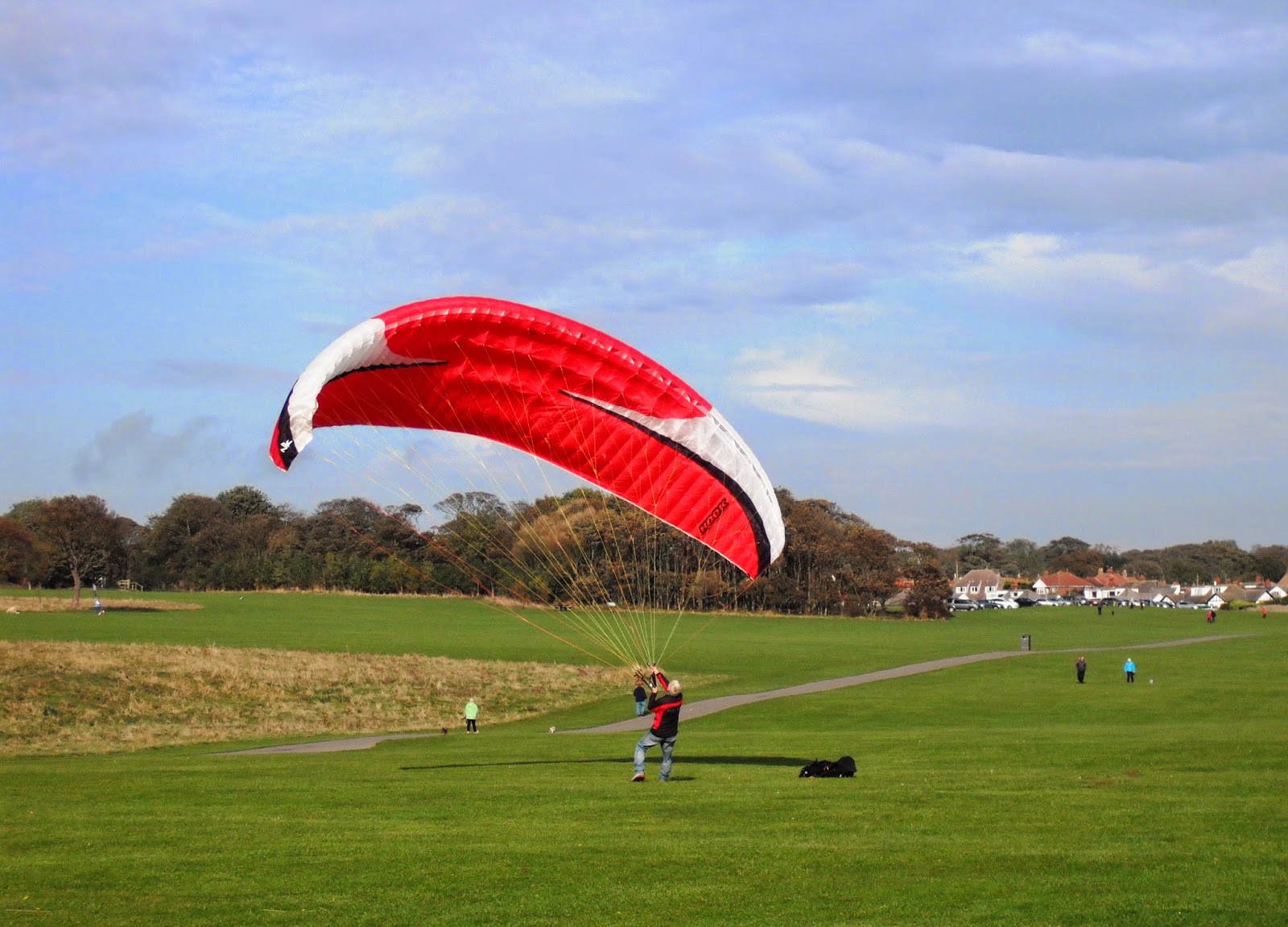 No not yet, it came crashing down, several times. 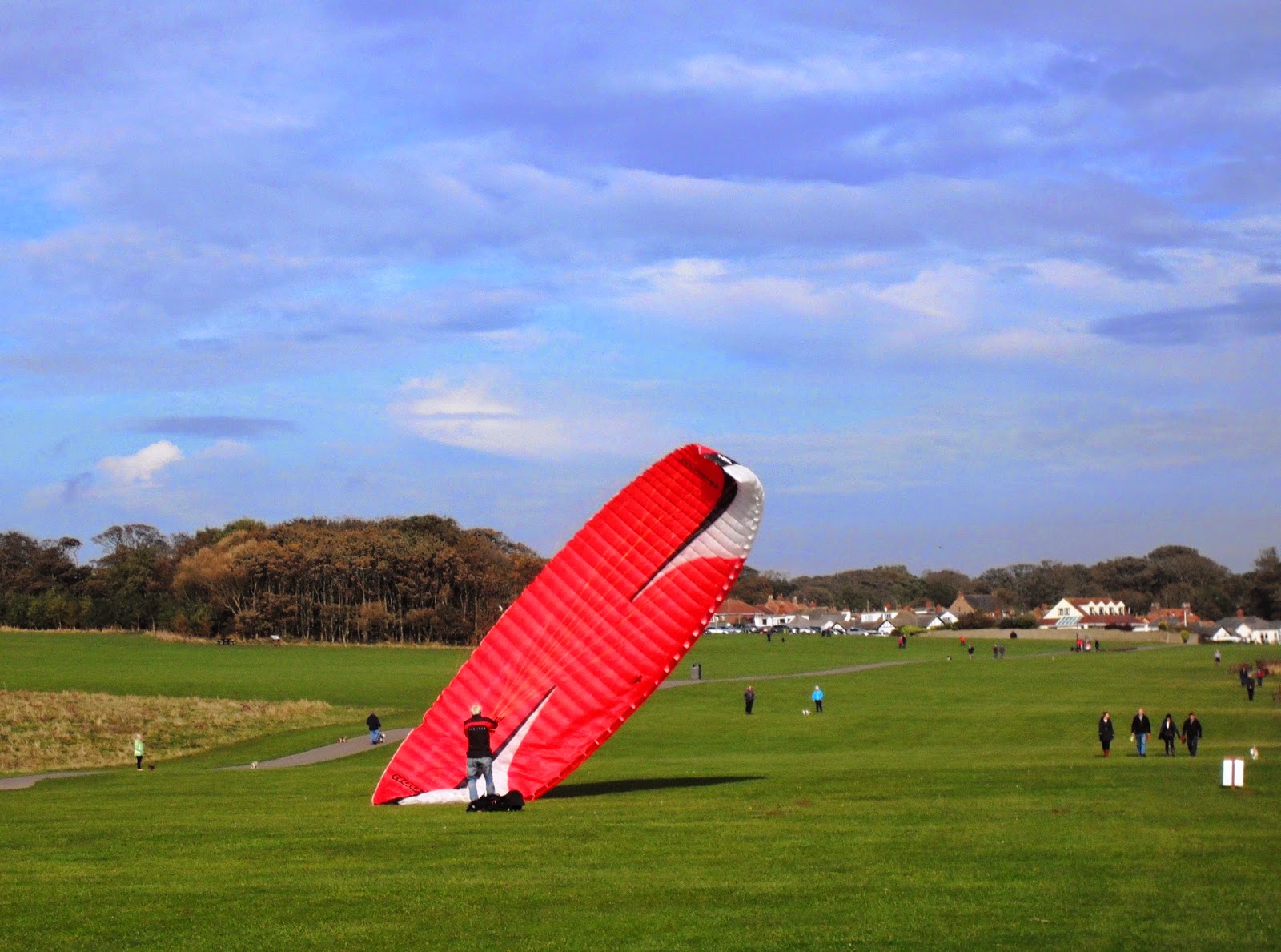 He looks as if he is about to take the plunge, here's the train passing. 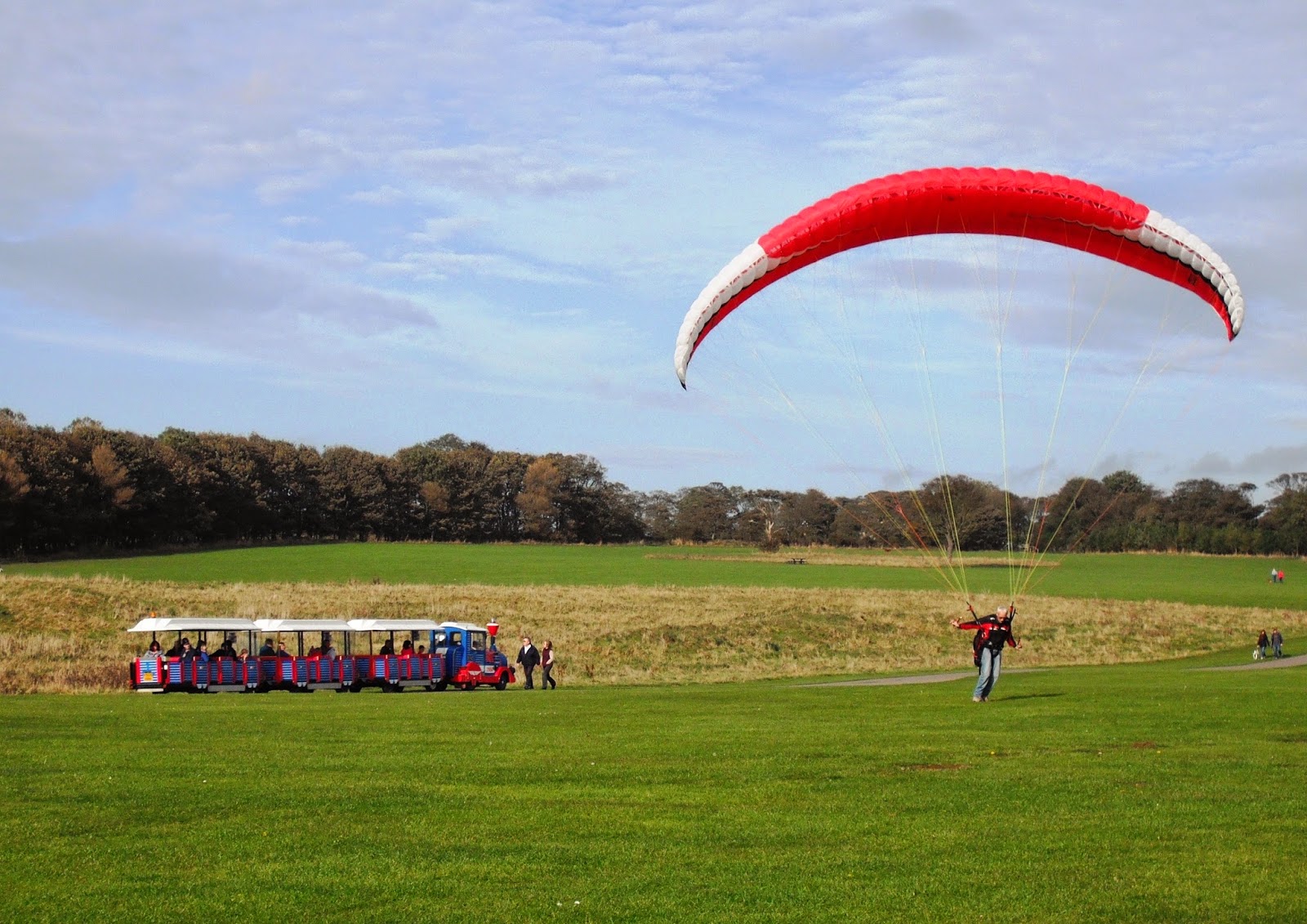 No, not quite ready yet, then the cavalry arrived. Two of his buddies dropped their parachutes to the ground to assist. I waited, and waited, nope, not going, he removed his harness. At this point I gave up and carried on walking. Might see them on the way back. (Note added.....they were gone. The weather changed, and the wind had dropped). 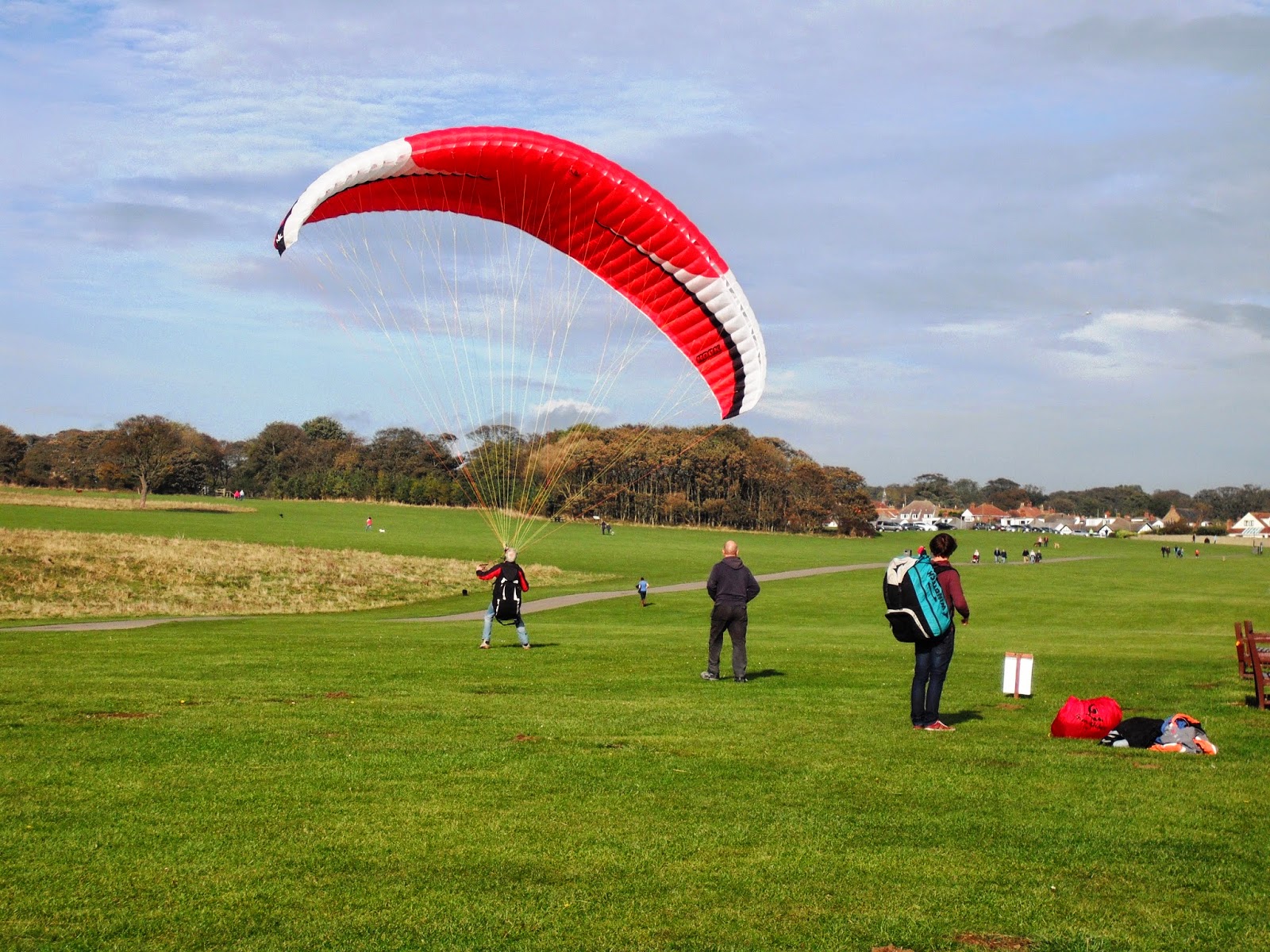 Here is another view of Flamborough Head, a bit further down the coast. You can see the long footpath which stretches from the Hall to the town. There are lots of benches to sit down on and take in the lovely sea view. 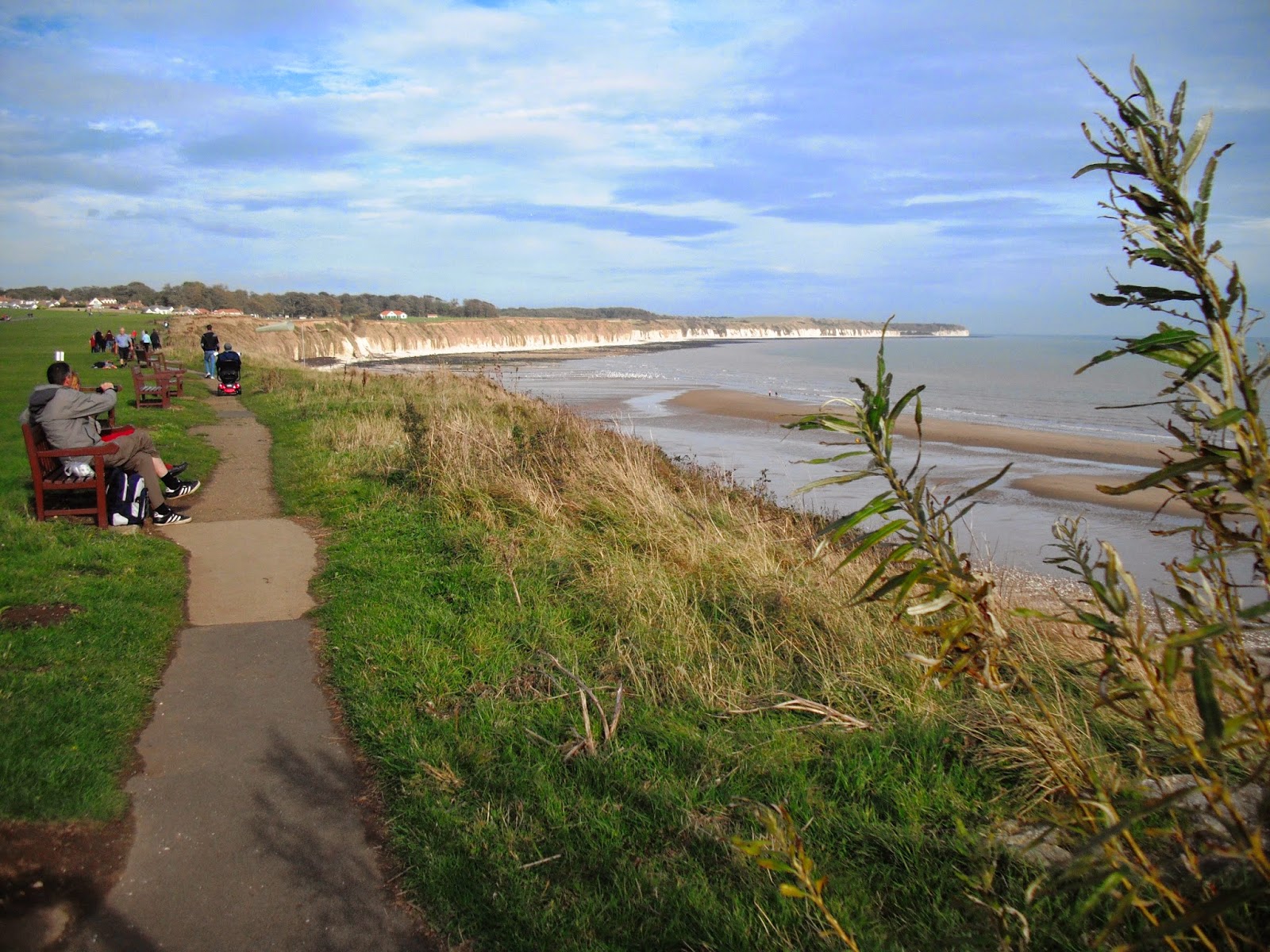 There are signs indicating where you can pick up the train. Both trains are running today. 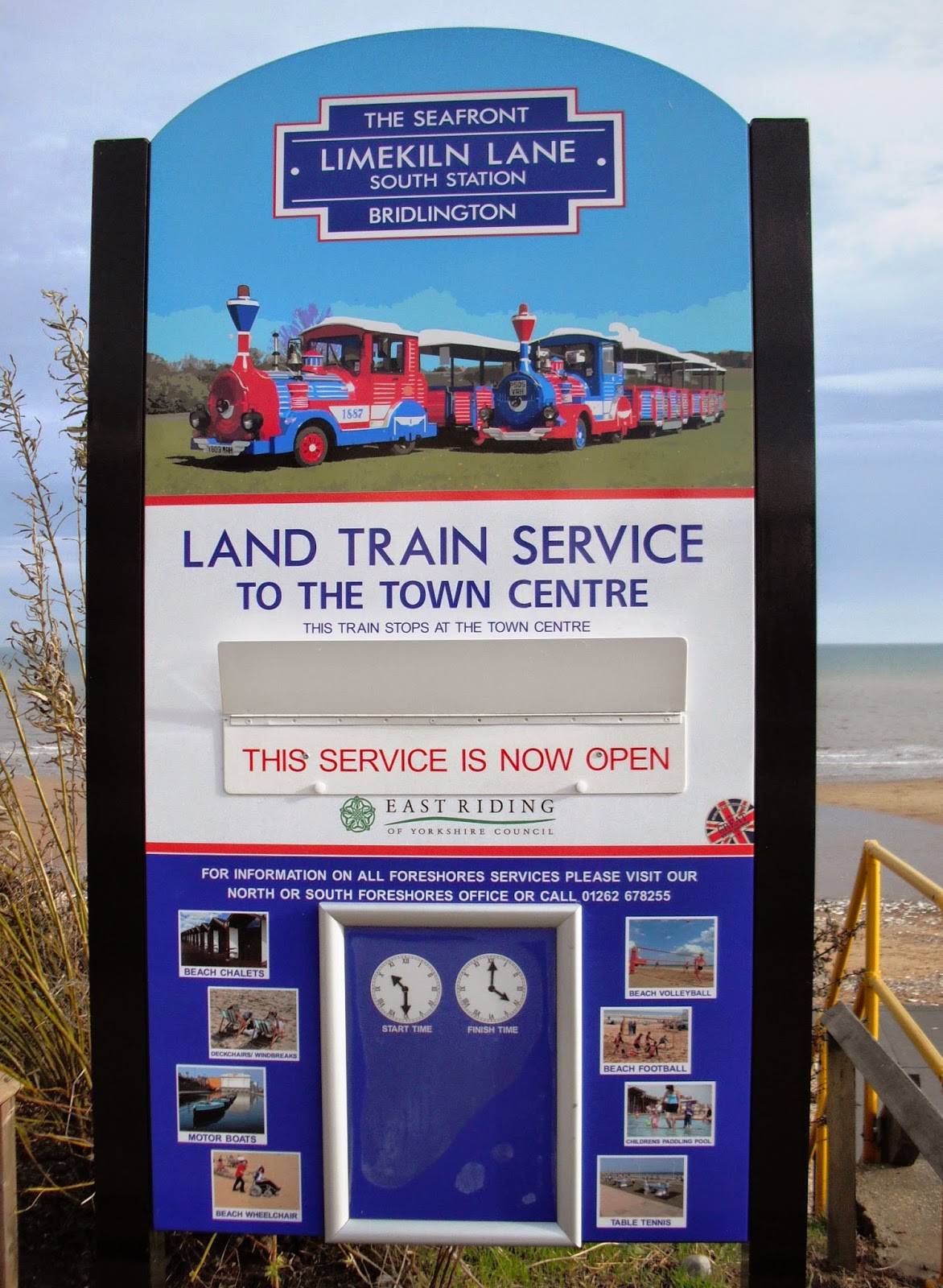 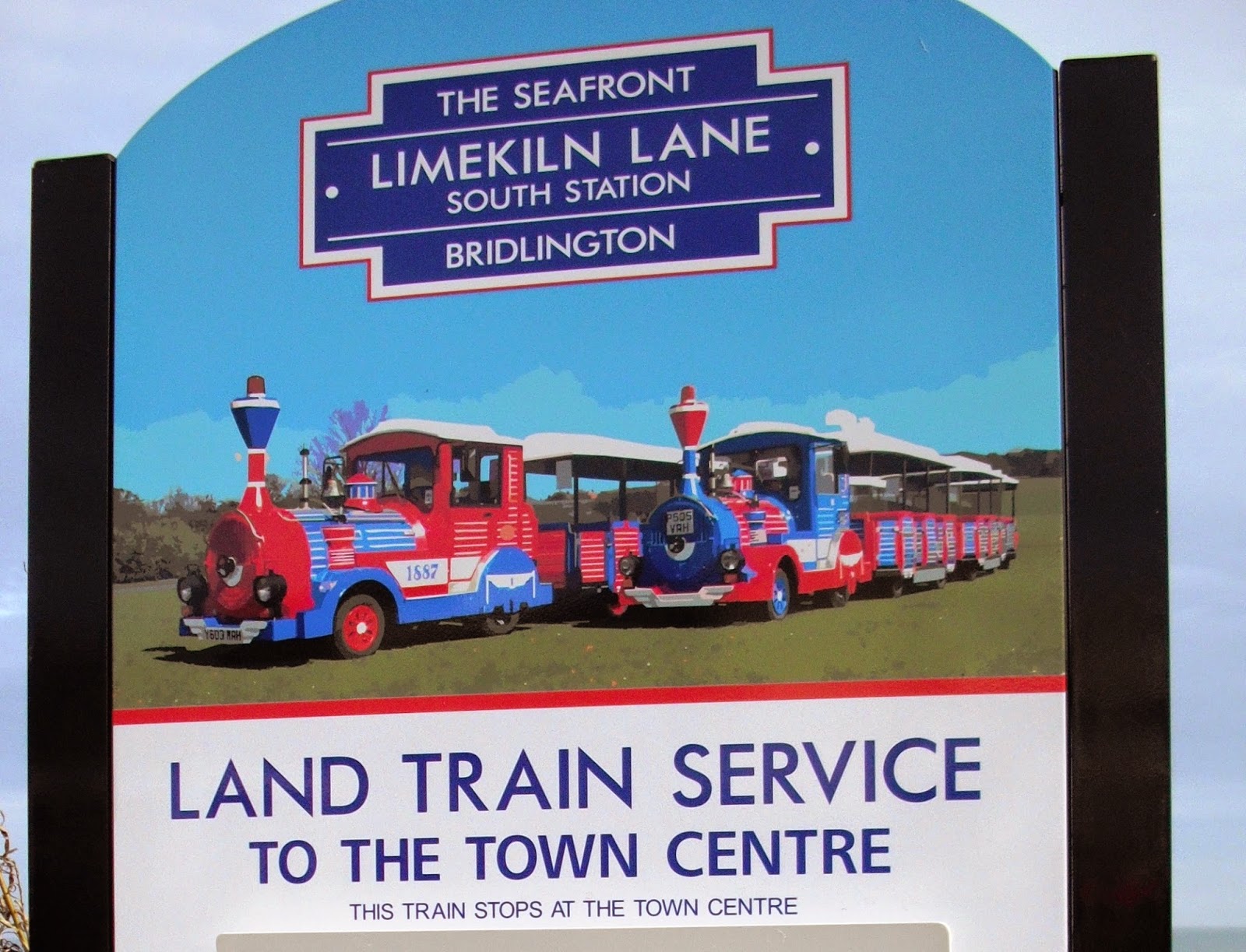 Had to take a picture of this lovely little Morris pick up. The man jumped out and seemed to be in a hurry, I wanted to ask questions. He said it is a 1959, so, fiftyfive years old. Not sure if it is a conversion from a car, looks like it could be. No fancy interior, pretty much original. He even left the key in the ignition while he went on the beach to retrieve his small boat. 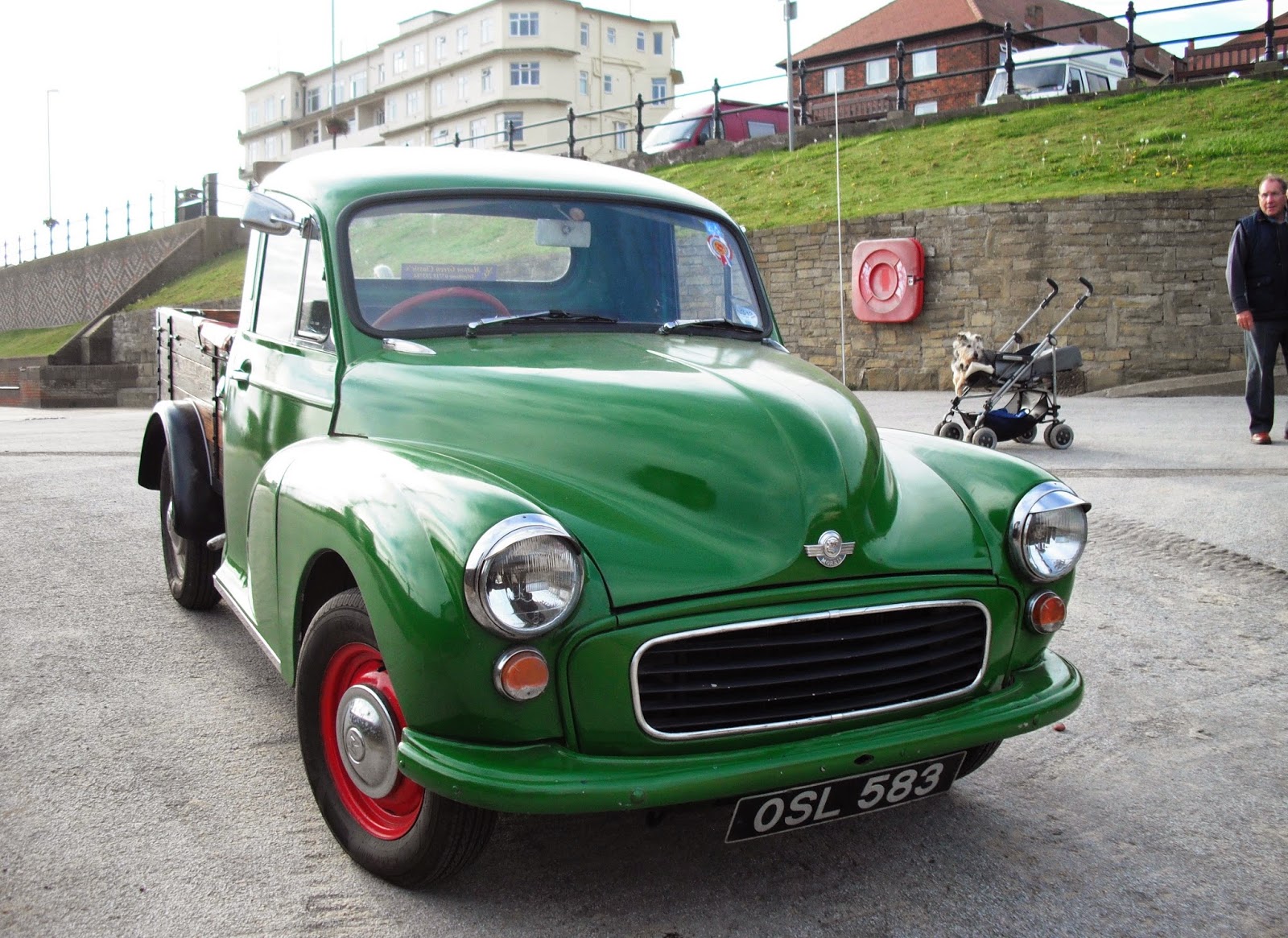 It was a lovely walk to the town, but when I got there I didn't linger, lots of people about. The funfair was busy, flashing lights, lots of noise, and the smell of fish and chips and donuts. I saw someone standing on the train platform and decided to wait. Sure enough a train came along a few minutes later. I didn't know how I was going to get the buggy on board, but needn't have worried, the driver came to the back and lowered the ramp for us to get on. Perfect, in a five minutes we were back at the Hall. 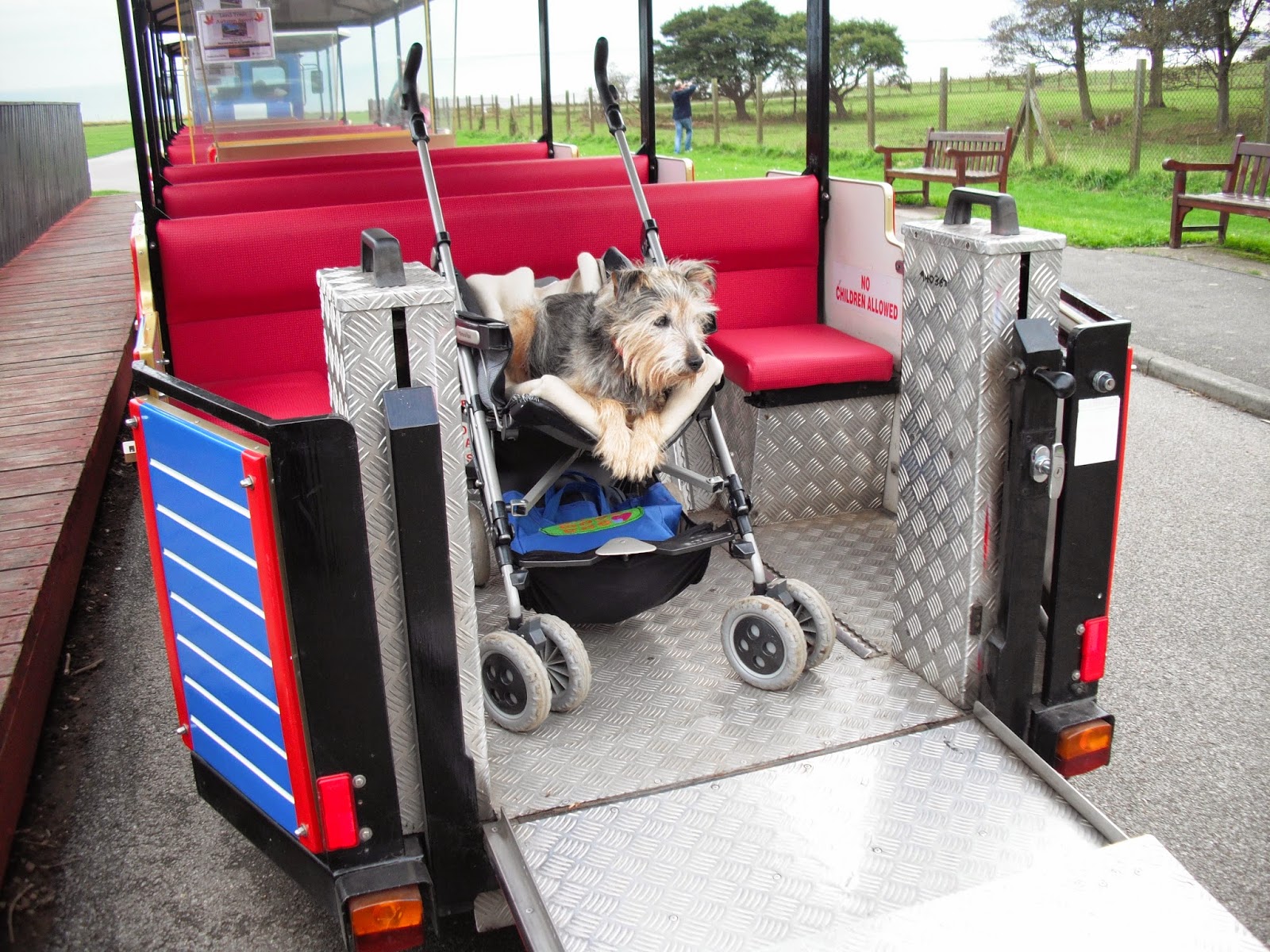 It was half past four when we got back to the car. As we weren't far from Flamborough I thought we would go and have a look. I have been to North Landing before, so this time I followed the signs for South Landing. The road comes to a dead end for motor vehicles, the only ones allowed any further are those belonging to the staff that man the lifeguard station, and other emergency service vehicles.

It's a very steep walk down the tarmac road to the waters edge. Not much sand here, mainly white chalky stones of all sizes, washed smooth by the constant waves lapping over them. Quite difficult to walk over. I knew Rocky would be itching to get in the water, so I carried him  to the edge. He enjoyed his paddle. The light was now beginning to fade, black clouds were looming threateningly overhead, time to head home. It wasn't long before the heavens opened and lashings of rain came down. phew, that was lucky, we made it back to the car. 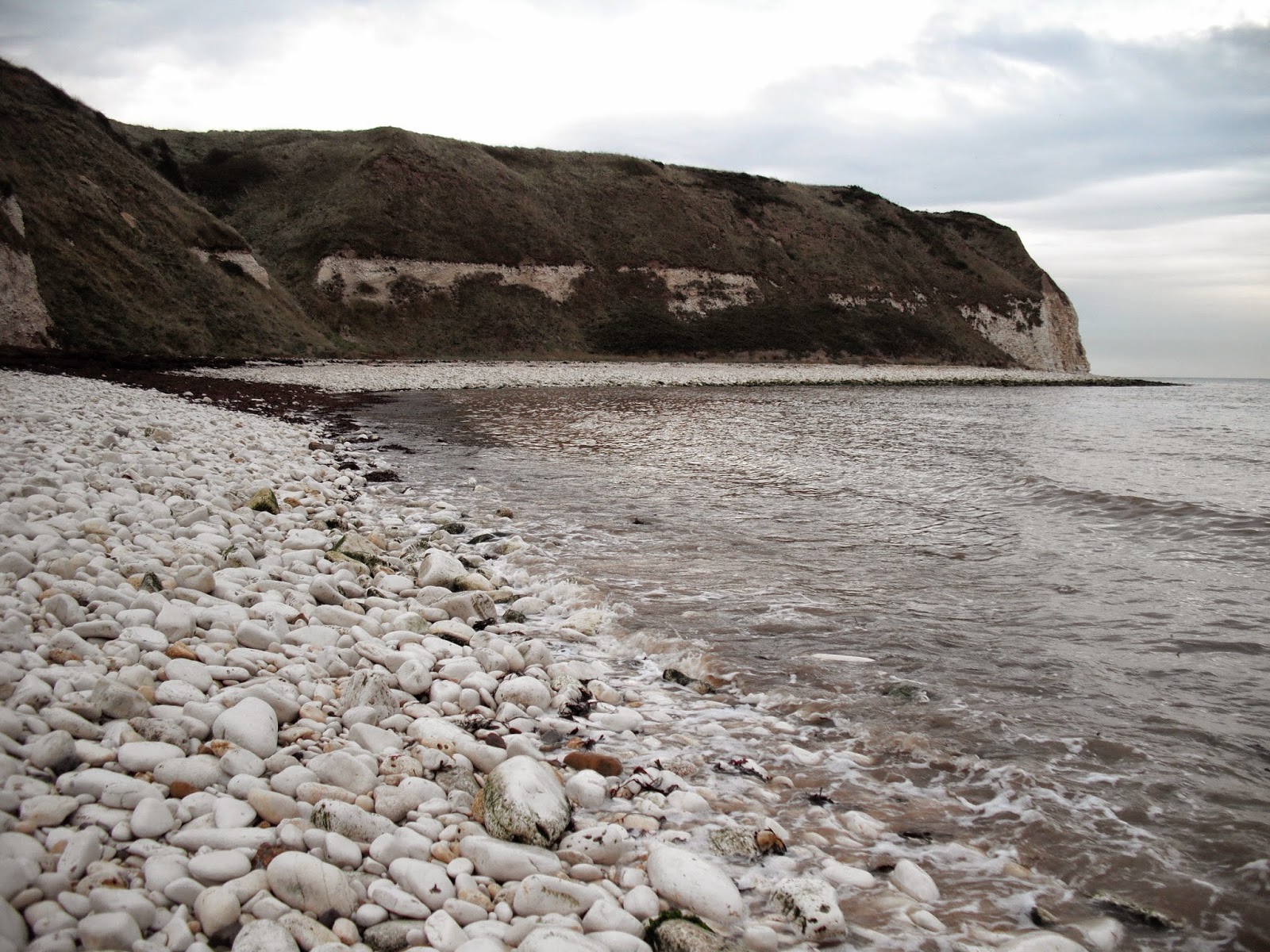 It was gone 7pm when we got back, then it was a mad frenzy to get everybody fed, Of course I had to wait till last, as usual. It was a lovely day out, glad I made the most of the fine weather.

Today it started off foggy, and is only just clearing at 2pm. Sewing for the rest of the day I think.
Enjoy what is left of your Sunday. Toodle pip
Posted by Meanqueen at 14:36