Riding in style, a doggy story

Howz ya didlin then? It's been a good weather day here, I haven't been very far, except locally in the village. Thought I would kick off with a moan today . Look at this daft shaped plastic bottle that they sell mayo in. You stand it upside down on it's lid so the contents run down to the bottom, and then you should be able to squeeze it out over your meal. Sounds ok in principle, and works ok for the first three or four squirts. Then the mayo sticks to the sides and you have to shake like crazy to get even a small splodge to dribble forth from the nozzle. Nothing for it but to cut the darn thing in half, pierce my food with a fork, and wipe it around the inside. I'll stick to wide neck jars in future. Even though this mayo was only 50p, it's not worth the faff to get it all out. 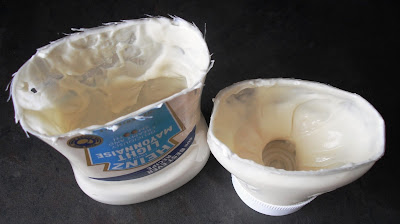 My colourful and simple lunch today. celeriac, courgettes, and mushrooms with salad. It was bloomin lovely. 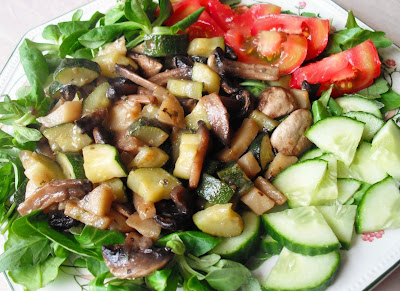 Here's a heartwarming story. I was walking Rocky through the pub car park at lunchtime and came across a dog with a super duper buggy. I'm always on the lookout for interesting and unusual sightings, and like to ask questions. This is Patch the Boxer and he is on holiday here at the caravan park with his owners. They had been a walk and had called in for a thirst quencher.

The story is that Patch lost his hind leg at only a few months old, and found himself in a Rescue Centre. Along came Lyn and hubby and they decided to adopt him, so at 14 months old he had found his forever home. He has lived just about all of his life with three legs and has got on fine. 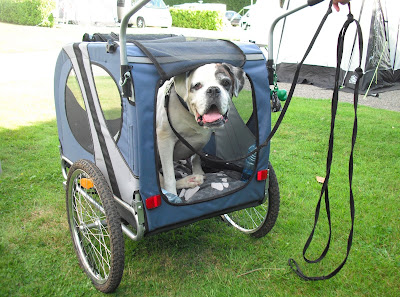 Now he is ten years old, and he has a bit of arthritis. His back is giving him problems, and he can't walk so far, so he needs a bit of help. But look at him now, he has the very best doggy buggy in the world, nicknamed his chariot. Lyn told me that she gives Patch turmeric in his food, made into golden paste with coconut oil and black pepper, and it has made such a difference to his mobility. Another endorsement for the healing powers of turmeric. 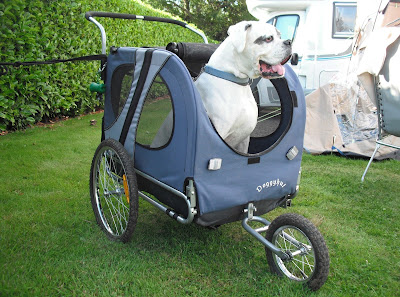 He can sit facing forward or backward. He can have his head poking out the front, or out the top. He has a duvet in it and often climbs in for a sleep. Lyn says it has completely changed their lives. They can now go anywhere in their motorhome and take Patch with them. The chariot will ride over rough ground so they can go to lots of places. 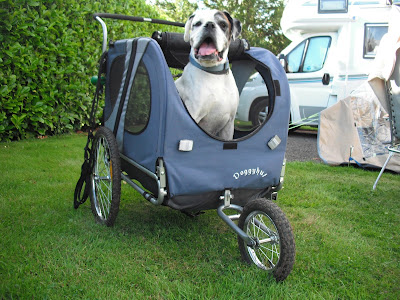 Isn't he just a darling. He is the only dog at home, but he isn't lonely, his best friend is a pet pig. Howzabout that. Good eh!  I just love a happy doggy story. Thank you Lyn for letting me take the photo's. 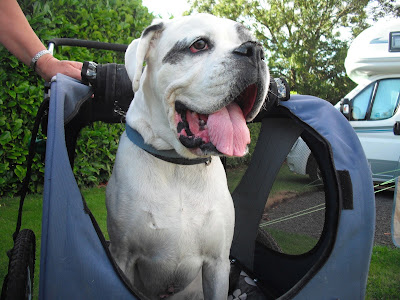 This is the Rescue that Patch came from.
The Lincolnshire Essex and Trent Boxer Rescue.

Right, I'm off out now to take my pooch a walk.
Hope you have a lovely Sunday.
Toodle pip
Posted by Meanqueen at 20:07