Hello. My reading usually takes place last thing at night when I am settled down in bed. Sometimes when I am well into a book, I will make a mug of coffee in the morning and go back to bed for an hours read before I get up. This latest one took me a week from start to finish, though I have to admit I did skim read a section of it in the middle. 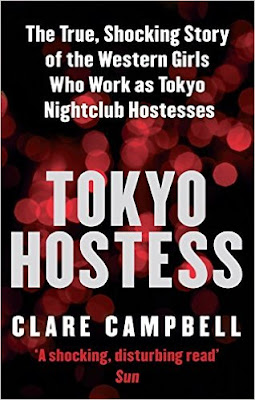 I remember the Lucie Blackman story in the media in 2000, blimey was it that long ago. She went to Tokyo with a friend to work as a hostess in a seedy part of Tokyo to earn extra money to pay off her car loan. It seemed easy money to sit around and drink with rich business men in a nightclub. One day she went missing, and all efforts to trace her hit a dead end, eventually the clues took the police back to a cave which they had previously searched and found nothing. This time they looked further into the cave and found a dismembered body badly decomposed wrapped in bin bags.

Clare Campbell is a journalist who writes regularly for the Daily Mail, and is a contributing editor for a womens magazine. Although this book is not an autobiography and not even a biography, it is a true story, which drew me to pick it up from the library in the first place.

This book delves into the background of Tokyo club life in far more detail than the newspaper articles. There are first hand accounts from other hostesses, and interviews with Lucie's friends, plus extracts from her personal diaries. Some of the details about the hostess way of life and the customers using their services was a bit repetitive, hence my skim reading in the middle.

I felt it was a typical, albeit rather lengthy and elaborately embroidered newspaper article written by a journalist, rather than from a first hand witness who had gone through the experience and could report exactly how it worked. Saying that, it opened my eyes to a different kind of lifestyle on another continent, giving me a peek into another world. The book satisfies my curiosity as to how differently some people organize their lives, which are a world away from my own life. All part of a rich tapestry.

It's a sunny morning, make the most of it, going out. Catch you soon. Toodle pip.
Posted by Meanqueen at 10:39