A day out at the Festival of Thrift.

Hello. Yes, I was in Redcar yesterday for the Festival of Thrift. Apologies to those who live not far from the site, Cherie and Brenda and anyone else up in the north east, but I did not make up my mind to go until 10pm on Saturday night so there wasn't time to make arrangements. I had been mulling it over for a few days, ever since I saw Max tweeting about it. I considered making it into a two or three day jaunt but was undecided.
Then I had a closer look at the festival web site and thought a lot of the activities and entertainment was geared up for children and families. Also advertised was food, workshops, films, talks, and shopping, none of which I am particularly interested in. The only things that did interest me was the arts and crafts and the upcycling, not really enough to warrant the time, effort, and cost to get there and back.
However, when the tweets started coming in after the first day, with reports in the local media, I thought I might give it a whirl. My Saturday was a bit boring so I thought perhaps I ought to get up off my backside and just do it..
The event practically took over the whole village of Kirkleatham. When I arrived at 11.15am the road was blocked by a massive queue to get in the car park. It crawled along at a snails pace. I was not best pleased after driving almost two hours. The road to the main entrance was closed to all except disabled and trades people, so I followed the signs straight on for the car park. Just as we were coming to a roundabout I could see the queue stretching a long way into the distance, I hate queuing. Just off the roundabout to the left is a Business Park, and being a Sunday no one would be working so I thought why not park there. Good move, others had the same idea. It was a few minutes walk back along the road to the entrance. To be honest, I wouldn't have minded paying £5 to park, but I wasn't going to sit in that queue.
The event practically took over the whole village of Kirkleatham, it was spread out over several fields, and there were stalls and suchlike inside the Museum buildings as well. It took me a while to Find Max McMurdo next to the big green Gumtree bus. Those of you who saw Shed of the Year will remember him as being one of the judges. His face regularly comes up on the TV as inventor and upcycler on other programmes. Max has a book out, his first upcycling book and it appears to be very popular amongst thrifty people. If you want to have a butchers at it, click on this Amazon link. No I am not getting a cut in sales, I just think he is a thoroughly nice guy who works very hard. 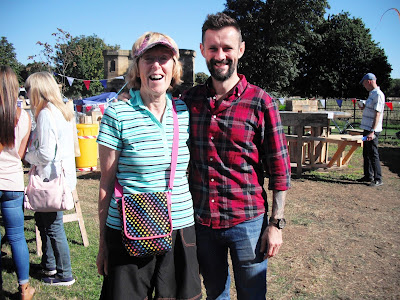 With a steady stream of visitors waiting to speak to Max, I hovered for a few minutes and watched him dish out his words of wisdom to enthusiastic upcyclers. 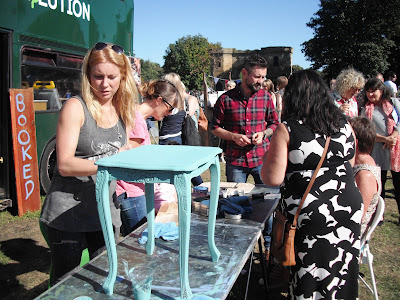 That was tempting, the weather was hot and I could have murdered a pint of cider, but knowing that I had to drive home I supped the watered down apple juice in my bottle brought from home. 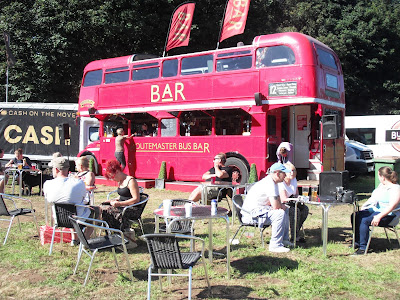 There was much to see and do. The solar powered cinema was closed for lunch, and as I didn't fancy being squeezed into a box with other sweaty people I decided to give it a miss. Nice idea though. 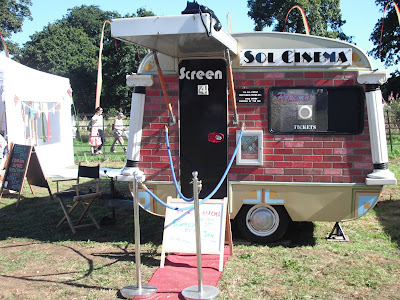 Lots of wood about. Two owls for sale, can't remember how much they were though. 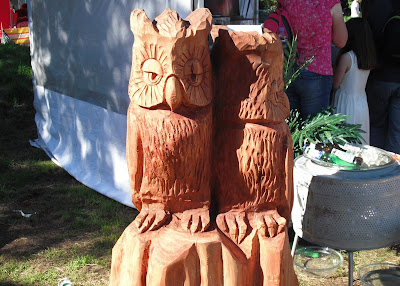 There were stalls with all kinds of craftwork. Blocks of wood with letters carved into them, £6 per letter. I did think of getting my name but I am much too tight to part with £30 on an impulse buy. 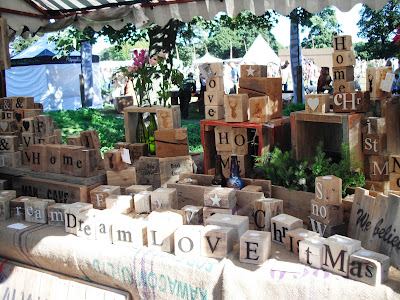 In the stable block there were artworks from local artists. I must say though that there was only one which looked interesting. One stable had nothing in and was lit up with a coloured light. Another had a moving film of horse racing projected onto the wall with a makeshift steeple chasing jump built of branches in front of it. And two others were empty. It was a bit gloomy in there, with not much to look at. 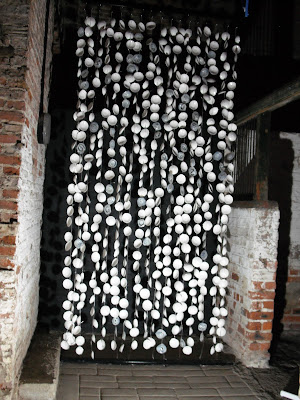 There was a little courtyard with vintage camper vans, which was nice. 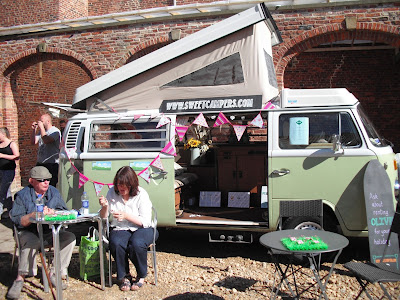 This one was for sale, 7,000 quid if you are interested. Looks fully restored on the outside but you will have to put your own innards into it. Mind you, thinking about it, it has an 02 number plate so it could be a kit car built from scratch. 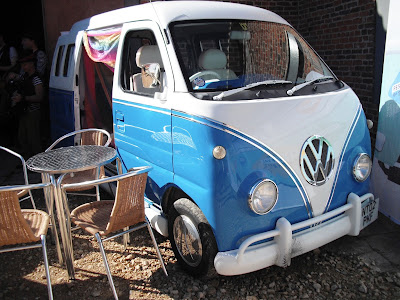 Lots of vintage stalls to browse. One thing I can't understand is that once something is given the 'vintage', label how come the price rises, and rises, and rises. Baffles me that people will pay silly money for old tat, when probably family members will have cupboards full of the stuff stashed away somewhere. 'Spose it's a bit like antiques, the older something is the more valuable it becomes. 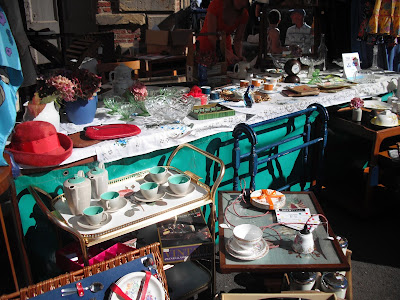 There were various cooking smells wafting around, and long queues at the stalls. If this was a thrift festival, why didn't more people get organized and take their own pack up from home and have a picnic. It was the ideal weather for it. 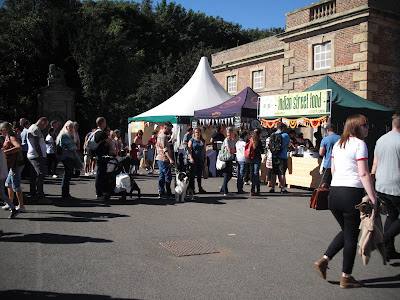 Jam making demonstrations here, and if you took your own fruit you could turn it into jam yourself and take it home in a jar. 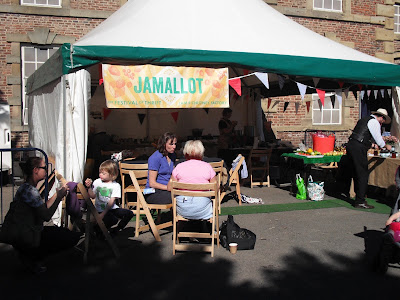 The church was used for sewing sessions. Make a patchwork block and it will be added to a quilt. 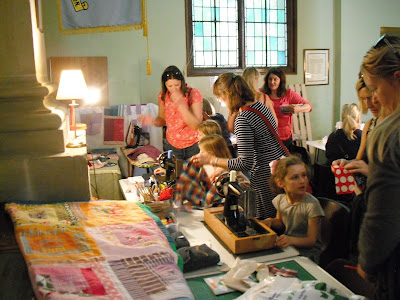 Choose your pieces of fabric and sit at a machine, someone will tell you what to do. The little girls seemed to like this activity. 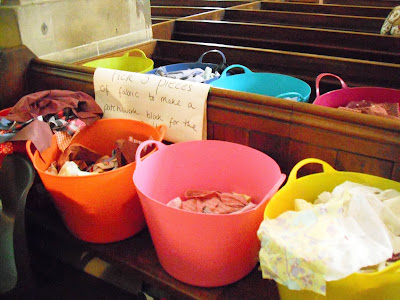 I had a peek in the museum while I was there. 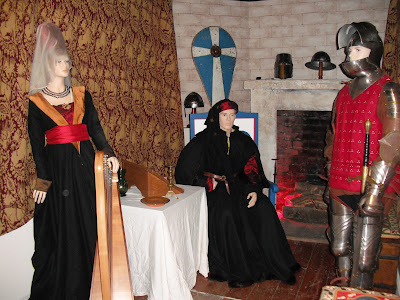 This old dear looks happy enough perched on her stool, with the cooking pot on the fire. Fish for tea tonight. 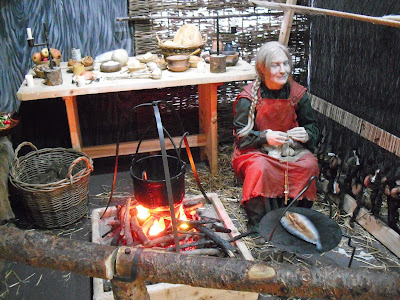 How about a swing in a hammock. Looks very relaxing, the young lady is gently rotating the line of swinging hammocks on a turntable. 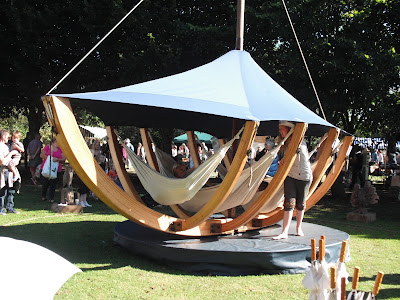 Hairdressing was popular, get your hair done in a vintage style by ladies wearing forties dresses, outside their vintage caravan.  £5 a go. 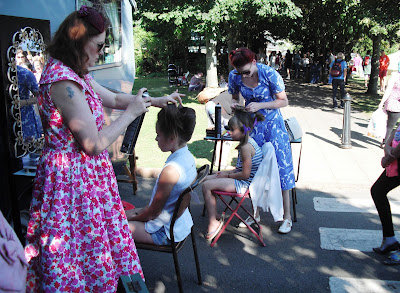 My overall view of the festival was that's it's a great day out, and if you live close enough you could easily find enough to do for two days. There is no entrance charge, free to get in. The entertainment is free, and a lot of the childrens activities are free. There are drop in sessions if you want to attend some workshops. If you have money to spare there are plenty of crafty type stalls which will gladly relieve you of it. I picked up some cards and have checked out web sites which you might like to take a look at.

Scrapstore was there, only they call it Percy Creative Reuse Centre. It's at Commerce Way Middlesborough. Here is their link if you want to check it out.

I left about 3.30pm and decided to take a look at Redcar seafront while I was there, but I'll leave that for another post. Thanks for popping in, we'll catch up soon.
Toodle pip
Posted by Meanqueen at 16:35