A few pics of redcar

Hello hello hello. It's been a wet and miserable day, and now it's getting cooler. I need to wear more clothes. I went back to see my dentist Jim today to have a chat about my tooth which needs some attention. I call him my dentist because he is the one I have been assigned to, he has taken over from Emma who has moved on.. It was up to me whether it gets done sooner or later, so I weighed up the pros and cons, and said OK, lets do it. I went back to reception to make the appointment, thinking it might be in a few weeks time, and the lady on the desk said, how do you feel about tomorrow, we've just had a cancellation. Oh heck, alright then. It was either take that appointment or wait until October, so tomorrow I will have a numb face and will probably be dribbling out of the corner of my mouth.
I've got a few photo's of Redcar to show. It was still sunny and warm and people were on the beach and paddling in the sea. I watched a black spaniel dog chasing backwards and forwards for a while in between it's two owners. It was having a whale of a time. 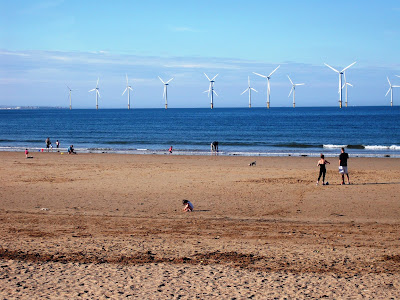 I took a stroll along the promenade, there are a lot of these colourful ironwork pictures mounted into low walls. Two of the penguins have been covered in knitted overcoats. 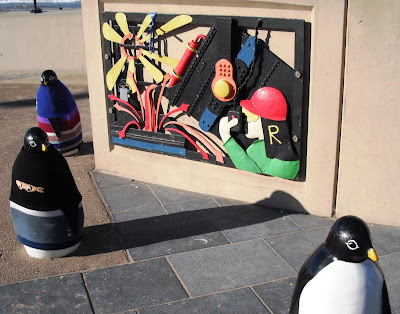 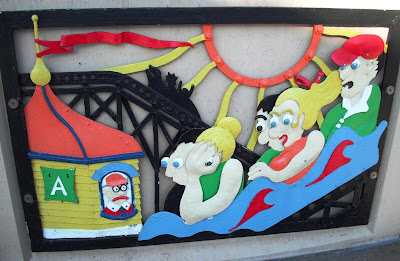 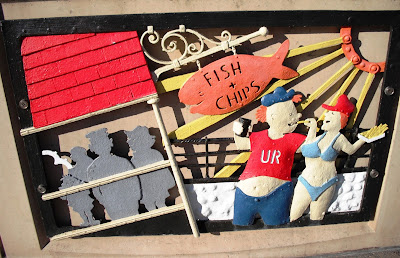 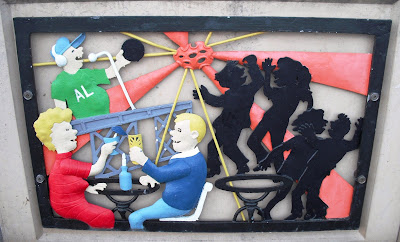 They have a splash feature which spurts fountains of water out of the ground intermittently, the children were loving it, and some of the mums too. There were a lot of sailing boats on trailers parked up, with tractors hitched up to them. 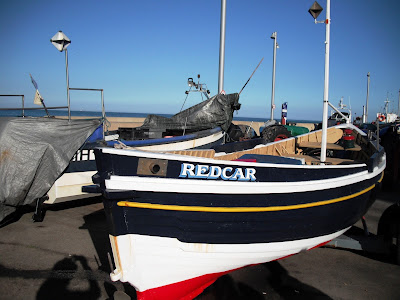 Look at this beautiful building, sadly it is empty and for sale. I do wish someone would come along and restore buildings like this. 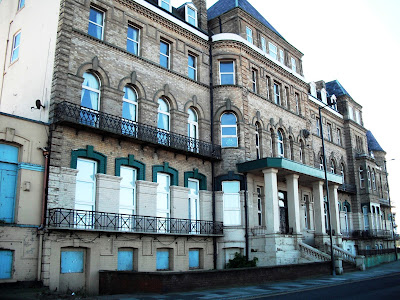 The tide was coming in but it was still warm. 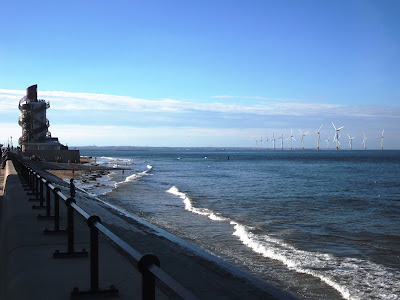 I had a quick look around the town, this is the clock tower at the end of the pedestrianized main shopping street. Sadly some of the shops looked a bit run down with shabby fronts and there were some empty ones. Redcar suffered a terrible blow when the steel works closed down. It must be hard for people to keep up their morale when that happens. I see that some work is taking place, new block paving is being laid which looks very nice. Scunthorpe nearly went the same way, but in spite of a lot of jobs being lost at our steel works, we have been given a reprieve. 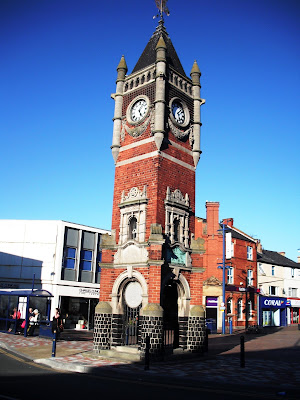 The traffic was heavy on the way home on the motorway, a bit stop and start, so that added a bit of extra time to the journey. Janet had been in to see to the cats so they were alright. It was good to get out for the day, I enjoyed it.

Thanks for popping in, we'll catch up soon.
Toodle pip
Posted by Meanqueen at 19:04