A look back in time

I've had a lovely afternoon at the park. There was a Travelling Historical Christmas Market, and a Craft Fair to look around. Thank goodness it didn't rain, although the ground underfoot was a bit mucky due to rain in the last couple of days.
It was packed out, I walked there, but those in cars found themselves in very long queues to get in. The car park soon filled up and the adjoining camping and caravan site was used as well. In places it was a bit of a squeeze to get through the crowds. 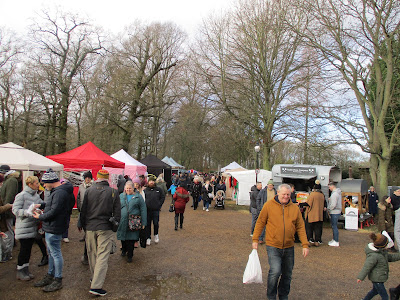 There was a lot of stalls selling all sorts of Christmas goodies. The food stalls did particularly well, going by the amount of people that were chomping on a lump of meat or a sausage in a bread roll. 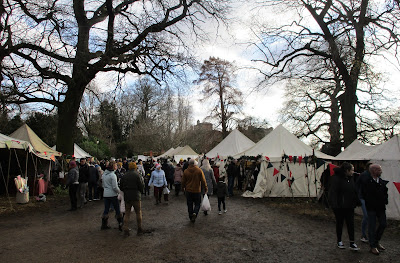 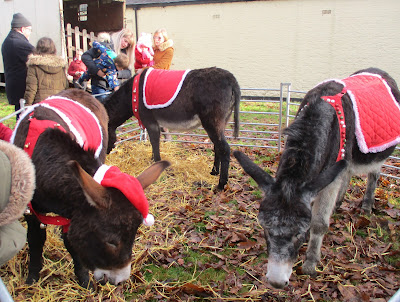 I had a chat with this chappie. He makes pottery, mostly replicas for museums, in case they break the real thing or want to put the genuine article in storage. 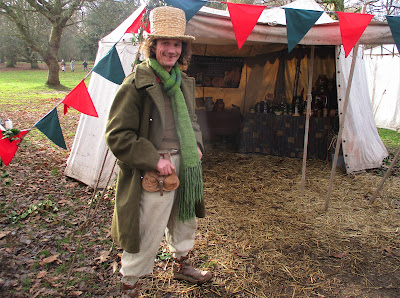 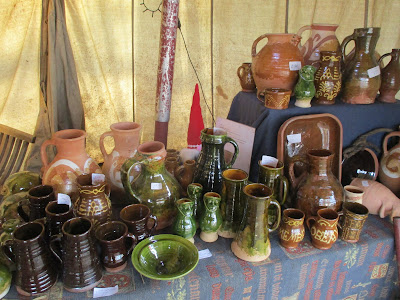 The line up of colourful bottles caught my attention, and I was given a little plastic measure which was soon filled with some lovely tasty mead. I had a few coins and two fivers in my purse not intending to buy anything but you never know. I had just enough to scrape together £12 and chose Brocc's Mead, an authentic currant mead. It is a mouthwatering lively drink, not too sweet with a tangy fruity taste. Cheers. 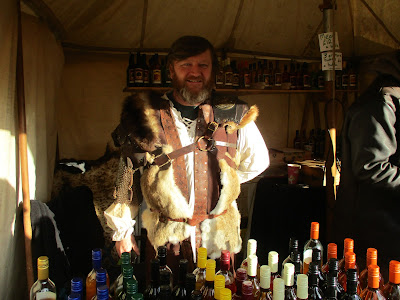 The hall was open and free to go in. I have only been in once before, so it was nice to see it again. 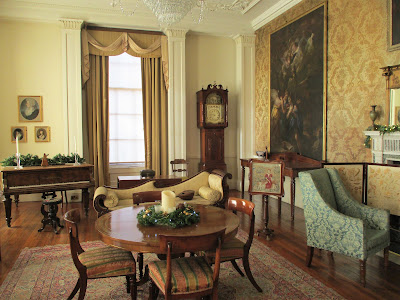 A small table with sewing paraphernalia on it, with a piece of embroidery on a frame. 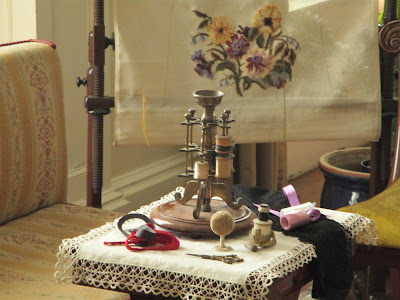 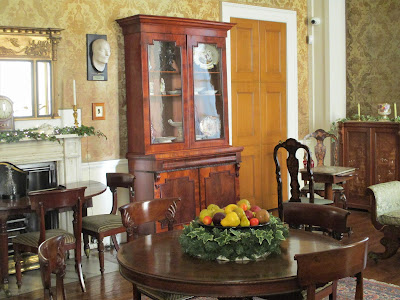 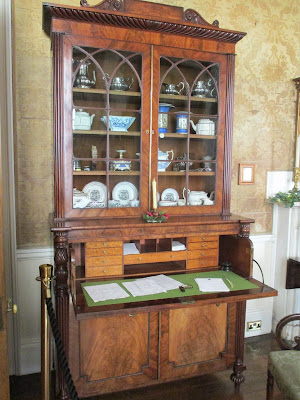 All ready for Christmas dinner. 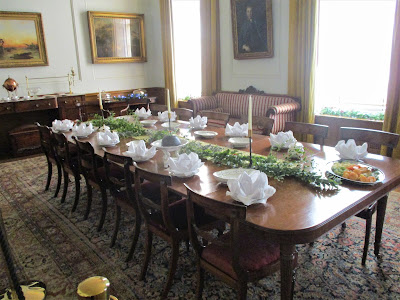 A couple of soldiers back from the war, they don't look too good. 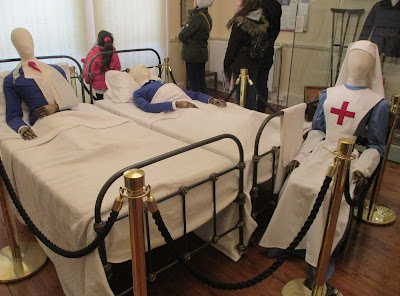 The notice says they had to use a set of steps to get into this bath. It is very deep. 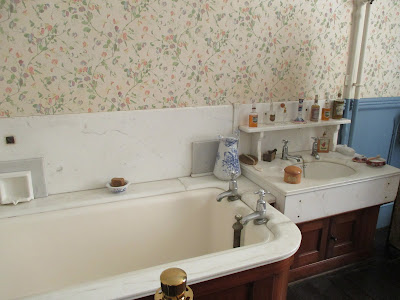 I've never slept in a four poster, I must do that one day. 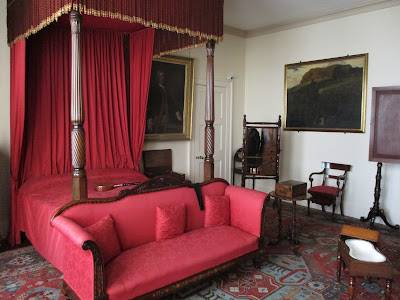 Back outside again and browsing the stalls. Somebody has been busy knitting. 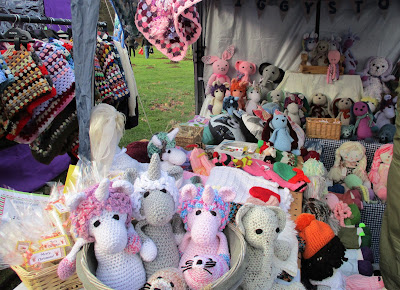 No money left for a beer, I've got the mead. 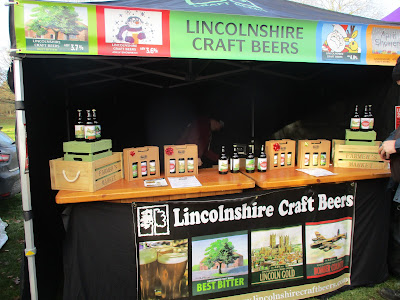 This stall is called, On the Slate. Paintings on rough pieces of slate. Years ago we used to say 'put it  on the slate' when we wanted to buy something and pay later. 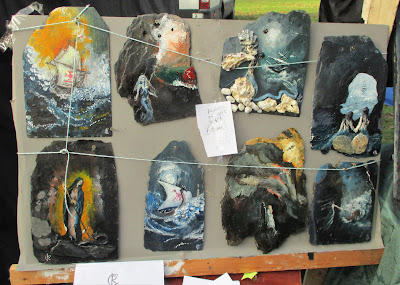 Couldn't resist taking a picture of this doggy. What a sweetheart, all dressed up to go out. 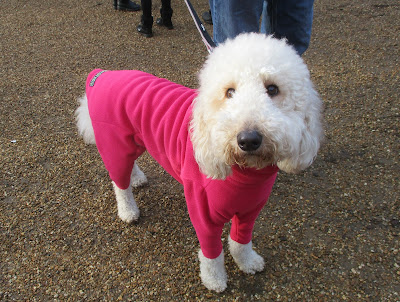 The little trains were super busy with a queue to go for a ride. The track isn't that long, and it's only 20p, the kids love it. 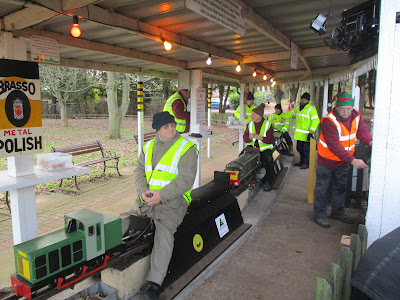 The trains are built and run by volunteers, aren't they wonderful. 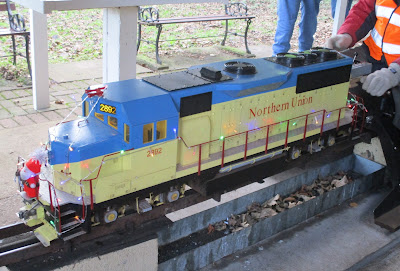 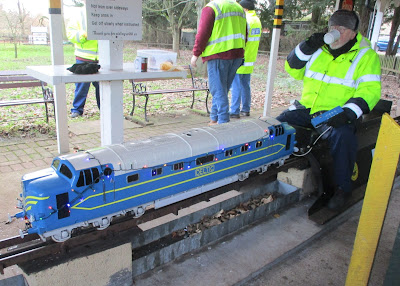 I was getting a bit chilly despite having a big parka coat on with a furry hood, time to go home.

I'm going to have to go a bit steady with this fruity mead, it will be all gone by Christmas, ha ha. I think it would be lovely poured over some vanilla ice cream. I might get some tomorrow.
Toodle pip.  ilona
Posted by Meanqueen at 17:42