I thought I was on the way towards finishing this, but hey ho, this last application is going to take a bit longer. Everything is stuck down, I've gone over it with more black paint, inspecting closely where it needs touching up, and now I am applying a dusting of ochre.
On the previous one I used metallic gold to give it a rusty metal look, but it's not going to work with this one, as it's the wrong shade. The ochre is a better match to the bling on the spoon handles, looking slightly more yellowy. Pity it's not metallic though, but after trying it out I think it's going to work.
Now it's a matter of sweeping over it very gently with the tiniest amount on the brush, then building it up to the right level. I'm aiming for a distressed/antique look, like it's been in an attic for five hundred years.
This is a slow process, I don't want to spoil it by trying to hurry the job up, or I will end up with too much ochre and will have to tone it down with more black. I think you can see on these pictures that it is beginning to look dusty. 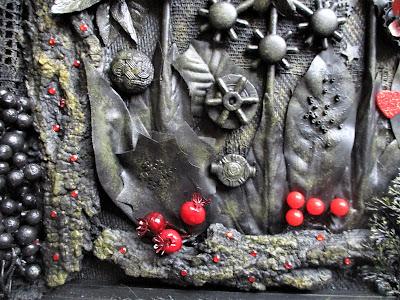 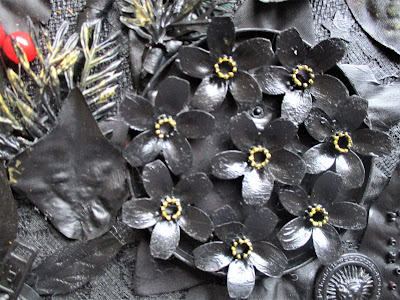 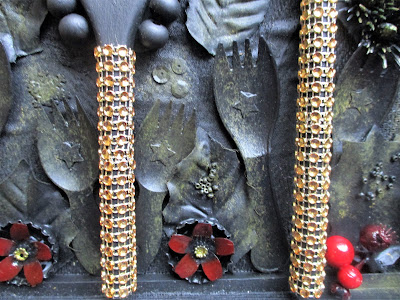 This has been keeping me busy. If I didn't do arts and crafts I would be bored out of my skull. The doors went this morning, a chappie came to collect. I've been sorting through the garage, and lock up shed, for anything else I can give away, or junk to dump. I've put a few smaller bits in the general bin which will be collected tomorrow. There was some plumbing bits and pieces which I have given to the plumber a few doors down. It's good to make some progress in the decluttering department.
A late walk tonight, 9.30pm and it's still light, I'll do the two miles. Toodle pip.  ilona
Posted by Meanqueen at 21:35