I'm off out for an afternoon walk.

After putting the tent up on Wednesday and having a bit to eat, it was time for walkies. The sky looked a bit grey after the downpour so I put my new jacket on in case there was any more rain to come. I think it was about 3pm when I set off. With the long daylight hours there was no need to rush back for anything. I had picked out a possible route on the map. Across the road from the site was a footpath along the edge of a field. Here is a link to the Thornthorpe Caravan Park by the way,  it's midway between Langton and Menethorps a few miles south of Norton/Malton in Yorkshire.
http://thornthorpecaravanpark.co.uk/ 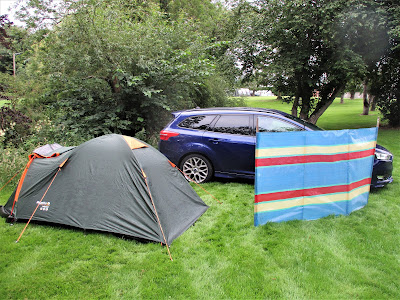 The footpath took me to Langton village. I always like to take a picture of a church. Most churches are not open at the moment so no chance to see inside. 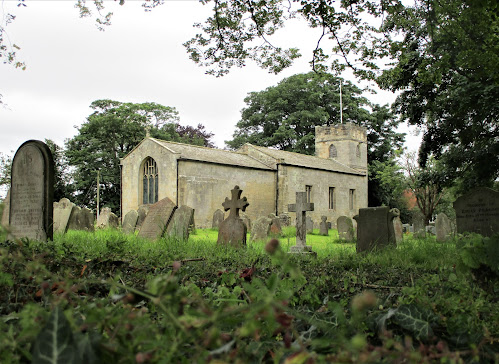 The villages in these parts have lovely cottagey type houses. Very pretty. 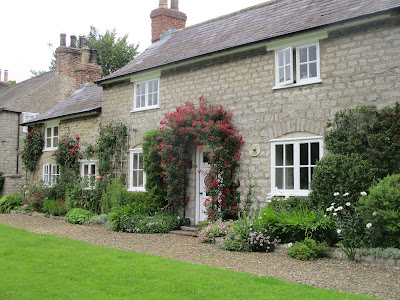 I walked out of Langton on the road. After the downpour the fields and paths were very wet. A lot of paths were very overgrown with weeds, thistles, and nettles. The stiles and gates were not very well maintained. I ended up climbing over gates where the locking mechanism had seized up. At least I know my new boots are waterproof. In fact I stayed on the road for the rest of the walk. I had identified a route that would fit in more or less exactly with the time I had left. I came into Birdsall. The church there sits high on a hill, and can be seen from different angles from the road which bends around it. I thought this view was the best. 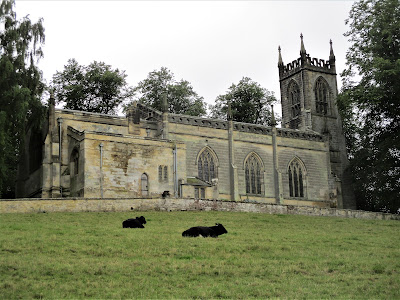 Around the bends I went, and up a hill towards Burythorpe. Just as I came out of the trees I found this amazing view across several fields. I love the blend of different shades of green. This could be a picture perfect basis for an applique landscape. 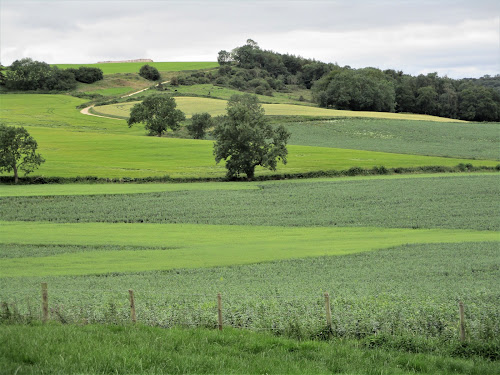 Several cyclists came past me going up the hill, standing on their pedals. That must have taken some hard work to get to the top. Here is the last one lagging behind a bit. 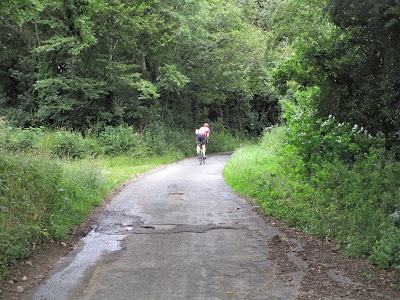 I could see there was a church in Burythorpe but decided not to walk up the lane to see it. However, just as I was walking along the main street I noticed the church between two houses, and thought this would make a nice picture if I zoomed in a bit. I particularly like the bell tower. 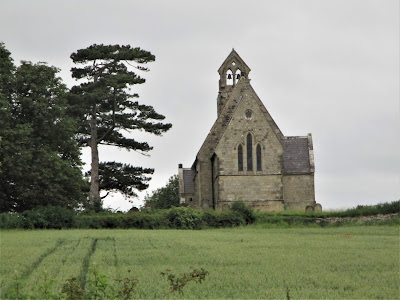 I passed through Kennythorpe, still on the road, and back to the camp site. So, what's cooking for dinner tonight. Easy to warm up on a small camping cooker. The taste was a bit bland so I put a slice of cheese in it, and bulked it out with a slice of seeded bread. That filled me up nicely. 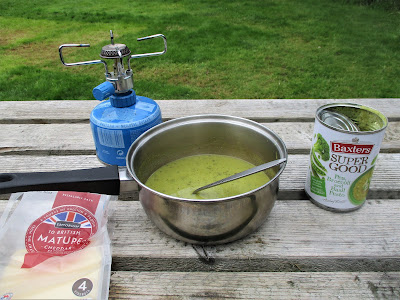 It was getting on for 8.30pm by this time. so I sat in my car and did some stitching on a new art project. Bed time at 10pm. I have checked the miles on bikehike.co.uk and this one today was 7.5 miles. It didn't rain again so I needn't have worn the jacket. I was a bit hot and folded it up and put it in the backpack.
More to follow. Thanks for popping in. Toodle pip.   ilona
Posted by Meanqueen at 15:45

Email ThisBlogThis!Share to TwitterShare to FacebookShare to Pinterest
Labels: camping, holidays/days out, walking